The Apocalypse Is Upon Us

Not because Patrick Reed won the Masters, or because Trump is President, but because I’m posting for the 2nd time in a week. It’s been quite a long time since that has happened but the Masters can do that to someone. I’m going to change things up from the normal tournament wrap up this time. 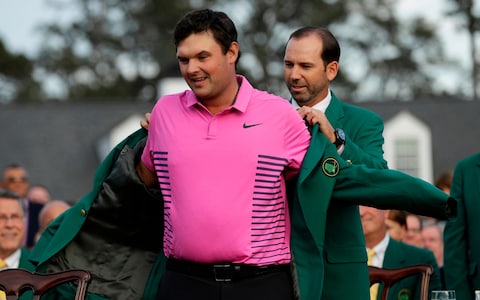 I’m going to take you through every name in the field that made the cut and give you no more than a few sentences, and sometimes no more than a few words, that sums up their week at Augusta to me. Let’s do this starting from DFL to the man selecting next year’s Champion’s Dinner menu.

Chez Reavie – I saw him once, on the third hole today playing with Phil, he sneaked in as Phil’s putt went in to get a read. That’s it.

Kyle Stanley – In 30+ hours of Masters coverage I watched I didn’t see Kyle hit one shot.

Xander Schauffele – MIA, but the Masters newbie made the cut so there’s something to build on.

Doug Ghim (A) – What a week for the Illinois native, Texas Longhorn collegian – he was low amateur, made some eagles to get Masters crystal, and it was highlighted by his Thursday hole out on 18.

.@DougGhim holes out from 179 yards on No. 18 for his second eagle of the day. #themasters pic.twitter.com/wAESqDVCos

Martin Kaymer – I forgot about the Big Gay German (not that there’s anything wrong with that)  just like CBS did.

Kiradech Aphibarnrat – I saw John Daly of the East on the Amen Corner coverage for about 5 shots. He smoked. He chipped. He was angry.

Brian Harmon – That’s too much golf course for Harmon, and even more so when wet and cold. Glad he made the cut though.

Ian Poulter – Lucky to be in, he should have tried to enjoyed it more with less bitching about his lack of practice time, etc.

Mathew Fitzpatrick – Does what he does, no one notices, his 67 on Saturday was the round of the day until the leaders went off.

Jhonny Vegas – There’s a rumor Vegas as on the grounds this week. I didn’t see him after the Par 3 Toon-a-mint.

Fred Couples – Father Time is undefeated, but Fred challenges this notion. With his bad back it is amazing Fred was even walking upright after 72 holes.

Bernhard Langer – @The_Fried_Egg tweeted how Langer uses the angles of the dog legs of Augusta National to compete as he loses distance. Great stuff.

Bernhard Langer might not be able to keep up with modern distance, but he sure uses angles to his advantage. #woke pic.twitter.com/J4z3mU04Cx

Raffa Cabrera Bello – Featured group with Tiger on Sunday, nice opening round. Dude hits it too good to only make the cuts in majors.

Zach Johnson – His 94 second chat with his caddie on 11 was weird. There was tension. Might a caddie shake up be in the future?

Phil Mickelson – Never had it after Friday, until Sunday when the pressure was gone. Admitted he’s running out of time to win majors. Sad face.

Haotong Li – Exciting dude, can get up and down from everywhere. I’d pay to watch him play. Asian Seve.

Daniel Berger – Dude was T32 and I didn’t see him play a shot. He must have been on because I was getting texts about his girlfriend, Victoria Slater.

Adam Scott – Beam me up, Scotty, and find this man’s golf game.

Tiger Woods – He walked and finished 72 holes. He made the cut. He earned world ranking and Ryder Cup points. We didn’t know if he’d play ever again 6 months ago. The entire tournament is a huge step forward and a win for the Big Cat.

Matt Kuchar – Gollie gee, Matt. You looked great Thursday. What happened? Matt and Chick-Fil-A have a lot in common on Sunday at Augusta, they both lose money.

Kevin Kisner, Satoshi Kodaira, Ryan Moore, Bernd Weisberger, Si Woo Kim – I’ll make this one easy, I didn’t see these guys play a single shot. CBS and ESPN didn’t care. And I must have been grabbing refreshments while they came through the online coverage windows.

Adam Hadwin – He is Canada’s best right now, no maple syrup about it. Dude can play.

Branden Grace – He was under the radar all week and didn’t break par until conditions got soft on Sunday. Yawn.

Jason Day – Disappointing. I’m not sure we’ll ever see peak Jason Day from 2015 ever again.

Jimmy Walker – Still showing signs of improvements in health and his game. I’m rooting for you, Jimmy.

Frank Molinari – I still can’t tell how to differentiate between him and his brother.

Webb Simpson – Final round included back to back eagles on holes 7 and 8. Only the 4th guy to every do that at the Masters.

.@webbsimpson1 moves to 5-under par for the day after back-to-back eagles on Nos. 7 and 8 in the final round of #themasters. pic.twitter.com/fKR4lxK69S

Hideki Matsuyama – Still getting back from injury, a top 20 finish isn’t so bad.

Tommy Fleetwood – I expected more from him after Saturday.

Justin Thomas – World number 2, played well at times but was 2nd fiddle to buddy Jordan in what seems like an all too familiar story line.

Russell Henley – I swear he posted a 6 under weekend but you wouldn’t know it from the coverage.

Paul Casey – Goes from playing with Knox on Saturday to near course record on Sunday. Look at for him at the Open.

Louis Oosthuizen – Louis, Louis….we all keep waiting for him to challenge at a major again. Close but no cigar.

Justin Rose – One of the heavy favorites, he was due for a “down” year at the Masters. The bar is high when T12 is a down year.

Dustin Johnson – World number 1 isn’t right these days. I’m not sure he’ll ever win the Masters but Sundays here are more fun with him around the top of a leaderboard.

Tony Finau – The ankle, that’s all anyone wants to talk about or remember, but damn he was good. Final round 66, top 10, he’s punched a ticket for the 2019 Masters already.

Marc Leishman – Dude putts like a motherfucker and should fit into your Masters pool picks every year, just don’t expect him to win it. He doesn’t have the right mindset for it.

Rory McIlroy – Ugh. That sucked. I wanted this one for him, but it was over by the 10th tee. He’ll pick up the pieces, he’ll putt well again someday, but today was tough.

Henrik Stenson – Hank played well for a guy with a so-so record at Augusta. He might have a 2nd major in his future this year.

Cameron Smith – Breakout star, maybe. His back nine 30 on Sunday was nuts.

Bubba Watson – Gerry putted into the bunker today on number 2 on his eagle attempt. That is all.

Jon Rahm – Rambo has all the game in the world, does he have the patience to win a major? I’ll say no.

Jordan Spieth – Par at 18 gets you a shot at a playoff and a course record. And your tee shot hits a tree to lead to a bogey. Even though he shot 64 that tee shot is a bit of a choke. I had an interesting Twitter debate on this, what do you think? Check out the thread below:

Rickie Fowler – Big balls just to hang in there when he didn’t have it early and then pour it on late. No choke in Rick’s game. Kudos to him for making Reed earn it. His time will come.

Patrick Reed – Patrick “Mother Fucking” Reed. What else is there to say about this guy?

He came, he saw, he kicked ass. I don’t root for Pat but I don’t root against him. He played brilliantly for 54 holes and played well enough to survive to day. His putter and short game are lethal. His biggest weapon is his self confidence. He never wavered. I never could have seen this coming and wrote him off as a Masters champ in my prior post because of his record in previous years. Reed had never broke 70 at the Masters prior to Thursday, so of course he posts 15 under for the week to win.

Good for him. I’m glad he’s on our side. I’m guessing Texas BBQ for the Champions Dinner. There’s no truth to the rumor that Patrick will buy his own cow and name it Rory McIlroy.

And with that we’re 360 some days from another week of glory in Augusta. I’ll savor one last pimento cheese sandwich…..

…we’ll watch Live From a few more times, and we’ll think about Rickie’s chances at Shinny. Sixty-seven days until the next major.