DJ At The Riv

I usually love watching a final round at Riviera Country Club – there’s drama, the course is great, and it is a complete 180 degrees from the shit show broadcast CBS gives at Pebble a week prior. Thanks to the weather dumping 3 inches of shit on Southern California on Friday the tourney didn’t finish on time. Add that to DJ lapping the field and the drama was gone before CBS came on the air. With that the West Coast swing was dead and gone but you can’t argue with the results and the champions it gave us. Justin Thomas twice, Hudson Swafford, Matsuyama, Spieth, and now DJ….we’ll take that.

DJ on his A game, there’s probably only a few guys in the world that could even think about keeping up with him and they’d have to be on too. Spieth, Day, and Rory come to mind. Two of those three were in the field but they never pushed DJ. With the win, and Jason Day not having produced many good results over the last few months, Johnson became the new number 1 player in the world. It was a big week for DJ for other reasons as well. His baby mama announced the pending arrival of their 2nd child later this year via her Instagram.

How do you think those two celebrate DJ’s ascent to the top and latest victory?

Dustin Johnson is gonna give Paulina another baby tonight. They're gonna have twins now. That's how it works, right?

That seems about right. Thanks to the weather and late finish away from network TV PG didn’t get her normal post-victory air time. How shameful.

The rest of the field didn’t put up much of a fight, other than Thomas Pieters. The former NCAA individual champ (who won said title at Riviera) shot 63 in the final round and finished T2 with Scott Brown. I’ve got a hunch Pieters wins soon and that may happen as quickly as this week at the Honda.

I’ve tried to stop commenting on and rating golf broadcasts on a week to week basis unless something jumps up and has to be addressed. The broadcasts are generic in nature and don’t change much over time. CBS clearly gave Faldo a green light on making puns with lyrics from songs by Genesis (the band) during the Genesis (the sponsor) Open. He was a bit sneaky with their usage at first but by 4 pm Sunday he couldn’t stop himself. One or two would have been acceptable. Six to ten was jumping the shark….or I needed more beers.

CBS made up for Faldo’s follies by finally making good with their awkward Microsoft touch screen analysis bullshit. They took Dottie Pepper of it, let her follow live golf, and replaced her with Amanda Balionis – formerly of PGATour.com. Amanda has a side hustle with Callaway and knows her shit when it comes to the Tour. Big upgrade for CBS and I hope this wasn’t a one off gig for her. 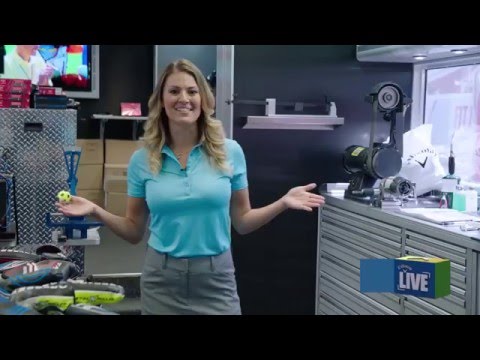 Hopefully we see her at the Masters, the PGA Championship, and other marque CBS stops down the road.  While we’re giving out gold stars for broadcast work I’ll also give one to the Tour and DirecTV for their extra work on the Launch Pad channel the last two weeks. While I don’t understand why they set up shop on the 16th at Pebble, being on the 17th at the Riv more than makes up for it. Rick Smith is on analyzing swings while we get to see launch data from each shot and season stats for each player that comes through during their broadcast window. That is a golf nerd’s dream. I DVR it and re-watch it to get a fix during the week like any addict would. It is like porn for junkies like me.

Spieth Back In The Saddle

Jordan Spieth never went anywhere and played pretty well in 2016. The uneducated golf journos may not have realized that but it is true and his stats back it up. That being said, winning is what makes headlines and his play last week at Pebble put him back in said headlines and began Masters talk all over again. His win was nearly as dominant as DJ’s was this week on the scoreboard, but not in the stat sheet, other than his putting. That’s the only place he needs to be great. His final round par clinic was like watching paint dry but that’s what Mr. Spieth does best.

I’ll only comment briefly on the rest of the week that was at Pebble. Bill Murray gets too much attention. Cut the crap. It isn’t the Bill Murray Clam Bake. There’s not enough cameras on the Monterrey Peninsula course during the first 3 days. And can we get some accurate indices for the ams in the field? Carson Daly won the thing with a 10…he’s not a ten. He’s a sandbagging fuck. And Kelly Rohrbach isn’t a 7, let alone a scratch as I saw her referred to a few dozen times. Single digits capers don’t do this…

She’s easy on the eyes though and thank god she was in the field as Gary Woodland’s partner to give us something to gawk at. Just give her a full 15 next time. She needs them all.