Winter Sucks, I Do My Best To Make The Most Of It

What is a golf nut supposed to do when you live in the Midwest, the ground is covered with 10 inches of snow, and it is 27 degrees outside? You have an epiphany that your garage has 10 foot ceilings and insulated walls that make it possible for you to hit golf balls in there. That’s a start, and something for a desperate man to make the best of. Last year that lead me to drape a net in the corner, buy a range mat, and hook up an Ernest Sports launch monitor to get my winter fix. This year I decided I needed more visuals so I upgraded my garage range with an OptiShot2 home simulator.

My set up is anything but glamorous. First, there’s no actual heat in my garage. I can make it about 20 degrees warmer than the outside temp thanks to a space heater. That made things a little chilly when it was 14 last weekend, but 35 degrees in the garage with a stocking cap on my head and no breeze and I was fine. You don’t need 10 foot ceilings because the OptiShot is usable without even hitting a ball (more on that later) but it does make the experience more realistic and helps you get your ‘winter conditioning’ in. I back out the cars, sweep, turn on the heater, move all the kids toys out of the way, drop the net and mats, hook up the OptiShot to a PC and use my recycling bin as a desk. Nothing fancy, but it does the job and I’m hitting balls in 10 minutes. I cut a spot for the Optishot sensor in my old mat and use that to complete my hitting area.

The recycling bin is a nice touch, I know.

The garden hoses and deck furniture in for the winter aren’t in play for me, neither is the window, but I did hangover shank one wedge (out of about 1000) into the drywall last winter. I suppose that’s there forever. I’m going to try to create some sort of shank shutter for the window for when my drunk neighbors decide they want to tee it up. I also bring out a flat screen TV for a monitor when necessary. Maybe next year I’ll upgrade to a screen with a projector and ditch the net.

What’s In The Box?

Not much. That’s part of the beauty of this operation. OptiShot provides you with this piece of turf with infrared sensors built in, a long USB cord, a foam ball, a rubber tee holder, and some instructions as to how to get their software. The software is simple, you go to the site and access a download with your product code. Done.

The foam ball is worthless unless you’re playing in the house without a net. Hitting off the small turf area with nothing around it can play with your head so I suggest cutting a space into your mat or whatever you’re hitting off of. I’d also suggest being on the same level as the sensor, i.e. not standing on the bare floor while the OptiShot sensor has the ball raised an inch. That’s no way to get better.

Once you’ve got the software and the USB lines hooked up you’re all set. The menus on the program are easy to use. You can create a log in to get software updates and play online. If online stuff isn’t your thing then you can use the practice range or play several courses. Honestly, I could use this all day just in the range mode, but the on course experience keeps things interesting and makes you think about the shots you’re trying to hit.

The simulator is nearly ready to use out of the box, but for best results you’ll need to hit the range and set up your bag and configure your clubs. The sensors pick up your club path and swing speed. You select the club you’re hitting and if you’ve set up your set honestly you’ll get lifelike results. I have my launch monitor next to the OptiShot to check its accuracy and it is within 5 yards on 95% of my shots. It carry a 5 iron 190-195. When I hit it flush on the OS it will go 180 into an 8 mph wind and 205-10 with that same wind. You can also set your settings to indicate the use of a foam ball or no ball, but what fun is that?

My two biggest complaints about the OptiShot2 are next. First, the short game. When you miss a green you have to try to feel what a certain yardage feel like while hitting into a net. The distance the ball will travel also varies on the lie you have. For example, you miss a green short side in a bunker. The OS tells you that you have a 18 yard shot in the bunker. You can see a lip you have to hit it over, so now you have to tell OS that you’re going to hit it higher and then guess at how much harder you have to swing because of the sandy lie. This is probably a better experience when you have a screen to hit into that has the course projected on to it (the full simulator experience). Putting is similar, but you can read the green on the screen, adjust your alignment through the PC, and putt over the sensors with some feel once you figure it out. I do recommend setting gimmies inside of 5 feet. Some of the club path feedback from OS is valuable in analyzing your putting stroke so using the flat stick on OptiShot isn’t a total waste. 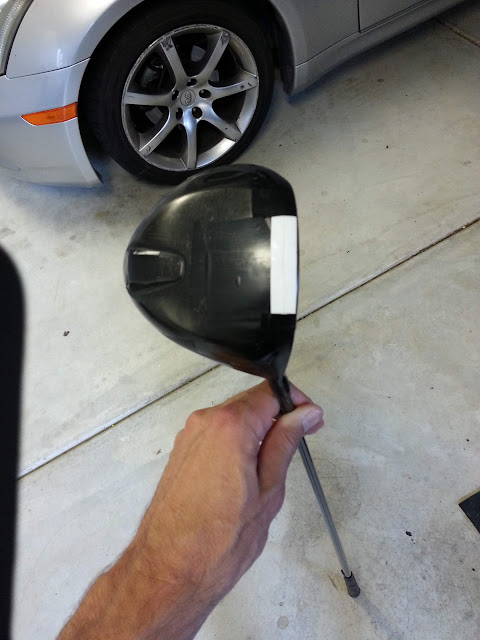 Additionally, there is one huge glitch with the OptiShot2. Luckily there is an easy fix for it. The OS sensors don’t work well with woods that have a black and/or jagged finish on the bottom. Silver and smooth is what works best. I used my Titleist 915 D3 for two rounds with the OS telling me I was hitting a 20 yard push cut on 3/4 of my tee shots. This model is black on the bottom with the active recoil channel. That puts it in the black and jagged category for the OS sensors.

I miss that club right maybe 1 in 5 swings. I thought I was just slashing it and was trying to make corrective swings. The OptiShot feedback said my clubface was open anywhere from 5 to 20 percent. What the fuck? After digging around online I read where several people had the same experience. To fix it you simply have to take a piece of white or silver reflective tape and put it over the unsmooth part of the bottom of your club and make sure it is square/parallel to the club face. That will allow the OS sensors to pick up the club accurately. I added tape and have had no issues since. That is not my pic above, not my hand, club or car either. I used TyVek tape leftover from finishing our basement.

The game comes with some classics, like Cog Hill, both Torrey Pines courses, Bethpage Black, Kapalua, Riviera, and several more. For a fee, either in a package or each separate, you can download bonus courses like Pebble Beach, Medinah, St. Andrews, and Sawgrass. They look good and are pretty accurate (I’ve played a lot of these for real) but aren’t perfect. They also look better when I use a TV as a monitor instead of the laptop. You can see the view from the first tee at the Riv below.

Buying the courses one at a time is a $30 charge. That seems steep when the OS itself retails for about $299 unless you get an upgraded package with nets, mats, etc. Also, most of the courses don’t use their real names. Obviously there’s a copyright issue with them. You’ll recognize Riviera as “Hogan’s Alley”. Bethpage Black is “Long Island Black”. Medinah No. 3. is “the Windy City Club”. And so on. Warwick Hills, an old club that is nothing great today, uses its real name for some reason. Warwick hosted the PGA Tour’s now defunct Buick Open for over fifty years in the Flint, Michigan area.

When OptiShot first launched, both in the original and the second model, the course list included “Sweet Magnolia” – an Augusta National ripoff. The screen shots of that course look as good as the old Tiger Woods video game that had Augusta on it. For unexplained reasons the OptiShot people pulled it from the software in a 2016 update. I suspect the Men of the Masters got wind of the unlicensed use of their club and made some lawyer-ed up threats. Fuckers.

The OptiShot2 simulator isn’t perfect, but it is a lot of fun for a golf nut to have access to for the winter and it does give you good feedback on your swing. I do suggest having a launch monitor on hand to back up the results the simulator gives. At the price point these sell for there is no better option. I picked mine up on Ebay. All in for the net, the OS, and two mats I’m only about $300 invested into it. That’s pretty damn reasonable. If you have any questions feel free to ask in the comments and I’ll respond.