US Am, Olympic Golf, And Wyndham Final Thoughts – All Rolled Into One

Lydia Ko To Show Was The Smart Bet

With the men out of the way the ladies got their chance at Olympic gold this week in Rio. They smartly teed off on Wednesday and wrapped up Saturday and I think that helped them get the air time they deserved from the golf world. With the US Am final on Sunday and the Wyndham final round being played concurrently the medal ceremony would have been buried like women’s golf typically is. Maybe it would have been better off if it had. I’m kidding, but Inbee Park dominating took the gold medal drama out of the round by the time she made the turn to the back nine. I watched to see if Ko and Stacy Lewis would medal, but the gold was off the table.

Park is a Hall of Famer and has been ranked #1 in the world plenty over the last 4 years. But Inbee winning gold in Rio was a huge surprise due to all the shitty/injured golf she has/hasn’t played in 2016. Park hadn’t even broke 70 in months. She began playing in events only to count them for her Hall of Fame numbers then withdrawing week after week after one shot because of her injury. The rest must have done her well as she was aces in Rio. I’m not sure what it says about me but I hate watching her play. Her swing is ugly as fuck, she hits it nowhere and she has no personality. Watching her win isn’t much different than watching the World Championships of mini-golf. Both are all about putting.

Ko was pretty damn good, but she wasn’t in Park’s world on the scoreboard. I’ll give Lydia credit, she played with the weight of New Zealand on her shoulders and gutted out the final round without her A game to pass Stacy Lewis and Shanshan Fang to get the silver medal. Fang kind of dumb-lucked her way in to the bronze. She had no idea what her score meant as she finished. Lewis left her birdie putt short on the final hole to finish one shot out of a bronze playoff. She was beside herself on the final green after tapping in for par. 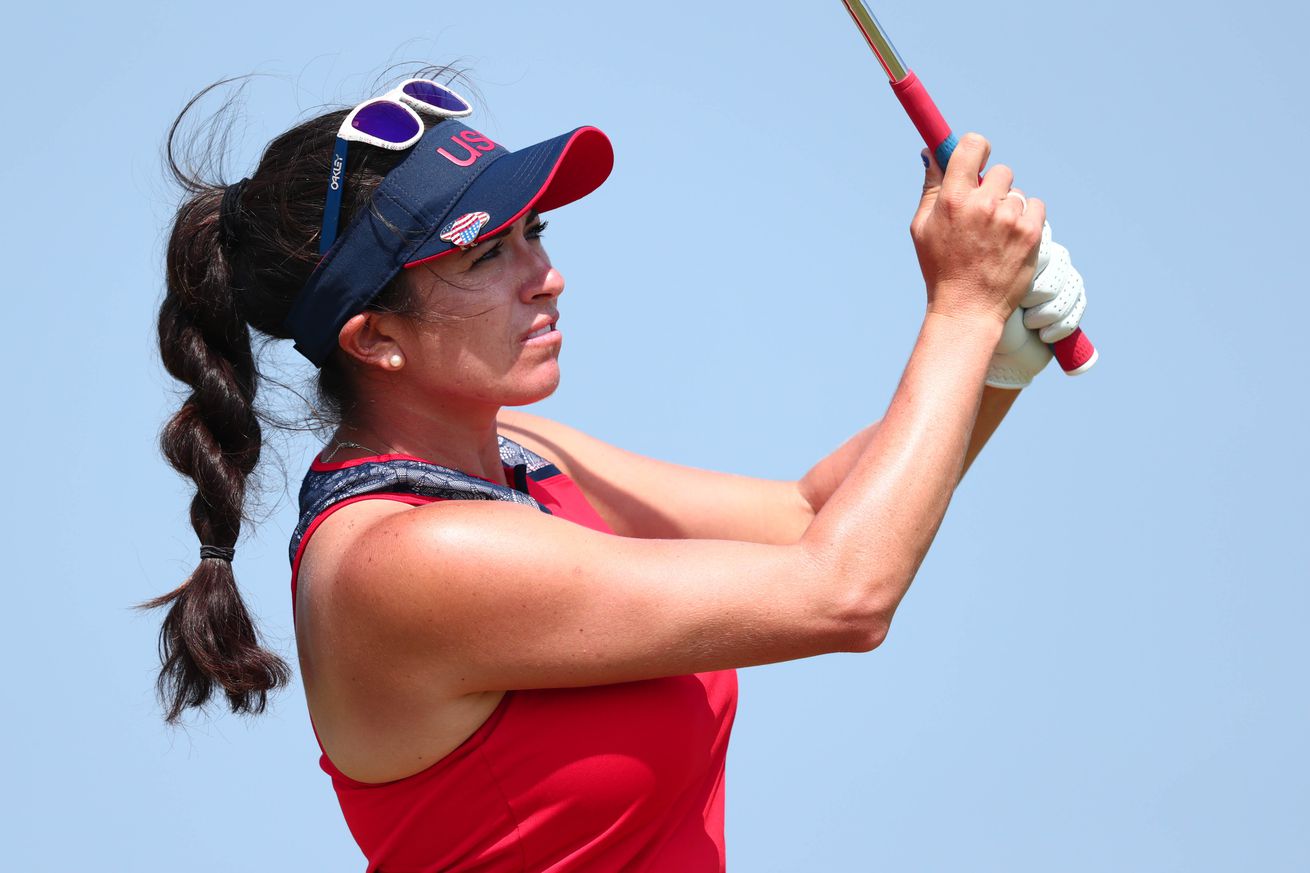 All in all I think having Olympic exposure helped golf a little bit, but it probably helped the women a little more. Shit, they got me to watch. The results say plenty about the state of the women’s game in the US, note no medals. Stacy Lewis disappointed, as did Lexi Thompson. I didn’t expect much from Gerina Piller until she played well enough to find herself in the final 3 some on Saturday. The moment got to her for the last 18 holes. It is cliche to say she wanted it too bad, but that’s exactly what happened. It wasn’t that she choked, it is that she was pressing all day. How could she not with Park going nuts with her putter?

The course Gil Hanse built for two tournaments during the Olympic games once again held up great for the ladies a week after the men stomped all over it. More kudos to Gil for that and I think it is a sign of a great course that it produced such similar results from different players and tees.

Better To Be Luck(y) Than Good

As I noted above the US Amateur was being contested last week in suburban Detroit of all places. The venerable Oakland Hills Country Club hosted 36 holes of stroke play qualifying on both its North and South courses, then the low 64 players advanced to match play. By the weekend we were down to four players that included Brad Dalke, Curtis Luck, and Nick Carlson.

That’s Carlson above. He was the lowest ranked player left in the field after nearly ever round of match play (he was ranked above 1000 in the amateur rankings). He goes to school about 40 minutes away from Oakland Hills and had the home crowds buzzing with great matches and phenomenal shot making. He also made a name for himself by playing with more emotion than I’d ever seen from a golfer playing in such a prestigious event. The diminutive Carlson had adrenaline flowing with every shot. He could often be seen jumping and shouting after his swing or stroke. His story was great, but I wonder if that much emotion left his tank empty when he finally lost on the 23rd hole of his semi-final match.

He had Curtis Luck dead a few times in that match and Luck found a way off the mat and put Carlson away with a two putt birdie on their final hole. The Luck-Carlson match was by default the Championship Match. Unfortunately for Carlson the timing of his loss means no Masters invite, no US Open exemption. Instead Luck gets those as the champion as does the runner up from the other side of the bracket, Oklahoma’s Brad Dalke.

Brad Dalke is in the final of the U.S. Amateur today. You might remember him from this… pic.twitter.com/AgUTsO2p31

Luck beat Dalke handily, 6 & 4 in the final. If he’d lost on Saturday he would have turned pro on the spot, signed for some nice cash with Callaway, and started using exemptions immediately on the PGA Tour after the Fed Ex Playoffs end. He’s basically a pro anyway. He’s Australian. He doesn’t go to college. He plays in big boy amateur events and some pro events back in Oz. How does that work? Who’s paying the freight? His schedule, his travel, and his equipment being all Callaway sure seems fishy to me.

If the dude with the ponytail wins the Am I'm going to kick my dog.

Most U.S. Am champs go on to pretty successful careers on the PGA Tour. I’m not going to forecast that for Luck. He’s a fine player. He’s calm and calculating and has every shot. But I think he won this week more because of his demeanor and experience than because of talent. That won’t beat many professional fields. I can’t root for him anyway until he he loses the man bun thing he’s working with his hair (my dog was unharmed).

I always enjoy the U.S. Am. I like to see the host site for 5 days on TV. I like to see the college kids rip it. And the drama of match play never disappoints. The Fox coverage was pretty good besides Azinger. They continue to lead the way in Pro Tracer use and that is a big plus for junkies like me. I didn’t like the USGA set up of the course very much. They didn’t use the entire golf course and made two par 4s drive-able in the same round at distances 60 to 100 yards shorter than the members play it. Doing it on one hole per round is fine. Twice is a gimmick. And shorting us the chance at seeing the players play a 260 yard par 3 (the 9th) is weak. It was never set up longer than 211 yards.

I’m honestly not that familiar with Si Woo Kim’s golf game, or I wasn’t until I watched him scorch the field at Sedgefield Country Club this week. He’s 21 and is playing his first full year on the Tour. He’s best known as the 17 year old that qualified for the Tour in 2012 but couldn’t play the full schedule until he turned 18 nearly a year later. Because of his age snafu he toiled on the Web.com Tour until earning his promotion last fall. Kim had a fairly successful 2016 going making 2/3 of his cuts with a smattering of top 10 and top 20 finishes. His Wyndham win now puts him back in the young phenom discussion so many tried to make him a part of 3 and a half years ago.

Kim did it all with ease in Greensboro for four days. His trophy run was highlighted by his 2nd round 60. That’s not a typo, that says 60. Dude had a chance at 59. Then he backed it up with a 64 on Saturday! He was nearly mistake free and went on to win by 5 thanks to his final round 67. At 21 Kim is only a few months older than the new U.S. Am champion.

Luke Donald finished T2 in what seems like a typical sneaky Luke money grab finish. Luke’s game has come around of late but he still has no chance of making the Euro Ryder Cup team. He was ranked 90th in the world before the Wyndham. Speaking of late Ryder Cup pushes, Jim Furyk has all but put himself on the USA team thanks to….well, a lot of bullshit. Furyk shot 58. Furyk had a top 5 finish at Oakmont. That is about it. He’s horrible in the Ryder Cup and has no business being on the team based on what he’s done this year. I’ve said my peace but the boys at NLU lay it out real clear. I could not agree with them more.

I guess it can’t be the Shot of the Day when it happened on Saturday, but whatever. Normally on SFG.com we talk about Maria Verchenova because she’s the best looking pro golfer on the planet.

Yeah her, remember her? The Russian broad with great tits. I’d forgotten she still played professional golf. Apparently she dabbles in the professional game on the Ladies Euro Tour. Who knew? Ok, I kind of knew, but I never see her name on a leaderboard. Turns out Maria qualified for the Olympics for Russia. On Sunday in Rio she shot a course record 62 (!!!!!!!) with the help of an ace.

That was enjoyable. Did her boobs shrink? Great shot. I liked that she had no idea it went in until it was confirmed over the radio. That might put her in the running for September’s Up & Comer.

That is a full week, a helluva week of golf. But now big boy golf picks back up again with a vengeance. The Fed Ex Cup Playoffs start this week on Long Island’s Bethpage Black course. That’s almost like getting a 5th men’s major for the year. The Black won’t play like it does for U.S. Opens, and you’ll see plenty of birdies with the 6th hole likely playing as an easy par 5 instead of a tough par 4, but there won’t be anything too easy. The New York fans will make the week fun. I’m not sure why but this one feels like a Jason Day win. I’ve played the Black twice so I’ll also be putting out a course review sometime before the event starts. You’ve been warned.

2 Responses to US Am, Olympic Golf, And Wyndham Final Thoughts – All Rolled Into One