Anybody Heard From Tiger Lately?

By now you’ve likely heard the latest Tiger Woods saga. This post is a bit late to it. Excuse me as I’ve been busy with my day job. Life happens. The short of it is that late last week some various media types reported that Tiger’s comeback was on hold and that he’d suffered a set back. The report was that TW couldn’t walk much and had to lay flat just to be in a car. Earlier this week everyone is moping around about Big Cat being done, gone, retired, etc. Tiger’s agent reported that TW was fine and there was no set back he was aware of. But no one believes Steinie. He’s a huge sack of shit. He’s an agent so that statement is probably redundant. Then yesterday Tiger tweets this:

And the Twitter explodes! That is now the most analyzed swing taken on a simulator in the history of golf. Golf Channel, every website, every blogger, every Tweeter….they all took their swings at a hot take. The thoughts were the standard ‘what does this mean? will he be back for the Masters? can he play Bay Hill? is the set back rumor bullshit?’ Relax. Everyone take a breath. Tiger is a playful guy. This was completely staged to take a shot at a report he thought was bogus. It means absolutely nothing other than he’s not in bed and he can stand upright and make a swing.

He’s not playing the Masters. After that no one knows anything, not even him. While he might be feeling well enough to swing that doesn’t mean he’s ready to walk and play 72 holes in any tournament. His issue coming back from injuries of the past has been that he’s come back too soon when he should have let his body heal. I think he’ll make sure that doesn’t happen this time. Word on the street is that Tiger is expected to be at Davis Love’s Ryder Cup soiree on Thursday night with 25 other possible American players. He is a vice captain, after all. I expect some rumors will come out of that about the status of his health that give us a little more clarity.  There’s another rumor that TW was hitting drivers last week too. Stay tuned.

Ian Poulter is playing in the Honda Classic this week. After round 1 he is 1 over par and tied for 40th place. Remember, this is the tourney in which he went full shankopotomus last year and melted down and out of contention during the final round. Poulter made some minor news in an interview with PGATour.com in which he guaranteed he would make the European Ryder Cup team. Read that again. He’s not talking about being picked by Darren Clarke, he’s saying he’ll make the team on points/merit. He might want to re-check the standings. He’s not even close with roughly 6 months to go. He’s 29th! Two spots behind Dick Bland. Who? Great name though. 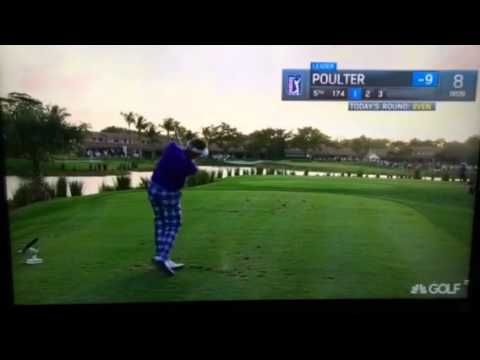 Sergio Garcia and Graeme McDowell are also on the outside looking in at the Euro standings right now. GMac has already won in the 2016 tour season. He and Garcia are far more likely to move up the standings and qualify for their team from what I’ve seen. Poulter, in my opinion, needs a miracle. I think him guaranteeing his spot will put even more pressure on him to play well and make it. We know how he responds to  pressure he puts on himself. Poults should have kept his mouth shut, but why would he start doing so now?

Thursday At The Honda

Speaking of Sergio, the Honda Classic started today and guess who’s co-leading after a 1st round 65? You got it. El Nino himself. After an ugly missed cut a Riviera, a course he usually plays great on, he seems to have found something en route to Florida. He holed out from about 140 yards on his 2nd hole for eagle. That never hurts to kick start a low round. Former Honda champion Michael Thompson tied Garcia just before darkness suspended play. Rickie Fowler is a shot behind at -4. There’s a whole slew of big names lurking at even or better as the weekend looms. Rory is 2 over, FYI. Alex Cejka shot a one over 71 on Thursday. “Since when to I give a fuck about Cejka?” is what you’re asking yourself right now. You don’t, but you do today because he hit the Shot of the Day.

The volume at the 17th hole has been maxed out. https://t.co/WWLXpCA2YH

Unless they happen at a major I usually don’t get too worked up for an early round ace. Cejka’s is a bit special. Why? In the last 9 years since the Honda moved to the PGA National course some 300+ balls have found the water at the 17th hole. There’s never been an ace in tournament play. There hasn’t been one at the par three 15th either. No shit. Good for Cejka for breaking the hymen. The ace was his 2nd of the season.