Duf-Daddy Is Back – Final Thoughts On CareerBuilder Challenge

Just Typing ‘CareerBuilder’ Up There Makes Me Hurt Inside

Can’t the Tour vet their title sponsor and make tournament names a little more reasonable? I’m dead fucking serious. Call it the Bob Hope presented by whatever douche sponsor you want. Then the rest of us can still call it the Hope and millennials will still know what we’re talking about. End of rant. Outside of the tourney name the Hope was a great event for all to watch while checking in during football timeouts. Bitch Tits was swinging and scoring well, Kevin Na sort of contended and play still finished before dark, and Jason Dufner putted lights out on his way to a dramatic victory. What else could you ask for? 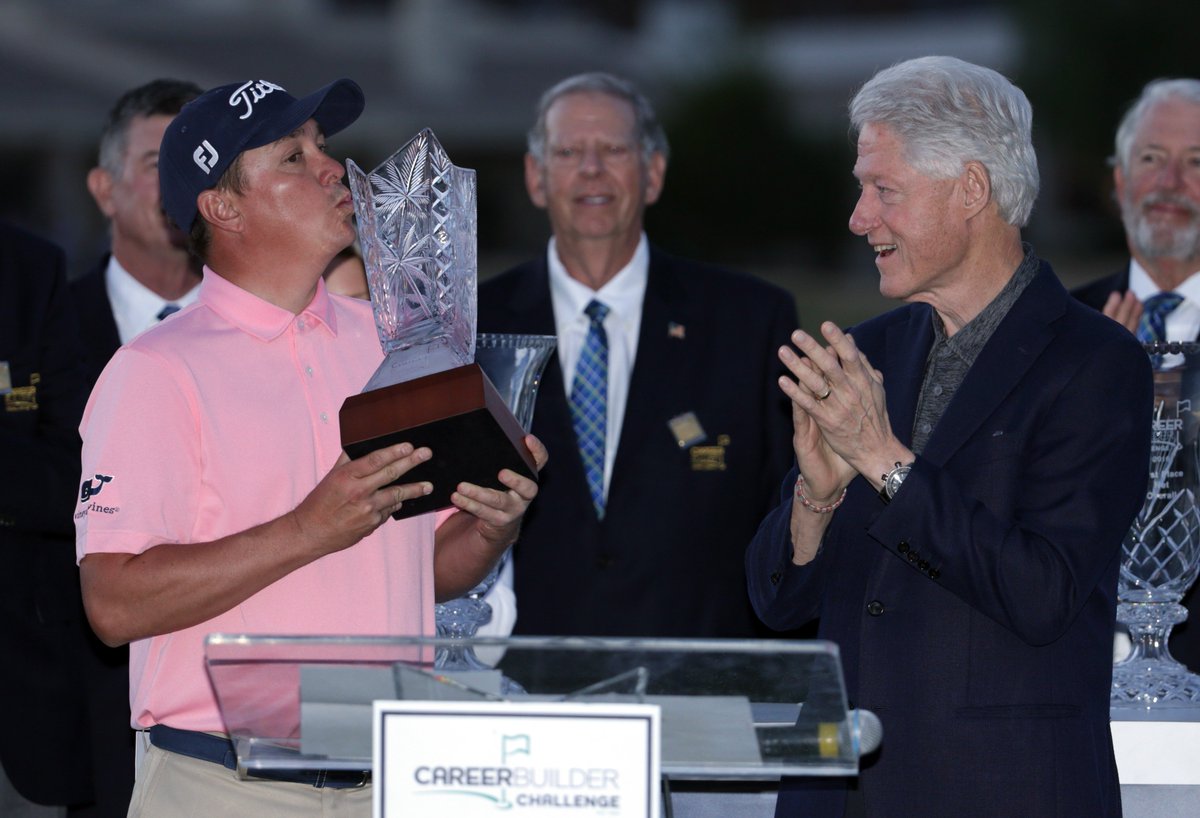 You still have Amanda’s number?

After making every putt he looked at for 3 days, Duf’s putter woes were back as he finished his Sunday front nine without a birdie. That didn’t last long as he birdied 10, 11, and 12 to start the back. After a birdie on 16 he was again tied for the lead with short knocker and Baby Gap shopper – David Lingmerth. The diminutive Swede posted 25 under, thanks to weekend rounds of 62 and 65, just a few minutes before Dufner hit his tee shot at the par three 17th.

The Hope tourney has typically been played at 3 courses, with the original PGA West course being the home of the final round. This year the PGA West Stadium course replaced it in the rotation for a reason I’ve yet to unearth. The Stadium course, like its TPC Sawgrass cousin also designed by Pete Dye, has an island green on it’s 17th hole. This one is surrounded by rocks and nicknamed Alcatraz.

That’s the shot Dufner faced while tied for the lead on the 71st tee. Several players rinsed their balls in the hazard thanks to wayward shots. Dufner set up for a cut and hit a hook and the result could have been a disaster. His Titleist caught the corner of the green and rolled through it into the rocks. He nearly holed his miracle recovery shot as it slammed the pin dead center and stayed out of the jar. Easy par. After burning the edge of the cup for birdie and the win on 18 Duf and his tiny challenger headed back to the tee. Duf found a fairway bunker. He laid up while Lingmerth hit the green and had a birdie try. After Lingmerth missed Duf had this 10 footer to keep his hopes alive.

Big stones on that guy. But honestly, that was probably easier to make knowing he had to. He killed it through a lot of the break. Great putt. And that gentle toss of the ball into the H2O…..that’s why we love Duf-daddy. On the next playoff hole both players missed the fairway and Lingmerth tugged his approach into the hazard. Ball game. Duf wins. And for the first time in 47 tries he’s back in the winner circle again.

You’re damn right I went there. It had to be a long 2.5 years for him. His ball striking was great, but it usually is, if he putts like this for 2016 he’ll win again. The U.S. Ryder Cup team could use some of that. He’s a fucking gamer.

The divorce, his ex, I’m not going there today. There’s still not much information about it. He and his game will probably be better off without her. Today was step one in showing that.

You can’t play much better than Lingmerth did for the weekend. He was trying to validate his win at last year’s Memorial. There’s been a lot of fluky wins in Tour history. A first time/one time winner could be just that. A two time winner throws the ‘fluke” thought out the window. You’ve proven yourself twice. You know you belong. Of course Lingmerth belongs. He’s been in enough close calls and has a win. He’s a great player and he’ll be representing his country in the Olympics because of it. I’m still shocked hit hit it in the drink in the playoff. He’ll be back. Take note fantasy nerds, this is his 2nd playoff loss at the Hope. He’s a value pick in Palm Springs for the next 3 years.

Phil Mickelson made his first start of 2016 at the Hope and he didn’t disappoint his fans. His T3 showing due to 68-65-66-68 splits equals the best start he’s had to a season in years. Bitch Tits credited his play to all his work on getting back on plane so he can feel the club face…blah blah blah……huh? You’re one of the 10 best players ever. You’re a wizard with the club. What this sounds like to me is a shot at Butch Harmon who he no longer works with. What it really means is he wasn’t putting in the work with Butch over the last 15 months or so. He probably started tuning Harmon out and need to hear a different voice. Makes you wonder how Bones has stuck…..oh wait, he never hears what Bones is saying. And Phil didn’t got low for four days because of his swing. He did it largely because he holed out from off the green five fucking times in four days. Or was it more, I lost track.

"Phil the Thrill" gives the fans a reason to cheer yet again. #QuickHits https://t.co/fAkqoyNOpv

Like I said, he’s a wizard. Patrick Reed won the Hope a few years ago. Big Pat had been in the top 10 for his last however many starts world wide dating back to last fall. That means he was everybody’s pick to win this week. He tied for 56th place. What the fuck? Of note was Kevin Na finishing 3rd with Bitch Tits and Andrew Loupe. Why is that noteworthy? Because dude shot a back nine 28 on Saturday afternoon for his round of 62 to jump up the leaderboard.

Different tournament (from Abu Dhabi), different SOTD. This one also comes from the champ. You know it, you saw it, Duf on the rocks please.

He got a bit of a bad break when he hit the green and the ball ran through to the rocks. But he got a good break that it stayed up and wasn’t up against the stones. As he told Golf Channel, he played it like a tight lie on firm ground like you’d see at the British Open. To nearly jug it though….shit. If that goes in the tournament is over right there and the shot goes on to be a nominee for Shot of the Year.