The Shutters 2015: Player Of The Year

I’m sure when the Shutters (my year end awards) started you weren’t expecting them to go nearly two weeks without an award being given out. Shit happens. I had to leave town for a bit last week and the hotel’s wifi wasn’t very accommodating. None of that matters now as regularly scheduled posting returns. And back to get things rolling again is the Shutter for Player of the Year. You think this is no contest? Think again.

Jason Day – Mr. Day had this Shutter locked up as of September 20th when he won the Western Open…..errrr…..the BMW Championship…whatever the fuck they call the 3rd leg of the Fed Ex Playoffs. That was his 5th win of the year and 11th top 10. Of those 11 top 10s, 9 were top 5 finishes. He won his first major at the PGA and also had a top 10 finish at the British and U.S. Opens. While that major record for this year doesn’t stack up to one of his competitors, his resume would easily win the POTY award for 90 of the last 100 years. His wins at the Farmers, Canada, the PGA, Barclays, and the BMW are all top notch fields and only the BMW had a field smaller than 120 players.

Day also knocked up his wife and had a daughter earlier this month. If you’re scoring at home, which he apparently was, you can easily figure out that the little girl was conceived right around when JDay won the Farmers Insurance Open. Did they name her Torrey?

Rickie Fowler – He didn’t win a major, but the way he won the Players Championship and the Scottish Open give him a lot of street cred and make him a nominee for this award. Hey, sometimes it is just nice to be nominated. He also won the Fed Ex event in Boston and finished in the top 10 in 33% of his events for the season.

Rick has zero percent chance of winning this Shutter. ZERO. He had a nice year, but face it, I nominated him because I wanted to show you another pic of his girlfriend, Alexis Randock (are they still together?). Cleavage in a Masters caddie jumpsuit? That might be the sexiest thing a golfer could ever see. Don’t feel bad for Rick. He has the Shutter for Round of the Year to keep him warm at night.

Jordan Spieth – Welp….you knew his name would be here. Jordan is the obvious front runner for this Shutter. In modern golf only two mega seasons of Tiger Mother Fucking Woods surpasses what Mr. Spieth did in 2015. You know the numbers. Two majors, 2nd in another and 1 shot out of a playoff for the major I haven’t mentioned. Five wins in total. A Fed Ex Cup. And 15 top 10s out of 25 starts. Don’t discount that stat. It means a lot in terms of his consistency outside of what he does when he brings his A game. Where does he lose points? Good question. He’s the Golden Boy, what are his faults besides a receding hair line? This.

When Jordy talks to his ball I find it beyond humorous. I’m sure it is some kind of nervous habit he developed playing competitive tournament golf in his youth. I’ve seen lots of kids do it, but they typically grow out of it by college. His ball talk also gives you an inside look into his competitiveness. He wants the most out of every shot he hits. His way of getting more after he strikes it is to have a chat with it. I find it annoying, but it obviously works for him. Am I nitpicking? Fuck yes I am, but he’s the Golden Boy. He’s better than that.

Lydia Ko – There’s no gender barrier for a Shutter. No way. Lydia’s 2015 might not have been noticed by the general public like Spieth’s was, but that’s because her tour gets no love from anyone outside of our cozy little golf world. Ko’s numbers are similar to Day and Spieth’s. Twenty five starts, 16 top 10s, 6 wins…..but only 1 major. That last number is going to be her downfall. 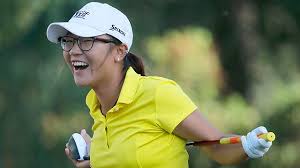 Like Spieth, she’s a young phenom who has risen to the top ranked spot in the world rankings for her gender. Unlike Spieth, she’s not always her best when the moments are the biggest and brightest. She’ll be there someday. She’s too good in every other aspect of her profession to not figure out how to fix that short coming.

Well, we can safely say not Ko or Fowler, for all the reasons I’ve laid out above. I really wanted to give this to Day. His win at the PGA Championship followed by his scorching hot close to the season had me leaning heavily in his favor. I’d nearly forgotten how good Spieth was at Augusta. I also tend to discount his U.S. Open victory because of the way Dustin Johnson handed him the Championship. Day also gets some extra credit for his wins because he had them against stronger and deeper fields. Jordan’s win at the John Deere was against a pretty weak field. The Masters field is fairly limited. And the Tour Championship only has 30 players in it. If Spieth hadn’t grabbed the Tour Championship I’d be handing the Shutter to Day for sure.

Fuck it, I still will. I can’t deny that Jordan’s season was fantastic and a top 5 year of all time. But who Day beat and how he beat them, bouncing back from Vertigo at the U.S. Open and heartbreak at the British Open is what won me over. Did I get it wrong? Probably. Did I give the Shutter to Day just to get a reaction? No. I really believe in this decision. On paper it is Jordan’s award, but SFG doesn’t work in that world. Voice your opinion. Hit the poll and/or leave a comment.

2 Responses to The Shutters 2015: Player Of The Year