As far as we know, Tiger Woods is completely healthy yet we have no idea if he will enter the Masters that is 15 days away. That thought is hard to fathom, but is it really any different than where he was in 2010 when TW was in sex rehab and had not yet said what his Masters plan was? What we’ve found out since the 2010 Masters is that Tiger’s decision to play that year essentially cost him his marriage to Elin Nordgren. She was willing to give him another chance to work on their relationship if he could put her before golf. Think about that. He ended a marriage to the mother of his two kids for another shot at major glory. He was ruthless. 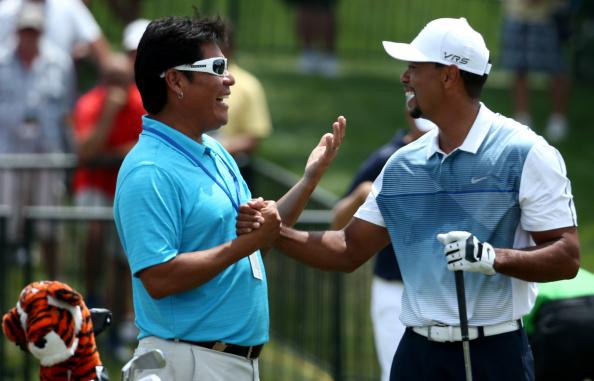 Flash forward to 2015 and we’ve reached the point where the greatest player of our generation has lost his confidence to the point where he might not play in the Masters because he doesn’t know if he can compete. Fuck me. That’s pure crazy talk, but it is also exactly what is going on in his head. In five short years he’s completely lost his edge, but I suppose that is better than him being delusional. If he doesn’t show up to Augusta, stick a fork in him. His superior mental toughness that made him what he was has left him like Elin did and it will never return. The scar tissue is too thick. There is no coming back.

Those are some pretty dark thoughts, but they’re very real right now. The one glimmer of hope for Tiger fans is that Notah Begay thinks the odds of Tiger playing have improved. Begay put a number on it today saying it was 50/50 that Woods would play. I poked fun at those odds on Twitter because those are the mathematical odds of any outcome. Notah didn’t tell us anything, nor do I think he knows anything. We’ll find out soon because Tiger will likely need to let the Men of the Masters know by early next week if he’s going to show his mug at their invitational. They’ll need to know to plan accordingly. Stay tuned.

Fish Out Of Water

The reigning Masters Champion must be contractually obligated to do a New York press circuit two weeks before the year’s first major. I believe Adam Scott did it last year. And why the hell else would Bubba jump at the chance to be in the Big Apple for 3 days? Gerry did every popular show you can think of and took to the town with the young female Drive, Chip, and Putt Champion who’s name escapes me. First stop, the Tonight Show with host Jimmy Fallon, where he played a little game of Pie Golf.

Did you see Watson check out Jones’ when he shook her hand? Run it again. Hey, how can you not? She’s got great…pies.

And did that fucker cheat at Pie Golf? I think he did. He played out of turn and gained an advantage. I think he also looked around for Ted Scott when he missed on his first shot but had no one to blame but himself. Weird.

Watson also discussed his strange burrito habit with Jimmy after Pie Golf. He said in 2012 when he first won the Masters his wife wasn’t there (must be why he wore the same outfit every day too) because they’d just recently adopted their son. Therefore, he ate whatever he wanted, which was a burrito or two everyday. In 2013 he didn’t win with the Mrs. there giving input on his meals. In 2014, with the wife in toe, he went back to burritos and won again. Sounds bizarre, but this is Bubba we’re talking about. It also sounds like a future franchise, Bubba’s Burritos. Did he just tip us off to the Champions Dinner menu too?

That evening the Tonight Show also featured the Villanova pep band chick that was caught crying on camera when her team lost over the weekend. So she and Gerry bonded over something they had in common with this photo op.

I guess its good that he at least knows he’s a crier.