Hahn Gets 1st Win At The Riv: Final Thoughts On Northern Trust Open

The PGA Tour’s West Coast Swing had a near major break out at Torrey Pines two weeks ago and saw more of the same this week at Riviera. On Sunday the rains came and softened a firm and fast golf course, but the scores didn’t get lower. The old lady that is the Riv just got saltier. When the day started the 2015 version of the Northern Trust Open looked like a 2004 U.S. Open with names like Vijay Singh and Retief Goosen at the top. It ended with journeyman James Hahn holding the trophy.

As you might know by now, Hahn nearly gave up the professional game 6 years ago. He four putted his final green at Q-School to narrowly miss becoming a PGA Tour member. In yet another lesson taught to all of us about perseverance, Hahn never gave up on his dream and fought his way on to the big tour by earning his credentials on the Web.com Tour. The kid from Cal-Berkley, who prior to today was best known for his 2013 birdie celebration in Phoenix, has now legitimized everything he’s ever dreamed of as a golfer by collecting his first PGA Tour victory.

Hahn’s victory didn’t come easy. He, Paul Casey, and Dustin Johnson survived Riviera by posting a four round total of 7 under while the rest of the field made mistakes around them. In the playoff the threesome made gutsy pars on the brutal 18th hole and moved forward to the short and nervy 10th. Casey only managed par after hitting the best tee shot of the lot. Meanwhile, Hahn’s and Johnson’s birdies from the thick cabbage left of the green would have made Houdini blush. With Casey eliminated the (now) twosome moved on to the par three 14th to continue their duel. Johnson struck first with a 6 iron to 10 feet. Hahn followed with an approach shot to 18 feet. Advantage Johnson, or so it seemed. Hahn’s less accurate shot gave him a chance to putt first. He drilled it, then stood on the green while Johnson prepared his stroke. Hahn couldn’t even watch. Johnson’s putt missed low and really never had a chance.

I don’t think Hahn will be a one hit wonder. He’s been in this position before, but this time fate was on his side as he battled greats like Goosen, Sergio, Dustin Johnson, Jordan Spieth, and others. He was of course elated and humbled by his victory, and I’d imagine the birth of his daughter next month will be even more thrilling than what he experienced today.

After Sergio Garcia’s first 70 holes of the NTO, this was his tournament to lose. Sergio was in the middle of a packed leaderboard when he hit the Shot of the Day from next to the 12th green. This chip-in gave him a one shot lead.

Sergio takes the lead with a chip in at 12. pic.twitter.com/XkJjFmh4Cj

But because the NTO and Riviera were playing like a major, we knew he couldn’t hold on and win, right? Sergio’s swing was off all day, and he admitted this in his post round interview. His tee shots were right and at times even right of right. For instance, in the 3rd round his tee ball on 13 was 75 yards off line and ended up in the bunker next to the 10th green. Of course he went on to hit a great recovery shot and make par because it was still Saturday. Sergio’s down fall started with tee shots at 17 and 18 that were quick smother hooks. Both resulted in bogies and kept him one shot out of the playoff. 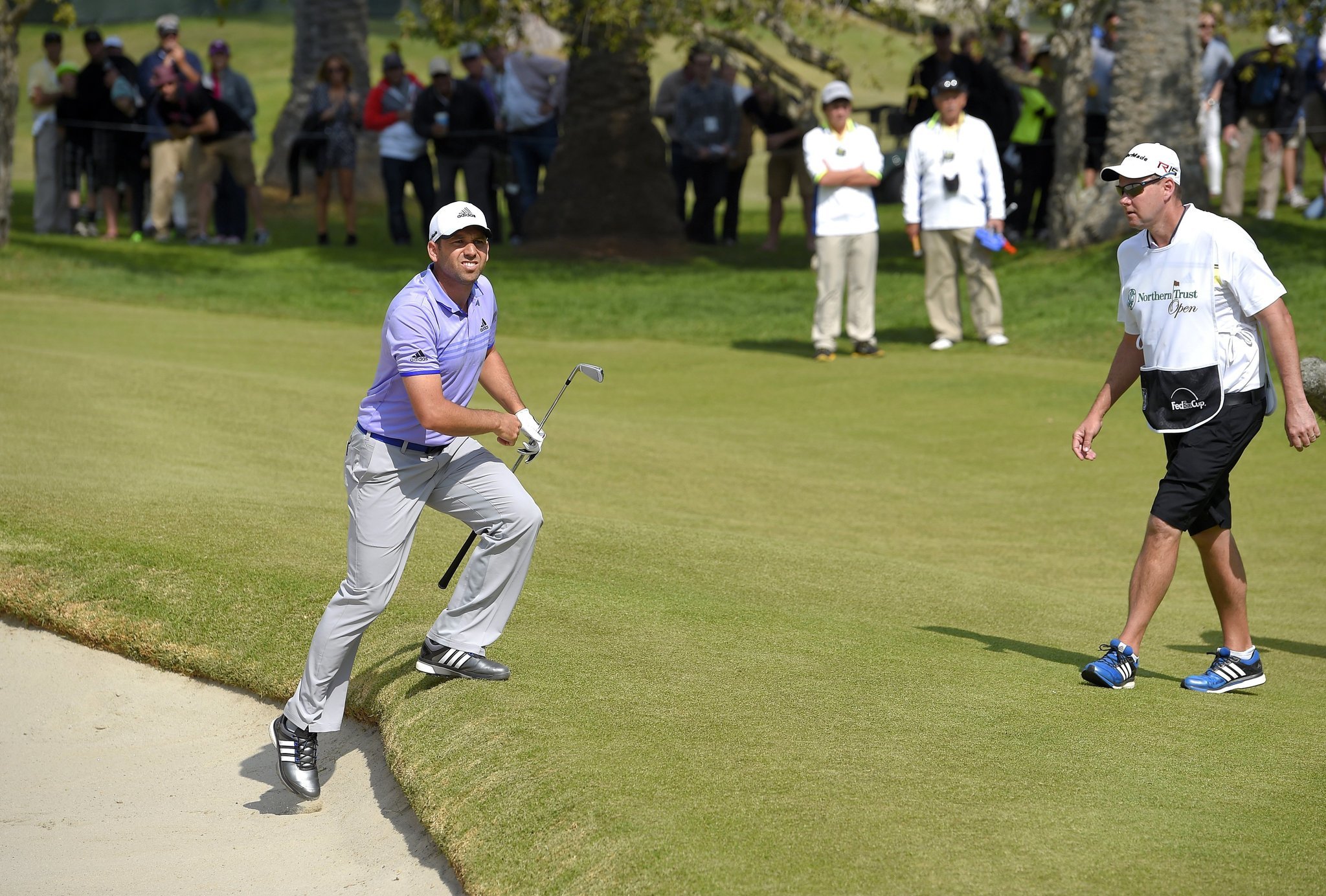 Then the little shit tells Pete Kostis that he didn’t deserve to win because he didn’t have his best stuff this week. What kind of fucking pussy-thinking is that? I’d bet Tiger Woods won 40 tournaments with his “C” game. Winners win, there are no pictures on the scorecard. Sergio is a mental midget.

Jordan Spieth was in the field and finished one shot out of the playoff too. You wouldn’t know it though because CBS didn’t show him for the first 2 hours and 30 minutes of their telecast. What. The. Fuck? I know there were 27+ players with a chance, but to whiff on the rise of a big star coming up the leaderboard on Sunday is inexcusable.

Well yes, that is Paulina Gretzky. She was at the Riv to see her baby daddy play just well enough to lose to James Hahn. Dustin played great this week and I’m thrilled that he’s back on the tour after his cocaine suspension. Besides Sergio, Dustin is the other guy that should be kicking himself tonight. He bogied the par five 17th hole with a wedge from the fairway on his third shot. He missed a 12 foot birdie putt at 18 that would have given him a 1 stroke clubhouse lead. Then he missed a 10 footer that would have extended the playoff with Hahn. In short, DJ still isn’t clutch, Paulina is still around, and his short game is still preventing him from being a top 3 player in the world (even though his flop shot and subsequent birdie on the 2nd playoff hole was ridiculous).

And lastly we had the old guys lingering around for 63 holes of this tournament. Through the front nine of the final round it looked like Retief or Vijay were going to go home with the big check. Goosen crumbled, shot 75, and never was a factor in the last 9 holes. Veej birdied the 10th hole to take the lead (on his 52nd birthday nonetheless), then shit himself. He was chipping cross-handed, which is bizarre enough, and played his last 4 holes 4 over to finish 4 back. Good. I can’t say this enough. Fuck Vijay.

Not The Shot Of They Day

Oh yes, this beauty from Paul Casey takes the cake today. The only thing in golf scarier for a player than hitting a shank is the shot immediately following an unplanned lateral stroke. Amazingly enough, he pitched his next shot on the green and made a par!

I saw Casey at a practice round for the 2006 PGA Championship at Medinah. He was playing the 242 yard par three 13th hole. He attempted to hit a 3 iron and shanked the fuck out of it much worse than what you see in the tweet above. Gary McCord was there to give him shit about it. Its too bad swing coach Peter Kostis didn’t chime in today to tell us what caused his pupil’s hosel rocket.

Ryan Moore takes home the SFG Shot of the Week from the Riv. Saturday at the 10th hole Moore hit driver and nearly made an ace. Then he got prison-fucked thanks to the ball gaining speed off the lip of the cup and going over the green.

Moore went from nearly making 1 to settling for a 4 in the blink of an eye. There’s no justice in golf. Later in the round at the par three 16th Moore’s tee shot hit the flag stick and bounded off the putting surface. It wasn’t all bad luck for Ryan, he did drain a 20 footer from the fringe to get a 2 on his next shot.

I haven’t included a ‘TV Time’ segment in my weekly wrap ups for quite sometime now. And that will continue unless there is something out of the norm to mention about a broadcast. I noted above how bad CBS was today in showing viewers Jordan’s Spieth’s play. The rest of their broadcast was pretty weak too, especially when their lame “Help Me Kostis” segment showed us more celebrity swing shit as we saw last week. And to give us the swing of octogenarian Clint Eastwood, no no no no no. That was a desperate Oscars tie-in attempt that failed miserably.

What was done right this week didn’t come from CBS at all, it came from the PGA Tour production crew. PGATour.com shows live coverage from an assigned hole or stretch of holes at the tour event each week. At the NTO they hunkered down at the devilish 10th hole. Brilliant! For all four rounds golf fans could watch the entire field play this quirky hole from the tee through the green. Yes please, can we have more? My hope is the tour saw this as a successful venture and we get more of it going forward. “Live At the Bear Trap” sounds pretty good to me for next week. Are you listening Mr. Finchem?!????

4 Responses to Hahn Gets 1st Win At The Riv: Final Thoughts On Northern Trust Open