Tour Graduates And Rick’s New ‘Do

Posted on September 21, 2014 by shutfacegolf

I Avoided Panic Attacks With Booze And Pills

There was no PGA Tour golf played this weekend. That thought is hard to fathom, but I muddled through it and you did too. After all, this IS football season! Golf that was played centered around players from the PGA, Web.com and Symetra (ladies) Tours procuring cards that allow them to have membership on the major tours for 2015. On the men’s side, Derek Fathauer won the Web.com finals with with a tidy final round 68 on the course at Sawgrass that isn’t the host of the Players Championship.

The finals for the Web.com Tour is a combination of players that didn’t make the Fed Ex Playoffs on the PGA Tour and other Web.com players that don’t have any status on the big boy tour. The top 50 get PGA Tour status for the upcoming season, but the pecking order differs greatly from number 1 to number 50. In other words, number 50 isn’t going to get into many events that he wants to play.

Of the lucky 50, you’ll recognize Jason Gore, he of 2005 Pinehurst fame, Heath Slocum (that’s what she said), Sam Saunders (Arnie’s grandson), Colt Knost, Jonathan Byrd, and Tommy “Two Gloves” Gainey. Tommy is joined by another fellow Big Break alum in Tony Finau. Now that their stressful weekend is over, they can probably all take a relaxing shit for the first time in 6 weeks. For the guys that didn’t make the top 50, they’ll have status on the Web.com Tour next year. They’ll be fine. It isn’t as if the queen has ordered them to be beheaded.

On the Symetra Tour things are a little bit different than what their counterparts on the men’s side get in terms of cash flow. You can make a damn nice living being in the middle of the pack on the Web.com Tour. For the ladies, if you’re not on the LPGA circuit making cuts, you’re spending more than you’re making. For instance, the 10th place chick on the Symetra money list this year made less than 42k, but at least now she’s earned her way to the big show for 2015. Who is said player? Why it is none other than another Big Break alum, Mallory Blackwelder.

Why do we care about the 10th place Symetra Tour player instead of the other 9 in front of her? Because she’s easy on the eyes and they’re not. The ladies game needs more of these types of players. They don’t grow on trees. Mallory earned her way to the tour fair and square. Now lets hope she stays there so we can see more of her. Speaking of which….here’s more of Ms. Blackwelder. 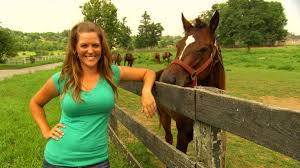 I think the horse is starring at her tits. How dare he?

Fuck yeah!!!!!! Does it every time, doesn’t it? I think Rickie Fowler agrees, and I can only assume he watched that video or something similar just before he hit the barber shop this weekend. Take a look:

How patriotic. How heroic. How……fucking stupid does that look? Hey, this is the guy that just gave you the Team America clip. Don’t question my patriotism. Question Rick’s style, as I often do. Good for him, and that’ll probably be right up the alley of his typical fan, but its fucking awful. And you’re not going to be able to see it under his hat anyway. But hey, that might be all it takes to let Sergio and Rory know that you mean business. They’ll shit themselves at the sight of it. Brilliant!