Posted on August 4, 2014 by shutfacegolf

There’s nothing like the Monday of a major championship week…..unless of course that Monday is the week of the PGA. The final major of the year doesn’t have much going for it right now. It is too close to the British, too close to the start of football season, and too close to the Fed Ex playoffs. Therefore, it doesn’t get the hype that Augusta does as it wakes us from a winter slumber. It doesn’t hold the prestige of a an Open Championship or U.S. Open. It is the red haired step child of the majors and it deserves to be treated like one. Still, I won’t neglect it. I’ll muddle through. And for fuck’s sake, all this year’s venue has ever done is produce two thrilling PGAs and a great Ryder Cup. Maybe I owe it a little more respect.

No news was good news for Tiger fans today at the PGA. He did cancel his presser that was scheduled for early Tuesday morning. What does that mean? Nothing yet. He doesn’t know if he’ll give it a go and risk re-injuring his crooked back. What else do we know? We know Rory made it from Akron to Louisville to check in and get his players badge. We know that Tim Rosaforte got the goods on Jordy’s 21st birthday (small gathering in Vegas, basketball suite at the Palms and 3 day hangover). And we also know the tee times and pairings the PGA of America came up with last week. Take a peak.

Tee Times: First and second round

I’ve bold faced all the groups that consist completely of past PGA champions. Other than those the PGA doesn’t get too creative with their pairings. The USGA and Masters make groups that are far more entertaining. There are two headliners. If Tiger plays, his pairing with Paddy and Phil will draw mucho eyeballs. The other champions-only group that draws my interest is the Dufner/Bradley group. I feel sorry for ‘Tiger killer’, Y.E. Yang, having to play with them and tolerate the grief they’ll be throwing at each other the whole way.

Like any other major, the PGA is another opportunity for apparel companies to script outfits for their stars. Unlike the other majors, we’re kind of sick of it by this point in the season. Still, they’re out there and they deserve comments and critiques. 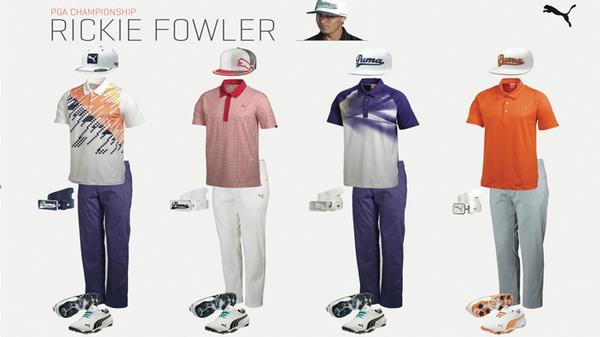 Standard stuff here for Dick. The 1st and 3rd round shirts look like they’re straight off an extra on an old Miami Vice set. Who’s buying all this Puma gear anyway? They’re obviously not targeting my demographic.

Rory’s Vegas odds to win the PGA this week decreased to 5 to 1 this morning. His odds of being the best dressed unfortunately went in the other direction when Nike released his scripted outfits. I like the shirts and slacks. The hats he’ll wear for the first 3 days confuse me. And is he really going to wear only one pair of shoes for the week?

If the Big Cat plays, at least he’ll look good. Of course, if he wears those shoes in the graphic any of the first 3 rounds he’ll ruin the whole ensemble. Strangely there’s no back brace pictured with a $woosh on it. That’s a missed opportunity, Mr. Knight.

Snoozer. I thought Oakley signing Bubba would be a big deal for them. Maybe its been all they could ask for. Afterall, the guy did win a green jacket this year. When I see Oakley’s shit on Watson I see the same thing over and over. Nothing sticks out and makes me notice it. Same things rings true this week.

Could be worse. No canary yellow Sunday outfit to make him look like a walking banana is a win before the week even begins. Sergio is obviously playing well and a PGA is exactly the type of major he could pick off this week, this year, etc. His time is now. Unfortunately for Garica, the PGA is at Valhalla……a course he has bad memories on and has already publicly stated he despises. Figures. Golf Gods 453, Sergio 3.

Of course there are plenty of other scripted outfits that are or will be set up for this week. If one of them jumps the shark, or puts out an octo print pant I’ll make sure you’re made aware of the situation.

Jason Dufner will defend his 2013 PGA Championship title with some new equipment in the bag this week, a putter. Duf had been using a newer model Scotty Cameron putter with an extended Super Stroke slim grip. Apparently he decided to part ways with it mid-round in Akron last weekend. After the 10th hole he walked off the green and handed it to a young fellow and told him to keep it. Nice. And what a fucking score for the kid. Duf putted with his 3 wood for the last 8 holes and carded a 77.

That’s just one more reminder of why we’re rooting for Duf to turn things around this week in Kentucky. I don’t expect it to happen. He’s played like shit all year save the Colonial. But we’ll always have the ass pat from Oak Hill last year.

After seeing that clip, its not a stretch to say Amanda has had a better year than Jason.

Mark Brooks Was Bob May Minus Tiger Woods

The Golf Channel has had no shame in replaying the 2000 PGA final round duel between Tiger Woods and Bob May for the last few weeks. It was a fantastic and epic tournament and its profile is raised considerably by the fact that TW won his 3rd major of the year. The 2000 PGA was so good that it has made everyone forget about the 1996 iteration that was also played at Valhalla. Mark Brooks beat Kenny Perry in a playoff. Tommy Toles, Vijay Singh, and Steve Elkington (1995 champ) missed the playoff by a shot or two. And golf fashion was something to behold. This gem of highlights from Youtube is worth those 6 minutes of productivity you’ll lose at work.

Wow. The background music, balatas, Hogan and Yonex sponsoring players, the Shark’s hat, and Pavin’s mustache. Golf was a strange but beautiful thing in the mid 1990s.