I say that because there was a time before Tim Clark won the 2010 Players Championship that he had the most 2nd place finishes in the history of the tour without a victory. Maybe I don’t have that exact, but it was some all-timer of a stat like that. Since that Players victory 4 years ago Timmy has battled injuries, surgeries, and more injuries….not to mention the governing bodies decision to ban anchored putters. Tim’s play has picked up of late with a top 20 at St. Jude and a T5 finish on the John Deere two weeks ago. Today the diminutive South African cashed in on his hard work when Jim Furyk gave him the opportunity to catch and pass him on the leaderboard at the Canadian Open at the Royal Montreal Golf Club.

Thanks to some truly shitty weather in the 48 hour forecast, the folks that run Canada’s most prestigious golf tourney moved up the Sunday tee times and CBS eventually showed the action on a delay at its normally scheduled time. If you missed it, you missed Clark’s back nine 30 that included one putts on the first 8 holes (10 putts total for the nine). He ran down Furyk by the 14th hole and the two dueled down to the 72nd green. On the final hole Clark was left with a tricky 6 footer for par. Furyk had a 17 foot birdie putt that could have tied Clark, or won the RBC if Clark had missed. Instead, Jimmy missed and Timmy made. Ball game.

As Peter Kostis pointed out immediately after the tournament was decided, the win today for Clark completely changes his schedule for the next two weeks. He’s now in the fields at the both WGC event at Firestone and the PGA Championship at Valhalla. In other words, he’s living the high life again.

As I’m sure you noticed above, Mrs. Clark is no slouch in the WAG department. Who knew? And she looks like that after popping out two kids. Good for her, and even better for Tim. The nanny didn’t look too bad either, but I didn’t want to go there. Plus I don’t have a tag for nannies……yet. I probably should because they’re becoming a bit of a thing on tour.

The photo above isn’t recent, but she doesn’t look that different here as the shot above above with the family.

And this one is from four years ago when Tim won the Players.

I have no fucking clue where/when this one is from, but I couldn’t not provide it for your viewing. We know she’s Canadian and the couple met when Tim was playing the Canadian tour in the late 90s right after he turned pro. And that’s really all the Google machine has on Candice Clark. Twitter tells us that she and Mrs. Luke Donald are besties while out on tour. That sounds completely annoying but I won’t hold it against her. With Tim’s win she’s also a prime candidate for the ShutFaceGolf.com WAG of the Month. We’ll have a new one on Friday in case you forgot.

I’m not going to come right out and say that big Jim choked this one away. A 3 shot lead through 54 holes is no sure thing. Furyk shot an under par round, but it wasn’t good enough to hold up against Clark’s scorching hot back nine. Jim not closing a 54 hole lead is quickly becoming the norm. I’d bet it was one of the first things anyone reading this thought when they saw Furyk leading the Canadian Open on Saturday evening.

He wins only about 35% on tournaments he’s lead through 3 days. Tiger closes at nearly a 90% clip for comparison. Phil and Ernie are about 70%. That says something about Jim’s mentality in final rounds. He hasn’t won since the Tour Championship of 2010. And I’m beginning to wonder if there isn’t some sort of Fed Ex Champion hex going around. Snedeker, Haas, Tiger, Vijay….there is a pattern.

The good news for Jim is he did hit the shots he needed to once Clark became a threat down the stretch. He hit darts on 17 and 18. He also had some pretty sporty up and downs to save pars. That part of today was vastly different from recent failures at Firestone and Olympic Club. I don’t think he’ll have a hard time getting back up from this defeat. He’s playing well and he’ll contend again and win sooner rather than later. In the meantime Jim has locked up a spot on the U.S. Ryder Cup team for this year. I’m still trying to figure out if that is a good thing or a bad thing.

Seeing Kyle Stanley’s name on the leaderboard this weekend was a bit of a shock. He’s fallen completely off the radar over the last 18 months and the Golf Channel made no bones about why this is the case. He putts like a toddler and the stats that back that opinion up are mind boggling. Hopefully he’s figured something out and we start seeing more of him.  GMac was on the scene in Montreal this week and snaked a top 10 out of his appearance. He’s making this a regular thing as he has played in the U.S. Open, French Open, Scottish Open, and British Open in his last 4 starts prior to the Canadian Open. His cold putter kept him from keeping up with Clark and Furyk for four rounds, but he did have the shot of the tournament on Thursday.

Ball striking machine Graham DeLaet’s 2nd round 63 had his home country thinking a Canadian was going to bring home their Open for the first time since dinosaurs walked the earth, but like McDowell his putter went cold and he finished well behind the leaders. For his efforts DeLaet did still capture the honor of Low Canadian. They actually do give out a trophy for such a thing.

If you’re a regular reader here you know I’ve stopped critiquing the weekly golf broadcasts and the networks that air them. I don’t think you want to read the same grumpy complaints week after week. This week Feherty was MIA because he was at memorial services for Sam Torrance. McCord and Faldo were gone too, at least I didn’t hear them, and I have no idea why. In their absence CBS added 2002 PGA Championship winner Rich Beem to the team. I didn’t hear enough from him to form an educated opinion, so I’ll rely on what you guys have to say.

Speak freely, was he any good or did he suck balls? And why not just wing it with Finchy and Kostis in the absence of their horses? To me this seems like they were giving Beemer an audition and want to make him part of the regular squad. I guess we’ll see.

I’ve already discussed Holly Sonder’s announcement that she’s left TGC for Fox to do NFL games and whatever golf they put on. Old news. What’s new is what she did this weekend and who Golf Channel tried to replace her with. First up they tried Cara Robinson. I’m not exactly sure who she is other than some sports chick from Europe. She doesn’t cut it. Think of this move as sending out the junior varsity squad after the varsity game. Who’s staying to watch less talent? While she’s fair on the eyes she lacks the sex appeal that Holly brought. I’m thinking Cara gets about a 2 week tryout and they move on to one of their Big Break chicks. Lauren Sullivan, Meghan Hardin, come on down! 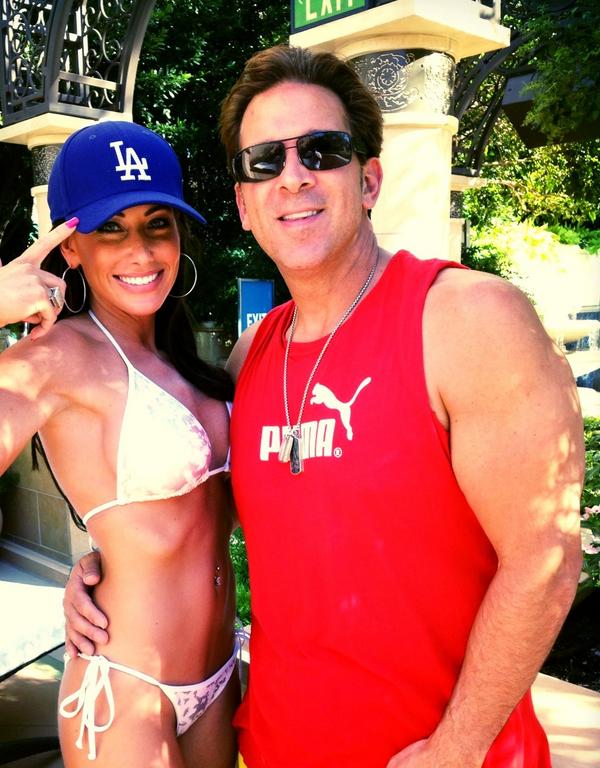 Then there’s that. How the fuck are you going to replace that? And why is she still ‘engaged’ to that former ESPN boner. Poor girl. Holly tweeted that she was in Vegas this weekend getting rested up for the NFL season on Fox. My only question is, when will the sex tape come out?