Tuesdays at a major typically mean anyone of any importance to the championship will be asked to sit down and answer questions for the golf media. Adam Scott, Rory McIlroy, Tiger, and several others did just that today at Royal Liverpool. Others will still be asked to do so tomorrow as well. What did we learn? Not a whole helluva lot. We know that like always, Tiger expects to win. Why show up otherwise? I’ve always liked that mentality for him and I think it is one of the most overlooked characteristics in his greatness. Too bad he has no chance to actually do so.

Tiger also gave us a look inside his life in what he was dealing with in regard to his back pain. He said the pain was so great that at times it impacted what he could do with his kids and that there were days he couldn’t get out of bed over the last 17 months. That sounds miserable. In comparison, when he had past knee injuries he was still in pain, but the pain didn’t hold back anything but his golf. That’s an interesting perspective and shows why he was in such a rush to have back surgery even though it would impact his golf schedule for 2014.

My prediction for TW this week is that he’ll barely make the cut. The course is 180 degrees different than what it was in 2006 when he dominated. That version of the Open was firm, fast, dry, and dusty. We all know how he hit irons off every tee and strangled the championship with his course management. A wet version of Hoylake will make him hit more drivers off the tee, and that’s going to be an issue for him.

Tee times and pairings for the Open Championship were released on Monday. I didn’t have the chance to look at them in more detail until today. Courtesy of the graphic I took from ESPN.com, here they are:

Notice the bolded/italicized groupings I’ve marked. The R&A like the USGA can have a sense of humor with these things. Leonard, Laurie, and Curtis in a grouping….that’s the one hit wonder group of the Open. Tom Watson finally gets to play with guys closer to his own age in Clarke and Furyk. Donald, Fowler, and Garcia could all contend, and they could all wear clothing so damn bright that we need sunglasses to see them. Tiger commented that he likes playing with Stenson. A comfortable pairing like that is a good thing for him, but Henrik should probably be giving him shots.

Ian Poulter is paired with Dustin Johnson and Jimmy Walker, he’ll likely be out driven by 70 yards on numerous occasions in the 1st two rounds. Spieth is paired with Rory again. That is a made for TV pairing, but I don’t expect either to seriously contend into the weekend. Believe it or not, the Faldo, Hamilton, Calcavecchia grouping is made up of former Open champs. Phil, Bubba, and Ernie are all together. That should be fun, but I already feel bad for Els’ caddie for having to remember that there are two lefties in the group. The Rose, Scott, and Dufner group is a tasty one. All 2013 major champs. There is no coincidence in that. Word from the Golf Channel today is that Jason Dufner is playing through some nasty inflammation in his shoulder this week.

Give It A Rest, Ian

Speaking of injured golfers, Ian Poulter tweaked his wrist last week hitting from the long grass at the Scottish Open. Yeah, sure. Either that or he whacks off too much thinking about Martin Kaymer’s pretty…….errrrr……swing. Whatever the case, Ian will also be playing through pain this week at the Open Championship.

Poults had an MRI on Monday to have his wrist checked out. A small benign tumor was found, but no serious damage. Ian will have the tumor drained via a syringe when he returns home after his mid-summer trip to Europe.

Somehow, someway, 1995 Champion Golfer of the Year, John Daly, is in the field again in 2014 at Hoylake. The big guy was out in all his glory (no, he didn’t show his cock) for his practice rounds on Monday and Tuesday. He even had his lady friend, Anna Cladakis, on the bag caddying for him. Why is this news? It isn’t. She’s been with John for a while now but this gives us a chance to show her and her huge tits.

She’s not stunning, but she’s way better looking than anyone JD should be with at this point in his life. Of course, if she’s with him she’s probably chocked full of crazy herself and its only a matter of time before golf’s favorite trailer trash couple ends up on the police blotter. Don’t all his relationships end that way?

As Long As We’re Talking WAGs

We might as well stay on topic. When Rickie Fowler made the 2010 Ryder Cup team that traveled to Wales his guest that week was Alexandra Browne who is the daughter of Champions Tour member Olin Browne. Golf journos covering the event reported that Browne and Fowler were dating at the time. You don’t see much about them being together these days. I can’t confirm via the interwebs either way.

Browne made a little bit if news this week by releasing an album. The cover is interesting and worth your time to view. See below:

Nice to see her becoming a woman. 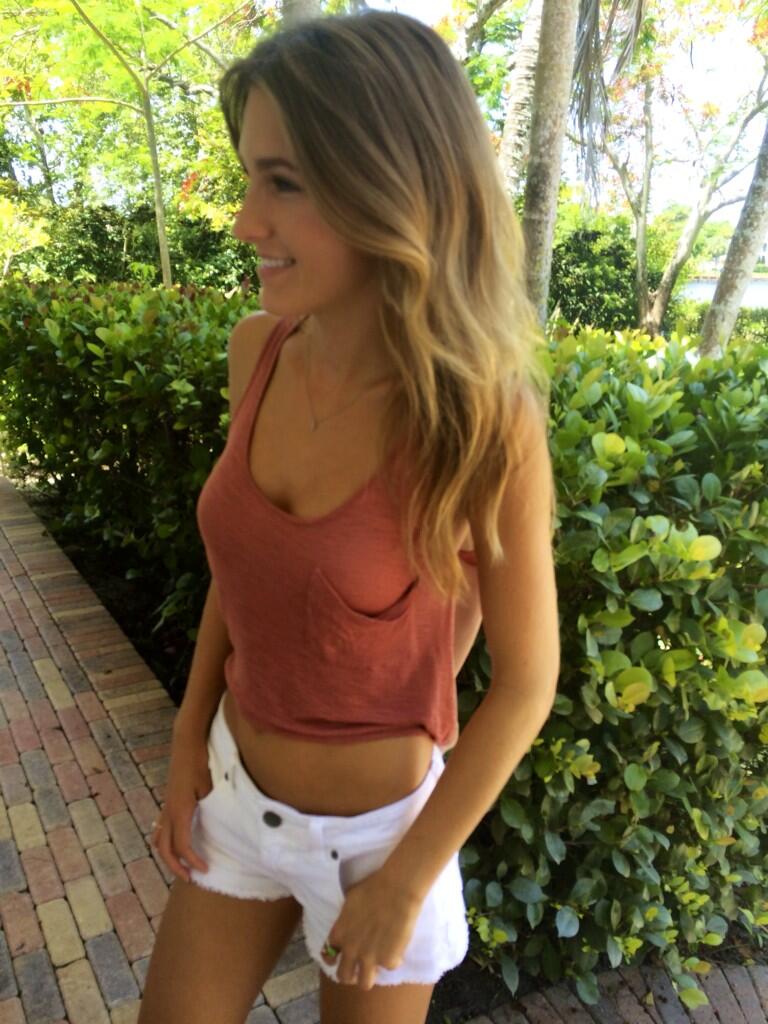 Can she actually sing? I hadn’t bothered to check until today. Then I found this video of one of her songs. She has a pretty good sound even though its not my style. If you’re into this sort of thing, the video is below.