Sergio Makes Amends & A New WAG Of The Month

Do you remember the first U.S. Open at Bethpage Black in 2002? The highlights were that Tiger won, Phil (again) took 2nd, and Jeff Sluman couldn’t reach the 10th fairway. The other story of that wet June week on Long Island 12 years ago was that the New York fans didn’t exactly fall in love with Sergio Garcia. Sergio was just a 22 year old at the time and as he often still does today, he easily let his emotions get the best of him. With thoughts of wet grips and extreme nervousness bouncing around in his head, Garcia developed a nasty habit of constantly re-gripping his club while he waggled and stood over each shot. His time over the ball grew with each shot and extended for what seemed like forever. The rowdy and over-served crowds at Bethpage relentlessly booed and heckled him causing his tension to grow and his twitchiness to escalate.

Garcia didn’t bite his tongue when asked about the fans of New York by golf jounos after the round. There was no love lost between he and the locals attending the 2002 U.S. Open as patrons. I don’t recall any issues involving the crowds and Sergio when the USGA’s Open returned to Bethpage in 2009. However, at the Barclay’s in recent years Garcia backed off a shot and was again chastised by restless New Yorkers.

And just this year the PGA of America announced that a future Ryder Cup would be contested on the Black Course. I can only imagine the greeting Mr. Garcia would be getting on that 1st tee and throughout the matches had he not been part of a recent Taylormade promotional event at the Empire State’s favorite muni. Taylormade Golf decided to have Sergio show up unannounced at the Black, hit balls, hang with the public, and give away drivers. The result was a pretty cool video and more goodwill for Sergio than he likely deserves.

I’ve dogged both Taylormade and Sergio at length on this site. I do it when it is deserved. Today after watching this video I’ll tip my hat and tell them both how great this was. The fact that people of my ilk are talking about a stupid promotional clip and making it go viral means TMG can already call this a tremendous success. As for how New Yorkers receive Sergio over the years at New York based tournaments… we’ll have to wait and see.

New WAG Of The Month

Ugh….June was a rough month in the WAG Department. I can’t find any proof that Hideki Matsuyama has a girlfriend. Mrs. Crane? No fucking way. Martin Kaymer? I don’t think you guys want to see a dude up there for 31 days of July. Mrs. Streelman? See Mrs. Crane. That leaves one true contender, Kate Rose, A.K.A., Mrs. Justin Rose. Will she wear the crown for June? Nope. Go back a post and look at her. She’s cute but not worthy of such an honor. No, that doesn’t mean you get to look at Kirsty Gallacher for another month. It means I’m going off the grid. Enter Gala Ortin. Gala is the girlfriend of European Tour player Pablo Larrazabal. We’ve discussed her before in case you missed it. 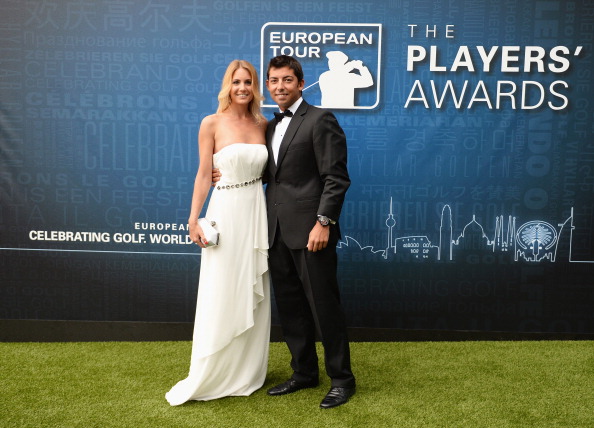 Why does she get the nod? Well, look at her, then look at the competition I noted above. Case closed. Plus, Pablo had two top tens in Europe this month and shot 63 in the second round of the BMW International Open last week. Good enough for me.

There she is, Gala Ortin, the ShutFaceGolf.com WAG of June 2014.