Kate Upton Should Stick To What She’s Good At

Apparently because Kate Upton is friends with Arnold Palmer and has been on the cover of Golf Digest she’s allowed to have an opinion of what the rules at private clubs should be. On Tuesday Upton heard a rumor that Los Angeles Country Club doesn’t allow women to play before noon. Then she tweeted the following and caused a stir because lots of people follow her on the Twitter thanks to her large tits.

I just heard that Los Angeles Country Club doesn't allow women to golf until noon.That is the most insulting news I've heard! It's 2014

The best part of her tweet? Not a single fucking word of it is true. And media outlets like Fox and even Golf.com ran with this as if it were gospel. At least Golf.com came back after some fact finding and provided a story with the correct information. It seems as though women have been members at LACC for over 100 years and can play whenever they want. Upton has yet to retract her statement or respond via Twitter to let her followers know she was wrong.

Perhaps she’s too busy thinking of things that offend her more, like the fact that a WNBA player makes 1% of the salary her male counterpart makes, or the that none of the 44 presidents in the history of our great country have been women…..you know, important shit like that which should really piss women off.

Oh well, at least we don’t have to hear her thoughts as we look at her. 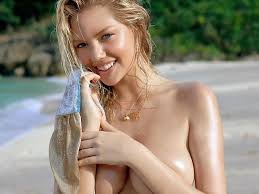 That’s more like it. Thanks Kate. Keep your mouth shut and your top off and all will be forgiven.