When you’re fresh off your first worldwide victory of the year and fresh out of a 3 year relationship to someone you planned to marry, golf must look pretty easy. At least it must be to Rory McIlroy who continued his hot streak from across the pond in to Central Ohio today in round one of the Memorial. Rory made the turn bogey free in 32 strokes and then birdied the 10th and eagled the par five 11th hole to reach 7 under. Another bird at 13 and he was starring John Huston’s course record of 61 in the face with 5 holes to play. One loose shot at the 14th cost him a double which he got back by making eagle at the par five 15th.

Playing alongside Adam Scott and Jason Day, Rors birdied the 16th for good measure and casually posted a 9 under 63 to lead the field by 3 shots. If you’re scoring at home, that’s 15 under in his last two rounds with 3 eagles and 13 birdies. He’s driving and putting well, so everyone else should just get the fuck out of the way.

The Golf Channel did catch him limping a bit after his 2nd shot at the 7th hole. Rory told Steve Sands that he ‘twerked’ it when it got stuck in the round on his swing. He also claimed to have walked it off and would ice it after visiting the physio trailer for some treatment. I think he’ll be fine. 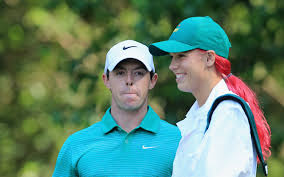 In other Rory news, word broke yesterday that when McIlroy did break up with former fiance Caroline Wozniacki he did so over the phone in less than 3 minutes.  Ouch. And Vegas isn’t stupid. His odds to win last week at Wentworth went lower when the break up went public. Subsequently, Caroline’s odds to win the French Open worsened. She eventually lost her first round match at the French Open earlier this week.

Keegs Has A Small One

The Golf Channel sleuths were up and at ’em early on Thursday trying to sneak a peak at what wand made its way in to Keegan Bradley’s bag. In recent money matches with Michael Jordan, Keegan has been spotted using a non anchored 41 inch putter that is similar to the belly putter made by Odyssey that he previously used in every PGA Tour event he’s ever played in. This includes the 2011 PGA Championship, which made him the first ever major winner using an anchored putter.

Keegs put the new blade in the bag first for the Wednesday pro-am at Memorial and at the convincing of his mother he stuck with it for round 1 on Thursday. Keegs putting stats improved noticeably in every measurable way and he went on to shoot 67. Hmmm……

Kudos the TGC for breaking the news and picking up the story. Smart move by Bradley to get ahead of the curve and make the move before the 2016 ban closed in. I’m guessing Adam Scott and Webb Simpson will do the same after the current Fed Ex season ends. For Bradley to make the move in mid season two weeks prior to a major seems odd and is questionable, but the results so far make the argument moot. I say keep an eye on it, these types of things usual have a honeymoon phase that ends quickly.

The rest of the field was almost as impressive as McIlroy, save Justin Rose who shot 73 because he’s my fantasy pick for the week. Paul Casey shot 27 for nine holes two weeks ago at the Nelson to get into contention then missed the cut at Colonial. Today he was back at it as the early leader shooting a 66 before Rory took over. Bubba Watson played his best round since Augusta and matched Casey’s 6 under round. Jordan Spieth and Adam Scott shot 69 without much effort. And Phil….well…..he was 5 under until the No Laying Up boys caught this little gem and tweeted it.

I highly recommend the audio on this one. Phil voices his displeasure in the hole and might have even dropped a ‘fuck’ for the home audience. That part is debatable. Even better, he hit the shot just as Jack Nicklaus walked into the TV booth to chat with Faldo and Terry Gannon. The two tattletales let Jack know what just happened and Nicklaus seemed to let out an evil cackle in approval of Phil’s water ball. Bitch Tits went on to make bogey then close with two doubles to turn his 5 under round in to even par.

I’m not sure there is a better iron player in professional golf at the present time than Jason Dufner. Duf’s full on assault of pins at Colonial last week was more than impressive and should have lead to a victory. He was back at it in Ohio today and even had the shot of the day with his wedge shot into the 11th green.

His expression almost changed, did you see it?

Rickie Shot 80 Last Week And Now We Have To See Him In A Speedo?

Ouch. That’s a rough week. Not as bad as Caroline Wozniacki’s, but damn close. No one should have to see a professional golfer in shorts, let alone a Golf Boy’s Video in a leather vest. Then today we find Rickie embarrassing himself again in a promotion he partook in for Red Bull (who of course sponsors him) in which he was filmed hanging out with a professional cliff diver as the two golfed a few holes and jumped off some rocks.

The comedy is blatantly obvious in the GIF above. If you want the full 4 minute clip that involves two guys calling each other beautiful while wearing banana hammocks and questioning if they like straight…..well…..hit this link.