Rors Wins At Wentworth Thanks To Epic Bjorn Collapse

I warned you earlier this week that Rory McIlroy was a dangerous golfer now thanks to his new found focus on his game having ended his relationship with Caroline Wozniacki. Throw in some decent golf, a few magical shots, and an absolute free fall from Thomas Bjorn and he has his first worldwide win of the calender year.

Rory didn’t lead the Euro Tour’s BMW PGA Championship at any point this week until he stood on the tee of the 72nd hole. By now you know he birdied it to increase his lead to two shots, shoot a final round 66, and wrap up the flagship event of the European Tour. Technically, the BMW is Rory’s 5th official Euro Tour victory, but it is his first that was actually played in Europe (that makes sense, right?). He hadn’t won on his home continent since he turned professional. The win also helps Rors leap from 11th in the world rankings to 6th.

While I warned you Rory would start winning again soon thanks to solely focusing on golf and ignoring all other distractions in life, I didn’t truly think it would happen this week at Wentworth. He’s never played the course well, so why start now? Truthfully, with 3 par fives he can reach on the closing nine it is a bit strange that he doesn’t contend at this championship with more consistently. My gut said that Rory had a win coming next week in Ohio. That place sets up too perfectly for him, but the Golf Channel told us today that he’s not even playing Jack’s tournament. Then Rory later told press in his post round interview that he is playing in Dublin, Ohio on Thursday. Whatever the case, getting a win this week might just be the beginning of a run. Wherever he plays next, he’ll be the favorite and we’ll be watching closely.

Trying to over come a 7 shot deficit by shooting 66 will give you a chance to win more often than not, but to win you need some help along the way. McIlroy got that help via the reckless play of Thomas Bjorn. TB sizzled in round one by setting the Wentworth West course record with a 62. He backed that up with fine play throughout the weekend until he found himself in a fairway bunker at the 6th hole in the final round. Leading by 6 shots over nearest challenger Shane Lowery, Bjorn’s 2nd shot at the par 4 hit the lip of the bunker and then nearly hit him. His triple bogey on the hole opened the door back up to the rest of the field to run him down and eventually pass him.

Bjorn fought back with birdies at 16 and 17 to give himself a chance at the final hole to force a playoff with McIlroy if he could make eagle. His collapse was tough to watch. His huge lead was seemingly gone in a minute of play and his mental approach flipped completely with the triple at the 6th hole. That’s a tough day no matter how seasoned of a veteran you are. For Thomas life only gets worse after blowing such a huge lead today…..he has to go home to this (scroll down).

Bjorn wasn’t alone in making triple at the 6th hole. Playing in the final group with him, Luke Donald also made 7 by hitting his tee shot in the trees and making a shit show of the short par 4 from there. Donald fought back with even more of a fury than Bjorn by holing long putts and chipping in for birdies he needed to keep up with Rory. In the end, Luke’s lack of accuracy off the tee with a new Mizuno driver he put in play this week was his undoing. It lead to his big number on the front nine and it cost him a chance at making eagle on the last to tie Rory. Same shit new day for Luke.

Besides a sloppy Masters a little over a month ago, Luke’s play has steadily improved over the last 3 months. While he didn’t win today, Luke did grab a boat load of Ryder Cup points that he needs desperately. He’s well out of the top spots that automatically qualify him for the European team with only 3 months left to earn points.

Did you watch much of the BMW Euro event this week? I watched plenty of it and I can’t say enough how much I enjoy the Euro broadcasts more than most done by CBS and NBC. I won’t bore you with all the reasons why, but if you saw Rory’s trophy ceremony and subsequent interview, you might already know. Two words, Kirsty Gallacher. Yes, her daddy is the former European Ryder Cup Captain and Wentworth head professional, Bernhard Gallacher. She’s a stunner.

If you get Sky Sports and watch their feed of Euro golf instead of what the Golf Channel puts on, you’re one lucky fucker. Kirsty is hot, anyone can see that. Her accent makes her fun to listen to and that’s the cherry on top. Oh, and she was an underwear model before she popped out a kid. 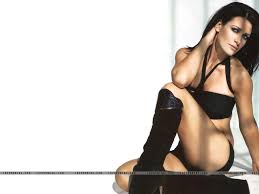 So why the fuck aren’t CBS and NBC following the lead taken by Sky? The Golf Channel has Holly Sonders, but won’t put her on an actual live golf broadcast. Can’t they find their own version of Ms. Gallacher. Some former major champion has to have a hot daughter that wants to be on TV. Give the people what they want! I love Feherty and Kostis is fine, but I’d rather see some T&A instead of another shot of Feherty’s long nose hairs and sweaty brow while a champion is interviewed on Sunday.

Wait, what’s that? You want more Kirsty? Ok….two for the road.