Another Dawg Has His Day: Final Thoughts On Nelson

With all the other talented players and big names in the field this week in Dallas I’m guessing no one picked Brendon Todd as the winner of the 2014 Nelson. Todd began the day playing in the final group with past major champion Louis (Larry) Oosthuizen. I expected him to fade into the background of the afternoon as a player like Leishman or Woodland made a charge in an attempt to over take Louis. That’s usually how these things go down and that’s probably what most everybody expected to happen. But not Todd and not in the season that is 2014. The guy didn’t blink. And in the end his steady, albeit awkward, ball striking and putting were enough to give him a two shot victory over My Queer…….errrrr……..excuse me, Mike Weir.

Weir and Leishman got hot early and were tied for the lead when CBS came on the air. I forgot Todd was even on the leaderboard until he birdied the 9th hole and turned to the back nine 3 under par for the round. He also birdied the 10th hole and closed with 8 consecutive pars coming home. Some were more spectacular and key than others. BT likely sealed his victory with his play on the two inward par 3s.

At the 13th hole his wayward tee shot nestled up to a tree and his only chance to advance the ball was to play a left handed shot. He did so with what appeared to be the back of his 5 iron and advanced the ball to about 8 feet away from the cup. Easy par. At 17 Todd again missed the green but this time was less than stellar with his chip leaving himself about 18 feet for par and a two shot lead with one hole to play. He drilled the long par putt and for all intents and purposes the tournament ended there. Big onions on that kid with that stroke.

CBS was sure to let viewers know what an up and down career Brendon has had to date. Winning 1.2 million dollars and snatching your first PGA Tour victory is life changing and should make you forget all about your Nationwide Tour struggles of the past. Todd being a Georgia boy makes the virginal victory even more special because he’ll of course be playing at the Masters next spring. It’s also another big win for the University of Georgia because Todd is the 6th UGA Bulldog to win on tour for the 2013/2014 PGA Tour season. Hunker down!

Most weeks on tour only feature one guy getting a trophy with that guy being labeled as the winner. Most weeks I 1000% agree with this notion, but not this one. When a guy like Mike Weir hasn’t top 10’d in 4 years and hasn’t won since 2007 you begin to wonder if he’ll go the way of David Duval and never find his game again. Weir needed to have a good showing sometime soon simply to make sure he has a card locked up for next season and the 700k he took home today should do that for him. For Weir to shoot four rounds of 68 or better and take 2nd place alone at the Nelson makes him a winner to for this week and this week alone. Welcome back Mr. Canada.

The rest of the field failed miserable to make any kind of back nine run at Brendon Todd on Sunday so I could stand here and throw feces at several guys for dogging it. I could…..but I won’t. Instead I’ll just throw one guy under the bus and that lucky fucker is Gary Woodland. Home slice didn’t birdie the short par five 7th hole one god damn time all week. Not once!!!! Over the weekend he hit 320 yard drives in the fairway both days and played it 3 over!!!!!! If he simply hits what was likely a 7 iron (for him) to the middle of the green and two putts both days he’s only one shot behind Todd and things are a little different. What the fuck? That’s just awful, and it’s simply inexcusable when you’re my fantasy pick for the week. Thanks for nothing, dick.

Reigning U.S. Junior Amateur champion is often compared to Jordan Speith because, well…. both won the U.S. Jr., committed to Texas, are from the Long Star State, and are pretty fucking good. Like Jordy as a school boy, Mr. Scheffler also received a sponsor invite to play in the HP Byron Nelson before he goes off to college.

Scottie had himself a pretty good week. He had his sister on the bag, made the cut, aced the 2nd hole on Saturday, and finished -4 and tied for 22nd place. That’s two shots better than his role model Jordan Spieth. Yes, a high school kid just beat the phenom who nearly won the Masters and the Players in the last 6 weeks. Golf is awesome that way, isn’t it?

You all saw Todd’s better half during the CBS broadcast, I know you did. You couldn’t miss her because they kept showing her. What do we know about her? Not much. Her name is Rachel and she had a hard nip at one point after he made his long par putt on 17 (yes, that’s the kind of hard hitting shit I bring you on SFG).

There’s not a lot of good pics of her on the interwebs either.

That’s her with Brendon and Morgan Freeman at the 2012 Bob Hope. We needed to see her without sunglasses, right? 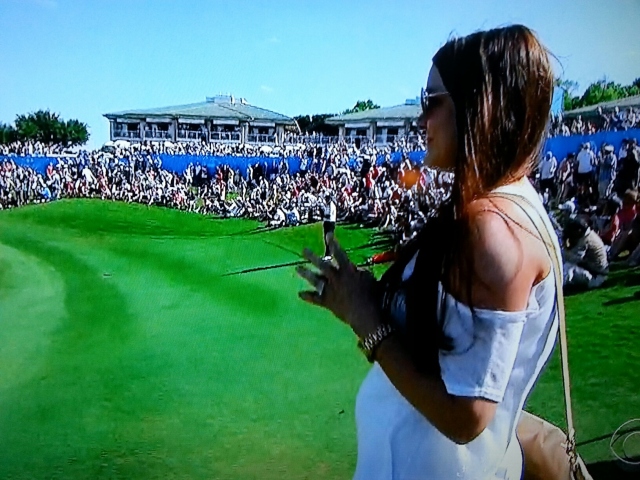 She has to be pregnant. I’m really not sure, but that looks like a baby bump and I also saw some swelled calves on her as she walked off screen. Those are usually signs that a bun is in the oven. To get a better look at her you can also watch the clip below that is someone’s idea of putting the weekly winner through hell after they get their trophy. Advance to the 1:40 mark for another look at the Mrs.

Since there’s a chance of her being prego, I’m not going to judge her looks. Even I’m not that harsh. I’ll simply give her an ‘incomplete’.

There’s two nominees this week and there could have been three because the left hand chip of Todd’s that I described above was pretty fucking good too. The first clip is Paddy Harrington’s second shot at the 11th hole. As you can see or saw, the thing was down in the cup and popped out. Robbery.

The next nominee is from Chucky Three Sticks, A.K.A Charles Howell III. Chuck was in the mix in Dallas all weekend and vaulted himself into contention with this eagle at the 16th hole. His subsequent bird at 17 had him in position to post a score in the clubhouse, but in true CH3 style, Chuck three whacked the 18th to post a much less threatening score.

I’ll give the nod to Charles’ shot even though he finished so meekly. The shot did actually go in unlike Paddy’s. That’s enough for me.

Ugh CBS. They mailed it in completely this week. Jimmy “No Pants” Nantz didn’t even show up in Texas. Apparently it was his birthday and he had better things to do. That typically means that Bill McAtee jumps in to suck off Faldo……errrrr……replace Jim for the weekend. On Saturday that wasn’t the case. Bill was M.I.A as well and Feherty was dragged off the course the hold Sir Nick’s hand in the tower. Awkward doesn’t begin to described it. The train wreck was fun to watch but hard to listen to.

Faldo did nothing but blabber both days speaking nonsensical fragments of sentences. McCord stayed home due to illness. And Kostis, god bless him for being healthy again and well from surviving cancer, but Pete had a handful of Sunday gaffes in which he forgot what number of stroke a player was hitting as he described it for the viewer. Missing yardages, limited hole graphics, no ProTracer…..just a shitty week from CBS. They treated the Nelson like the step child it is. Shame on them.