Taking a 3 shot lead with 4 holes to play into a 90 minute rain delay obviously doesn’t do much for ones mental game. Through 14 holes Martin Kaymer separated himself from 54 hole co-leader Jordan Spieth and his other challengers. He was in total control of his game having barely missed a shot all day. Spieth was faltering just like he did at Augusta, which meant Kaymer’s only true threat was Jim Furyk standing over a birdie putt on the 18th green. Jim missed and left himself a 3 foot par putt that he would have to wait to strike thanks to the horns blowing to signify that the championship was now under a weather delay.

Much of the way Kaymer plays is reminiscent of a robot. He doesn’t show much emotion while he plays and therefore I didn’t think the delay would impact him at all. I figured it would cause Furyk to yip his short putt and the resulting 4 shot lead for Kaymer would send me to the dinner table. Instead almost the opposite happened. Furyk knocked his putt in to post 12 under while Kaymer left his game in the clubhouse during the storm. Martin immediately double bogied the 15th hole and looked skittish on 16 in making his par. That sudden change in his game couldn’t have felt good standing on the 17th tee.

That’s when things got weird. Kaymer’s tee shot at the island green was fine, but with the line he took it bounced next to the bunker and then onto the green. I figured he’d have about 40 feet for his birdie attempt. Instead of bouncing forward on the next bounce Kaymer’s ball zipped back due to the spin from his wedge and came down the slope of the green like a runaway El train at O’Hare. You all saw it. Somehow it stopped and and Martin’s heart could beat again. A poor chip left him 28 feet for par and a bogey or worse appeared inevitable.

Boom. Incredible. And the shot of the week for sure. I think you could give Kaymer 20 more chances at that putt and he wouldn’t make it. He did reveal to the Golf Channel guys that he practiced from near that area earlier in the week because he thought his tee shot could land around the same spot on Sunday (noting “who would shoot to that pin?”). Kaymer’s solid tee ball on 18 and clutch 3 footer for par earned him a 1 shot victory over Furyk. He lead all week and played incredible golf for 68 holes. Then he played some gutsy golf on the last 3 holes. It was a wild ride.

Kaymer’s career has obviously been a bit of a roller coaster for the last few years. After winning the PGA Championship in 2010 he ascended to number 1 in the world. Since then, he’s done jack besides make the winning putt at the 2012 Ryder Cup. The Ryder Cup moment was purely happenstance. Right place, right time. Remember, the Euros hid Kaymer in their line ups that week and he only played twice. They knew his game was dog shit at the time. 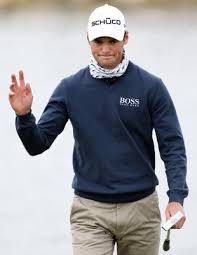 Kaymer played well in his last few starts, so his Players win isn’t a total surprise. He’s obviously a world class player who just needed a mental adjustment to find his winning form. That came while working with his coach before the Masters. Winning the Players puts Kaymer into a unique club of modern championship golfers. He’s one of four players to have won a Players, a major, and a World Golf Championship. The rest of that club includes Adam Scott, Tiger Woods, and Phil Mickelson. The win is also significant for European golf as it is the first tourney won this year on tour by someone other than an Aussie or American.

The Elephant In The Room

Type “is Martin Kaymer” into Google and the 2nd or 3rd auto-fill text option that appears is “a homosexual” or some variation of that question. Today, for the first time in the history of this site, more views from search engines were tallied from people asking that question instead of searching for naked pictures of Holly Sonders. I discussed this topic some time ago when I found out Martin dated a former Big Break cast member. Up until then I had just assumed that Martin was gay. As it turns out, Martin and his girlfriend broke up. While there is no public record for the split, she did insinuate to me that Martin was gay on Twitter. That’s a fact. Strangely it appears she deleted her Twitter account just this week.

I don’t care what Martin Kaymer’s sexual orientation is, but I feel as though the question is going to get raised sooner or later. The statistics on this site tell me so. On the day after Michael Sam is drafted as the first openly gay NFL player, Kaymer coincidentally wins the Players. That also means nothing, but can you imagine an openly gay golfer on tour?

The PGA Tour is a very conservative organization by nature. A player of Martin’s caliber coming out would rock it to its foundation. I’m not confirming that Martin is gay. Don’t read this wrong, but there is some evidence that supports it (besides the scarf thing he wore shown above). Martin seems very private by nature and therefore I’d guess he’s not going to hold a presser anytime soon to call attention to himself. His interviews with NBC about his mother’s passing and what she meant to him were very telling and some of the most private things he’s ever shared publicly. Whatever Martin is, who gives a shit? He’s a hell of a player, a fine champion, a gentleman that is well liked by his fellow Euros and the fans, and nothing else matters.

Kaymer, Jordan Spieth, and Jim Furyk were really the only players over the last 6 holes that had any chance to win the Players. Spieth’s final round was strangely similar to what happened in Augusta about a month ago. He had a solo lead at some point on the front nine in both championships and faded down the stretch as a player with a major already in their back pocket stepped up and won with solid play.

Over the next 48 hours several writers will tell a fable about how Spieth needs to win, or he can’t close…..blah fucking blah. He’s 20 years old and nearly won two big time tournaments that he has never played in before. Tell anyone writing that to fuck off. Jordan’s only problem is that he knows exactly where he stands once he makes the turn to the home stretch. He’s admitted as much and did so again today in his post round presser. Somehow, someway, he’ll get past that. The jittery kid that shows up late on Sundays will be gone and a fierce closer will emerge, but it won’t happen overnight. Spieth has already moved on from the disappointment of today as he was talking about what the next two Texas events mean to him since he’ll be playing in his home state.

Don’t cry for Jim Furyk. Mother fucker golfed his ball today to shoot 66 and nearly steal the 5th major from Kaymer. In doing so he cashed a second place check for 1 million dollars. Read that again. For the 2nd straight week big Jim watched the leader in the final group gut out the last hole to nip him by a shot. Boo hoo. Jim hasn’t won in what feels like eons. That’s going to change soon. He’s choked away some leads late, but the way he’s playing now he’s eventually going to post a number that stands up. What he needs to change is this constant tinkering/tweaking of the ball alignment when he’s hitting short putts. That shit is maddening and I can’t believe he can actually make those clutch putts when he’s so mind fucked on which way the line on his ball is pointing.

When the week began I figured Kevin Na would contend at Sawgrass. He’d played well in recent weeks and the Stadium course seems to fit his psychotic brain. Instead he merely showed up, made the cut, and collected a check. But he was also up to his old tricks . As many of you know, Na will often pull up on a shot when he doesn’t feel right in the middle of the swing. It looks like a complete whiff.

It’s amazing that he can do that. It looks ridiculous, but because he didn’t intend to hit the shot it doesn’t count as a stroke. Just another reason why Na is a fascinating train wreck to watch, if you have the time to deal with his slow pace.

Another big tourney, another back door top ten from Rory McIlroy. He did it at Augusta, he did it at Quail Hollow, and he’s done it again at the Players Championship this week. What the back door top ten means (and this is exactly what Rory has said as well), is that he plays poorly and barely makes the cut. Then he has just enough flashes of brilliance on the weekend to sneak up into the top ten by the end of a 72 hole event. He never really contends, but his result looks like he’s playing well.

As discussed by Johnny Miller during the NBC telecast today, Rory knows he’s close but one bad round per week throws the whole championship out of whack. This week it wasn’t necessarily one bad round, but several bad front nines. For the entire Players, Rory was 17 under par on the back nine and 8 over on the front including a 42 in round 2. He has to be kicking himself for letting things get away from him on that side of the scorecard.

Finishing round 3 Justin Rose came to the 18th green facing an easy chip from behind the green to finish -7 and in a pretty nice spot to contend for a victory on Sunday. When he addressed the ball he thought it moved. Playing partner Sergio Garcia convinced Rose that the ball simply oscillated and therefore no penalty should be assessed. Funny how quickly Sergio stuck up for/defended his fellow Euro.

The tour felt a bit differently about the situation. They called Rose in for more looks at the incident on their monitors and eventually assessed him with 2 strokes for the ball moving and him causing it to do so. Case closed, right? Apparently not. Sometime around mid morning on Sunday the tour again discussed the situation and decided that revised rule 18-4 should be used to make a decision, which is basically, if you have to use HD video equipment to see if the ball moved it must not have moved. In an unprecedented ruling change, the tour gave Rose his strokes back and he again stood at 7 under.

Sunday’s tee times were made in the midst of this fiasco and Rose was therefore paired with the other players at -5, some 2 hours ahead of Kaymer and Spieth in the final group. Justin’s 33 on the front had him to 10 under and a decent back 9 away from posting a low number in the clubhouse. However, his round came undone with bogies at 10, 11, and 12 and all the ‘what if’ talk surrounding his ruling went silent.

Not So Shot Of The Day

It would be easy to just give this one to Kevin Na, but he didn’t actually strike the ball. It wasn’t a shot, so he’s out. Instead we have the case of Richard Lee. Lee found dry land on the 17th hole and still made a double bogey 5. Sounds impossible, but it happened. Video proof exists.

A 25 handicapper would have done better. Lee’s never going to live that down. This little occurrence will be played on blooper shows for 50 years.