As exciting as a weekend at the Masters is, I know we’re all a little sad that the best week of golf is nearly over. At the same time, now that we’ve sifted out the shit and the cut has been made, we’re really just getting started. Take a look at the leaderboard to get an idea of where things stand. 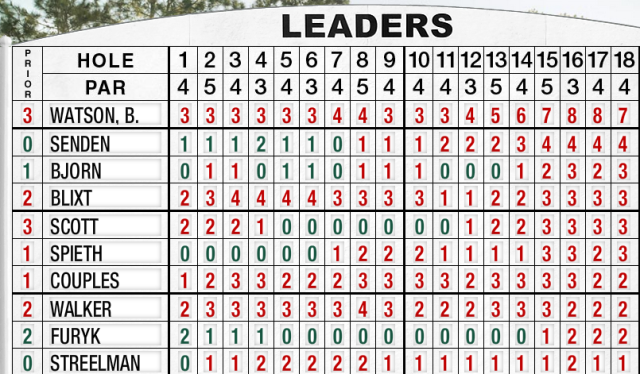 Bubba Watson was phenomenal today. I didn’t think he could back up his opening 69 with a lower score, but he did…..and did so in style. Bubs birdied holes 12 through 16 to light the back nine on fire. Through 36 holes he’s only made two bogies and is 2nd in the field in greens in regulation. Bubba told the media after his round that hitting greens is his secret to success at ANGC. Captain fucking obvious.

With a 3 shot lead some #twitternerds are already giving Watson a 2nd green jacket. Don’t kid yourself. He can be a mental midget and this is the Masters. Anything can happen. Just ask Bill Haas. I told you yesterday that I expected Haas to be over par in round 2. He didn’t let me down. I expected a 74 or 75, not 78. To hit 10 more shots than he did in round 1 makes me think he didn’t sleep too well on Thursday night with the lead.

John Senden on the other hand started out with a few bogies after a 72 in round 1, then made 6 birdies on the way back to the barn to jump all the way up to 2nd place and earn a spot in the final pairing for Saturday. Sendo is only a month removed from winning on tour in Tampa. He seems like a complete long shot to be the guy getting fitted for a green jacket on Sunday. How he holds up playing with Bubba in round 3 will tell us plenty. We know John hits it great, but how will he putt under the pressure of the weekend?

To no one’s surprise the silver fox that is Fred Couples is lingering around the top 5 heading in to the weekend. We’ve seen this script too many times. Fred comes to Augusta, finds fountain of youth, fades on the weekend. If you’re a big Fred fan, be prepared for golf blue balls by tomorrow around dinner time. I’m not trying to be a Fred hater. I’d like nothing more than a win from him just so I can see more of girlfriend Nadine Moze. She’s a sexy tart.

As for everyone else that made the cut, I think you can count out any player over par at this point, those guys at EVEN or better are in it, but they need to go low tomorrow. I’m talking to you Kuchar, Spieth, Walker, Westwood, and Snedeker.

No one expected Phil Mickelson to miss the cut this week in Augusta. After all, he hasn’t missed one since Tiger’s throttling of the golf course in 1997. Which makes me wonder, is Tiger missing from the field the juice that Phil didn’t have for the week? It very well could be. Phil has said on more than one occasion that beating Tiger is a motivating factor for him.

He even told the golf journos earlier this week that he misses Tiger not being at the Masters and said it didn’t feel the same without him. Maybe these two are like an old married couple that when one of them dies, the other dies of loneliness or a broken heart only a few days or months later. Sounds kinda gay, but I think there’s something to it, at least in FIGJAM’s mind.

Patrick Reed missing the cut is shocking only to him and maybe some pundits that were not paying attention. Reed had never hit a ball in a major until yesterday. He’s a very aggressive player by nature. Put those two things together and a missed cut seemed likely. On his way out the door Reed let his play and the golf course get to him. He said some colorful F-bombs and even threw a little tantrum. I love shit like that. @NoLayingUp (who is worth a follow on Twitter if you’re not already doing so) had the following tweet with the vine of Reed’s sailor speak.

Probably the most surprising turn of events on Friday were those of Aussie Marc Leishman. Leishman shot a smooth 70 in round one, then went out and birdied the first 3 holes on Friday to vault to the top of the leaderboard. I was feeling pretty good about my call yesterday that he’d not only contend into the weekend, but he’d likely win. He was 5 under through 21 holes. then played his last 15 in 10 over par to miss the cut. That’s a complete dumpster fire of a round. There’s no other way to explain it other than Leish must have looked up at the leaderboard, saw his name at the top and thought, “I’m fucking March Leishman, I can’t win the Masters.” See ya!

Did it seem to anyone else like every time ESPN showed Rory today he was in the tree trying to figure out how to hit his next shot? That’s usually a bad sign if you haven’t been paying attention to much of the round other than those shots. Maybe he was trying to hide from his girlfriend and her Easter Egg hair, I dunno. McIlroy’s round was complete garbage. First off, how the fuck does a guy with his ability make a 6 on any par 5 at Augusta National, let alone two of them?

Then on the 4th hole Rory made an even more head scratching decision. Earlier in the week he had the Nike tech nerds tweak his 4 iron by a degree or two so he could carry the bunker on the par three 4th hole without altering his swing. So what does he do on Friday? He leaves the 4 pack in the bag and tries to cut a 5 wood softly on to the green.

Yes, the wind probably made him think he needed more stick, but the 5 wood shot ended up so long that it bound behind Adam Scott getting ready to play his tee shot on the 5th hole. He must have been close to 35 yards long and ended up having to re-tee after taking an unplayable due to his ball being so close to the fence line marking the boundary of the golf course. Then on the 13th hole he hits a perfect drive only hit a sprinkler head on his approach to the green and ends up in the azaleas. Clearly it wasn’t his day.

Do you see Rory’s face in the cinnamon roll above? How can you not? Well some dope also saw it earlier in the week and decided it was a sign that he should make a large wager on Rory to win the Masters. I’m guessing that schmuck wishes he had started his day with a bagel now thanks to Rory’s 2nd round 77.

1 Response to Masters Week: Round 2