That Is How You Grow The Game

When Golf Digest’s controversial cover was released this week featuring Paulina Gretzky, the magazine and those associated with it defended the cover choice as a way to grow the game. We were told that putting a non-golfing sex symbol on the cover might make someone only casually interested in the game pick up the magazine and perk their interest. Bullshit, the only thing that got perked was some frat boy’s dick. If you really have an interest in growing the game, do more things like the USGA and Augusta National did over the last 12 months.

About a year ago during the Masters the USGA and ANGC announced the creation of the national Drive, Chip, and Putt competition. The big deal in the announcement was that the finals would be held the Sunday before the Masters at Augusta National. It sounded cool at the time, but it was hard to grasp until we all saw it come to fruition this morning on the Golf Channel.

If you missed it, I can’t say enough good things about what TGC aired from 8 to noon today. They showed girls and boys from different age groups on the greens, on the range, and in the short game areas competing to win their individual age groups. Rich Lerner, Peter Jacobson, Kay Cockerill, and Curt Byrum were on the call and they nailed it. Kids were interviewed, had features done on them, great replay and graphics were used, they even had bios of the kids…..it was exceptional television for any golf nut. 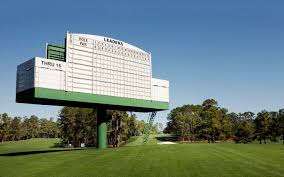 I figured when they made the announcement they’d simply trot out a few kids and let them whack some balls and call it good. Instead, these kids got to perform the putting part of the championship on the 18th green. Kids would hit 3 putts from lengths of 6 feet, 15 feet, and 40 feet. The 15 footer hit from right about where you’ve seen Schwartzel, O’Meara, and others hole putts to win green jackets. The winners names were displayed on the giant scoreboard shown above that is just off the 18th green in between the 10th and 18th holes. Pictures of the winners in green jackets were taken during award ceremonies. And to top it all off, former Masters champs like Adam Scott, Fred Couples, and Bubba Watson were on hand just to check things out. They had no obligation to be there, but after watching early portions of the event on TV, all three players made their way to the grounds to take part and meet the kids.

By the way, these kids are damn good. Several of the ladies are 2 handicaps or better and have committed to play college golf before they even enter high school. Most of the boys featured were scratch or have a plus index. Almost all of them putt without an ounce of fear, which makes an old three-jacker like me envious. There’s not doubt we’ll see a handful of these young champions again at Augusta in the years to come, however they’ll be playing for a little more than a 6 inch tall trophy.

As the competition aired on TGC several plugs were provided for the 2015 version of Drive, Chip, & Putt as registration for next year is now open and underway. Something tells me after this morning’s telecast the USGA will have a huge increase in applicants. Eat your heart out Golf Digest.