It kind of feels that way, doesn’t it? You can’t stop Taylormade Golf from working its ads and promotions into your life if you’re a golfer. Like a horror movie featuring zombies taking over the world and eating human brains, TMG won’t stop until every golfer walking the earth is playing their sticks. The effort they’re putting out, especially with their marketing campaigns, is quite impressive. If you think I’m writing about them again to express my discontent with the whole deal, think again. I’m truly impressed, I just don’t believe the Loft Up bullshit. 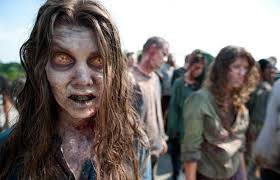 Earlier this week the TM zombies took over Time Square in New York City. Taylormade built a makeshift driving range that allowed passers-by to demo Speedblade 6 irons, which is the new/hot iron that TM Golf is pumping. The images and feed back were amazing and the event has been recognized as a tremendous success.

But Time Square and the Crossroads of the World weren’t enough for the zombie. They set up shop in London, San Francisco, and Toronto with similar hitting areas and called the global event the “Speed Pocket World Challenge”. Golfers measured their distance increase from their current 6 iron to the Speed Blade counterpart. I’m sure it cost millions to pull this off and I’m also sure that whatever they paid to execute the event was a bargain. Publicity like this has almost no price tag. Whomever thought this up, I stand and applaud you.

If you don’t live in any of these four major cities, the zombies at Taylormade might get your brain yet. In February they offered golfers a chance to sign up to receive a demo 6 iron in the mail. Yeah, I was curious so I did so, but I’m still waiting for mine.

Return Of The Speed Police

By now you all know exactly who the Speed Police are and what Taylormade is doing with them. The four marionettes of Justin Rose, Dustin Johnson, Jason Day and Sergio Garcia are becoming the breakout stars of golf commercials in 2014. The second adventure of the golf Pinocchios began to hit the airwaves this week and it didn’t disappoint.

Between Jason Day’s shorts, Sergio breaking the taillight, and the fact that there is no effort whatsoever to hide the puppet strings…..I just can’t help but chuckle when I see it. I also can’t wait to see what they’ll bring us next.

3 Responses to Taylormade Golf Is Relentless