Golf’s most famous Frenchman, Victor Dubuisson, was last seen with his ass in a cactus two weeks ago outside of Tucson when he finished 2nd to Jason Day in the WGC Accenture Match Play Championship. VD’s showing in the desert earned him enough FedEx Cup points to earn a special temporary membership for the remainder of the current PGA Tour season. The tour announced his defection to this side of the pond via a press release on Wednesday. Can you blame him? France sucks.

By becoming a temporary member, Dubuisson can now accept as many sponsor exemptions as tournament directors can throw at him. Every penny he earns will count toward the money list and he’s already earned enough cash from Accenture to grab a tour card for next year. Does this all sound familiar to you? It should. Victor’s situation is eerily similar to that of Jordan Spieth’s in 2013. Because he isn’t a full fledged member yet, he is not eligible to accumulate Fed Ex points and play in the Fed Ex playoff at the end of the year unless he wins an official tour event before the playoffs start. Like Spieth, if he does win all Fed Ex points we be retroactively awarded going back to the first tour event he played in the 13-14 season. 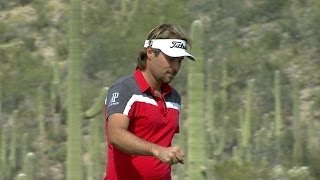 Don’t cry for Victor, this is just red tape he has to go through. I don’t see him winning as a likely scenario going forward, but he’ll have plenty of chances. If he doesn’t, he can dry his tears with $100 bills, sit out the Finchem-fuck-fest that is the Fed Ex playoffs, and start playing for millions again as soon as the Ryder Cup is over.

Some Lost Sticks And One With A Prick

Dubuisson is playing in this week’s WGC-Cadillac Championship thanks to his rising world ranking, errrr…….I mean…….he’s scheduled to play. As of this morning his clubs hadn’t shown up in Miami. How does that happen? I realize airlines lose shit, but those are your 14 best friends, your livelihood. Ship them direct if you have to! Treat them like children, buy a 1st class ticket for them. Just guarantee getting them there! A tour pro should never lose their tools. [Steps off soapbox, takes deep breath, wipes sweat from brow] Is that illogical or is it my OCD kicking in?

To give Vic something to do, the tour rats in the Titleist van made him a new wedge to play with that commemorates two heroic shots he played in the championship match against Jason Day.

Oh those clever club makers. With all the stamping Vokey does on wedges I was hoping Vic’s would simply say “VD” all over them. You know, as a warning to the ladies, not just his initials.