On Wednesday morning I was sitting at my desk trying to decide who to pick between Charl Schwartzel, Bubba Watson, Dustin Johnson, and Jordan Spieth for my weekly fantasy golf pick’em. About 30 hours later, Bubba had doubled his first hole of the day and my pick, Jordan Spieth had holed out for eagle to kick start his round in a big way. I thought I was pretty smart at that point. After 36 holes I looked again and Spieth was in contention while Bubba had barely made the cut. Then Bubba’s weekend started, and two bogey free 64s on the crispy, firm turf at Riviera left him in the winners circle and me slapping my forehead in disbelief of my stupidity. 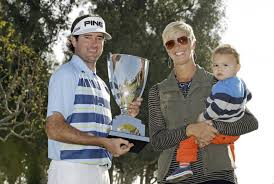 Two weeks ago in Phoenix Bubba slept on the 54 hole lead and faltered down the stretch on Sunday afternoon to hand the tournament to Kevin Stadler. You may recall that in defeat Bubba looked like a gigantic ass by blaming his caddie, fans, and anyone else he could point a finger at for his troubles. That trend continued today when Bubba barked at fans and photogs all throughout the 9th hole. But from that point forward he didn’t seem to be as annoyed by the crowds and media. I think caddie Ted Scott got in his ear and settled him down before the ‘annoyances’ got in his head. Why he didn’t do that two weeks ago is another story.

After his first nine 30 put him in 1st place, Bubba’s game was as steady as can be while making 7 consecutive pars through the 17th green. Nothing rattled him. Unlike his 4th round in Phoenix, he all of a sudden seemed calm (for Bubba). He lead the tournament in driving distance, but he also navigated around Riviera without a 3 putt. As poorly as he can putt at times, that’s a shocking stat to hear. Bubs made 5 to 10 foot par putts like I’ve never seen him. He wasn’t wishing them in the hole either, these were all center cut.

Bubba putting well is hard to beat, especially on a golf course that favors a longer hitter. This was Watson’s first win since his 2012 win at the Masters. Him winning is good for golf, good for fans, and really good tournament directors. It certainly makes my Sunday afternoons more entertaining.

When CBS execs saw Jason Allred, William McGirt, and Brian Harman in contention on the weekend they probably started drinking heavily. But a closer look at the leader board would have revealed that big names like Dustin Johnson, Bubba Watson, Charl Schwartzel and Jordan Spieth were also right in the hunt. For McGirt, having his first 54 hole lead ever on the PGA Tour ended up being too much for his nerves to deal with. He didn’t have his best on Sunday, but he’ll learn from it and get better. Harman’s mindset is probably similar to McGirt’s right now. While he didn’t play bad, he just didn’t have enough fire power keep up with the likes of Bubba and DJ.

The Johnson/Schwartzel pairing was a delight to watch, except on the greens. These two guys both found the firm conditions at the Riv to be to their liking, just as they have in the past. Charl and DJ bombed drives all day and took on hole locations others feared. They were quite entertaining and looked like they were feeding off each other. In the end, Charl didn’t make enough putts to make a charge to catch Bubba. DJ came up just one shot short to take 2nd for the second week in a row. He’s got to still be thinking about the 5 footer he missed on 10 today that didn’t hit the hole. It’s too bad because a win from him would have meant a lot more TV time for Paulina. She was looking lovely today in the gallery.

The big story of the non-winners from the Northern Trust is of course that of Jason Allred. CBS covered Allred’s plight quite well, but in case you missed it, Jason Monday qualified for the NTO earlier this week. He currently has no status on any significant professional tour. Allred previously had status on the tour twice some 5 and 9 years ago and both times he didn’t make nearly enough cash to keep his card. After qualifying for the NTO this week, Allred shot a +2 round of 73 on Thursday and the tourney was looking like a Friday trunk slammer for the journeyman.

A funny thing happened on his way to missing the cut….Allred carded a 64 to move up the leader board like a rocket. His 67-68 weekend rounds lead to a T3 finish and $388k for his troubles. That amount is more than double his previous career tour earnings and it goes a long way toward helping him gain playing status on some tour somewhere. But his Cinderella story gets better. His wife is pregnant and expecting a child in two weeks! Congrats to Allred on a great tournament and I hope to see more of him on tour in the near future.

CBS was solid again over the weekend as you would expect. They had a good field, eventually a great leaderboard, and perfect weather to show from L.A. to all the folks snowed in east of the Mississippi. If you didn’t see Saturday’s broadcast, Nantz had his pal, Fred Couples (newly appointed Northern Trust Open ambassador), in the tower to close the final hour CBS was on the air. Fred was fantastic, which put the following thought in my head:

Fred is a natural on TV. @NickFaldo006 better look out. He's one tweak of Fred's back away from being unemployed.

Don’t think that could happen? Ask Lanny Wadkins how quickly things can change at CBS. Nantz and Fred are butt-buddies and likely even Eskimo brothers. Faldo is an aloof Brit who’s gotten a bit lazy in his research in recent years. He’d have his Golf Channel gig to fall back on, but in my opinion, the only reason Freddie hasn’t jumped into the booth with Nantz is because he loves to compete so much still. He wants to be the Prez Cup Captain, he wants to play in the Masters, and he likes playing the Champions Tour. Like I said, if Freddie’s back goes any time soon…..well, Nick should watch his back.

Last week at Pebble Beach DirecTV provided extra channels to supplement the coverage being aired on CBS. This included the Launch Pad channel that shows Trackman and ProTracer data on a given hole (ball speed, launch angle, carry distance, total distance, spin rates, etc.). For some reason at Pebble this feature was set up on the 16th hole. There is very little strategy to that tee shot. If it isn’t cold and windy most players are laying up by hitting less than driver. Why waste the opportunity to use such technology on that hole? Additionally, the Trackman wasn’t calibrated correctly and was reporting extra low launch angles. The whole thing sucked. This week at the Riv CBS had Trackman on hole 11 for Saturday play and hole 17 for Sunday play. Both are par 5s where the players all hit drivers. They showed us accurate carry distances, flight paths, trajectories, and overall distance. I really enjoyed it and wish all networks broadcasting golf would do that on a par 5 every week. They could improve on it a little by also showing viewers ball and club head speed.

Surprisingly, Gary McCord was the weak link of the CBS crew today. He didn’t do anything awful, but he wasn’t paying attention. When Jason Allred stuck around to contend for the weekend McCord kept noting that a top 10 at the NTO would get him into the next event. McCord kept saying the next event would be the Honda Classic in two weeks because next week the top 6o some players are in the WGC Match Play. Nope. Sorry Gary. While it’s true that a top 10 showing gets Allred into the next event automatically, it doesn’t get him into the Honda. There is an opposite field event going on next week on the tour in Puerto Rico in addition to the match play. It pretty much includes every player that isn’t in the match play that wants to be. Allred will be exempt into that event.

There were a few candidates for the shot of the day but only one can win. I loved the shot DJ hit out of the trees on the 10th to give himself  a short birdie chance. But DJ missing the putt nixed it. Charl’s hole out on 14 was pretty sporty and one of very few birds made on the hole in round 4. However, Bubba did win the damn tournament so I gave his hole out on 6 the benefit of the doubt.

It wasn’t even as pretty as Furyk’s chip at 6 yesterday, but it likely was the difference between Bubba winning and having to face Dustin Johnson in a playoff. To the victor go the spoils.

4 Responses to Bubs Wins At The Riv: Final Thoughts On Northern Trust Open