I Love The Smell Of Euro Golf On Sunday Morning

I can’t say as though I’ve ever watched or given a shit about the Turkish Open in years past, but the wizards that run and sponsor it hit a home run this year by getting Tiger Woods to show up and play. His $2.4 million appearance fee was worth every penny. Yet, in the end, the event was won by one of the lowest ranked players in the field, Victor Dubuisson (pronounced dew-bwee-sun).

Dubuisson played steady golf for his first two rounds, but his 9 under 63 in round 3 gave him a comfortable margin heading in to the finale. Being pursued by the likes of Tiger, Rose, Stennson and Poulter, he’d need every bit of that margin to prevail. On Sunday Dubuisson got out of the gate slow while all of his pursuers were making birdies. After this shot by Jamie Donaldson on the par three 16th and VB’s subsequent bogey, the two were tied with multiple super stars not far behind.

Watch that clip again and take a look at Donaldson’s scorecard when they show it. That’s scary good. It’s hard to believe that back nine wasn’t enough for Donaldson to get the win. He even piped two shots on 18 to give himself an eagle chance that eventually led to a tap in birdie. However, Dubuisson made birdie at 17 to retake the lead and then another at 18 ensure victory.

Winning the Turkish Ailrines Open vaults Victor into the top spot in the Euro Tour’s ‘Race To Dubai’ which will be settled next week at Jumeirah Golf Estates.

Woods showed up, played hard, and tied for 3rd with Justin Rose at the Turkish Open. His 63 in the 2nd round was some of the best golf he has played in 2013. His 70 the next day might have been some of his worst as it seemed every shot he played that day was from the trees. His army golf (missing left, right left) on Saturday left him 6 back of Dubuisson to start the last round. Tiger would have his chances. He made enough birdies early to get within striking distance and with 3 par fives on the back nine anything could still have happened. His tee shot at 11 wasn’t bad, but it found the rough less than a yard off the fairway. 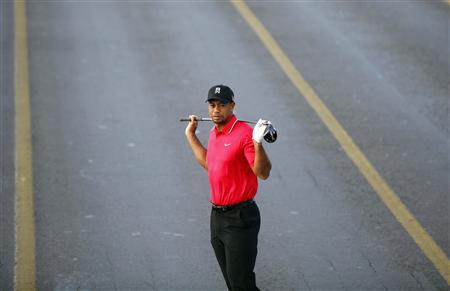 With a decent lie but an awful stance TW pulled some heavy lumber from his bag and blasted away in an attempt to still reach the green in two. It was quite an effort as he attempted to hold a fade against a hook like with what appeared to be a 5 wood out of the rough. In all likelihood, he had about a 15% chance to pull it off. The shot missed the green just left but caromed off the side slope into a spot that would be nearly impossible to get up and down from for his birdie. Tiger went ‘all in’ on this shot too as he likely had to, however, he misplayed the shot and left himself some 60 feet on the other side of the green for a birdie attempt. His 3 putt from there sealed his fate for the week. Making birdie on 4 of his final 6 holes wasn’t enough.

In all honesty, if you missed the Turkish Open, you didn’t miss much. Outside of watching Tiger, the most entertainment you’d have had over the weekend otherwise was watching Ian Poulter. When Ian played shitty enough to be cut from the PGA Tour’s Fed Ex Cup Playoff’s in September he went home to Orlando and took time off to re-tool his game. The results have been impressive thus far and it’s clear his game has now returned to form. Ian has told the media that he’s ready to win again and that playing this well and not winning is quite frustrating to him. Blah blah blah Poults. That’s all talk. Shut your vagina up and win.

In Turkey on Sunday when his eagle putt lipped out Poulter tossed his putter to the ground in frustration. On Saturday as he prepared to strike his tee shot a fan tried to distract him by crunching a tin can as Poults pulled the trigger.

(The Chicago Duffer has more on this little blow up on his site linked here.)

You could sense that he was about to snap. He was also caught on camera berating photogs and fans about when and when not to take pictures. Outside of the biannual Ryder Cup matches, I typically like Poulter. I don’t usually agree with him, but I don’t root against him like I would Vijay Singh. Still, there are enough instances in the course of a year in which Poulter steps in it and I’m going to call him out. This is one of those instances.