You knew the PGA Tour’s 2014 season started this weekend, right? I told you somewhere, didn’t I? Of course I did, but you weren’t paying attention and were too busy to notice because you were watching football, picking pumpkins, and drinking (hard) cider like the lush you are. But hey, that’s what I’m here for, to make sure you don’t miss shit like the story lines that unfolded at the opening event of the PGA Tour season.

What did you miss? You missed the Frys.com Open played in California that was won by journeyman Jimmy Walker. Walker’s final round 66 put him two ahead of the field and allowed him to capture his 1st PGA Tour win. There’s really only one word you can use to describe a victory for Mr. Walker………DYN-O-MITE!!!!!!

If you’re too young for that reference, I can’t help you and probably have t-shirts older than you.

Jimmy Walker had previously played in some 180+ events in his career without a victory. You see Cub fans, there is hope. Just wait until the year 2090 and you’ll get your World Series. Unlike the Cubs, Walker has always shown flashes that he was capable of getting to the winner’s circle. Shit, he’s gotten me to pick him every year I can think of in Fantasy Golf for some offbeat event. He’s also had a few 54 hole leads for which Sunday didn’t end with him hoisting a trophy. For whatever the reason, JW hasn’t been able to finish the deal when he’s been in contention.

Sunday in San Martin that all changed. Walker nabbed a cool $900,000 clams for his efforts and saved us all from a victory for Vijay “Sad Sack of Shit” Singh, who finished 2nd. Of course the victory also punched his ticket to Augusta for the spring and provides Jimmy with a 2 year exemption to the good life provided by the PGA Tour. By the way, Walker isn’t your typical tour pro. As chronicled in a recent Golf.com article, he’s an amateur astronomer and takes pictures of the night sky in its glory. You can view some of his work from his website here.

Congrats on breaking your PGA Tour hymen, Jimmy. See you at Kapalua and Augusta.

The real story at the Frys was that young gun Brooks Koepka, another former collegiate wonder kid, was all set to snag victory and earn official PGA Tour membership all in one swoop until a bunch of back 9 bogies knocked him out of the hunt. Brooks played his collegiate golf at Florida State and was an All-American. He didn’t qualify for a tour card via Q-School or take advantage of sponsors exemptions like Jordan Spieth did. Like Spieth a year ago, he has no true status on the Tour. 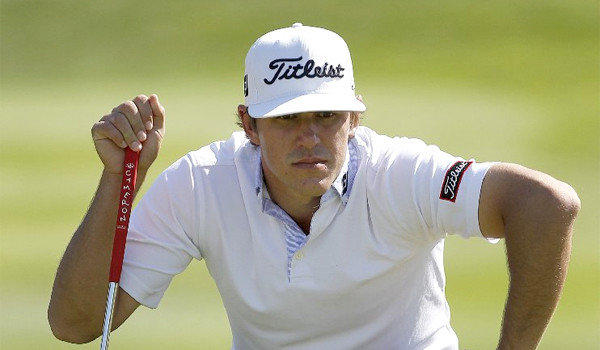 Instead of Monday qualifying and playing Web.com events he’s filled his passport like Peter Uihlein and has played overseas on various tours in his attempts to gain passage to the PGA Tour. The media has finally started to notice that he can play because he’s actually won on these lesser tours and moved all the way from “Not Ranked” to World No. 100 before last weekend.

In 2013 alone Koepka played professional golf in some way/shape/form in 15 different countries. That’s insane. Most people don’t leave the town they live in that many times in a year. It’s even more insane for a golfer. A former mini-tour pro I worked with once told me, “it’s hard to take your game on the road”.  In other words, playing good golf, for a living, while traveling, is damn near impossible. I’ve found that to be very true in my own tournament experiences. It is indeed hard to take your game on the road.

The road sure doesn’t seem to be an issue for Brooks, and the fact that he’s already proven to be successful while jumping around from continent to continent tells you he’s got the mindset and the game to win and win big. His hiccup at the Frys was nothing more than a learning experience. After his round he told the media almost exactly that and was ready to move on to Las Vegas for the next event. He didn’t bat an eye, he appeared grateful for the opportunity to compete at that high of a level, and I won’t be shocked if he contends again this week.  By virtue of his top 10 finish from the Fry’s he’s automatically in the field in Vegas.

Hey Caroline, Why The Long Face?

Reports began to creep out in the last 24 hours that Rory dumped his girlfriend, tennis tour pro Caroline Wozniacki, and she’s heartbroken over it. Well, of course she is. He’s going to make a gazillion dollars over the next 20 to 40 years and she’s near retirement age for female tennis stars. She probably planned on living out her golden years with him. Meanwhile, he’s decided to take Gary Player’s advice to rid himself of girl problems and focus on getting back some semblance of a golf game that he had in 2012. Honestly, where was the relationship going? Both had been number 1 in their profession recently and the longer they dated the further both dropped in their respective rankings.

Is it that simple that the result of the break up will be better golf for him? No, probably not, especially when he’ll still be forced to (under contract) keep those shit Nike clubs in his bag for eons. As much as I don’t find her attractive (by now the 100 references to her horse face must have sunk in), she does seem like a sweet girl and I do sort of feel bad for her. And look at Rory……he’s like the Raggedy Andy of Golf isn’t he? Of course that means nothing when you’re rich and famous so I expect an upgrade from him in the WAG department when he next gets locked down. As long as his next piece isn’t Miley Cyrus I think he’ll be just fine.

I find the timing of the break up to be interesting. As you can tell by the picture above, Rory hit the links last week with former President Bill Clinton, the worlds most famous philanderer. The two golfed, presumably chatted for four hours, and then attended some charity shindig with uber-douche Bono.

That can’t be a coincidence, can it? If Rors starts banging fat chicks we’ll know who to blame.