Posted on October 9, 2013 by shutfacegolf

The Cherry On Top

The best part of these concocted team golf events is that the players all bring their wives and girlfriends to put them on display for us. The captains include the wives in wardrobe selections and make them part of their team for all intents and purposes. It’s a lovely charade, but it makes everyone happy and we get to see how hot these ladies are. I didn’t include much mention of the WAGS in my last post because I knew you would want to be able to give them your full attention. Please keep in mind, I’ve already highlighted most of these ladies somehow/someway in a post on this site in the last 10 months so I’m not going to beat a dead horse. Now without further adieu, here’s the lovely ladies of the 2013 Presidents Cup, with my full honest but crass commentary to accompany them.

Amy Mickelson- Oh, sweet Amy. The former cheerleader and Phoenix Suns dancer turned tour wife that is always at Phil’s side…..(sigh). She’s back on the scene after beating breast cancer and looking as good as ever. Am I wrong or was it cold in Dublin, Ohio for this picture.

Amy’s always willing to lend a hand, just ask Lindsey Vonn or Michael Jordan. Here she is helping push cattle……errrrrr……. a cart driven by Ms. Vonn out of the mud at Muirfield Village.

Amanda Dufner – There are plenty of men walking the earth that out kicked their coverage when it comes to who they married. Jason Dufner is one of them. Yes, he probably didn’t resemble Winnie The Pooh (replace the honey with a dip and it’s not far off) when she met him, but he does now and he’s got a 7 figure bank account. That’s what matters.

Hmmm……what’s that in the bottom picture? Her forehead might be getting a little too close to a five-head. Look out Duf!

Jillian Stacey (Keegan Bradley) – Just like Dufner, Keegs is another goofy looking guy with a hot chick and a large bank account. Life’s funny that way. I have no idea how he stumbled upon this fellow New Englander, but Bradley has done quite well for himself. Here’s his girlfriend Jillian. She’s delightful in every way from what I can tell on Twitter, so I’ll just bite my tongue right there until proven otherwise. 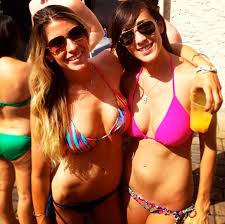 (Her on the left)

Then there was this shot that NBC gave us Sunday:

Did you miss it? It aired shortly after Keegan won his singles match. Tiger was about to clinch the cup on 18 so Bradley and Jillian quickly made their way near the green. She jogged for all of America in a tight red shirt. It was breathtaking. It also lead a bunch of you perverts to my site in your search to find out more about her.

Ellie Day – Mrs. Day often makes for a discussion topic on this site. If you want more of her, put her name in the search function on this page and enjoy. Here she is at the Prez Cup with Jason this past weekend.

The 2nd photo is of her watching the action with Graham DeLaet’s wife, Ruby. I can’t figure it out with Ellie. In some photos she looks like an absolute ten, in others she looks quite average. Whatever the case, she seems like a sweetheart in interviews so I’ll give her a pass for some bad pics. Plus, she makes Jason a very lucky man every morning (if you hit the link, scroll down to Winners and see Day, Jason).

Nadine Moze (Fred Couples) – I just told you about Nadine last week, so I won’t re-hash all that bullshit again with her. I’ll merely provide you with some pics from the weekend so that you can enjoy her some more.

Nadine on the left, above.

Lindsey Vonn (Tiger Woods) – Did you know these two were dating? I’m just fucking with you. I can’t for the life of me find anything good to say about Vonn. She disgusts me, but I know several of my loyal readers get off on seeing her chunky legs and manly jawline so I’ll post a few pics of her just to be fair. Yet, to be fair to myself all pics of Vonn must include other WAGS of the Presidents Cup.

There’s no truth to the rumor that a blacksmith was used to put on and remove the red boots from Vonn’s hooves.

There you have it. Buck up friends. This isn’t the end. I’m back with more Shutter Awards and the Tour is back starting its 2014 season on Thursday. Yeah, no shit…..and you thought the NHL had a short off-season.

1 Response to Obligatory Post: WAGS Of The Presidents Cup