Prez Cup Picks Are In, DJ’s Consolation Prize, & Don’t Be That Guy

Posted on September 5, 2013 by shutfacegolf

On Wednesday afternoon the President Cup teams for both the Americans and Internationals were finalized by captains Nick Price and Fred Couples making their choices for the wild card picks that complete each team. Price selected Marc Leishman and Brendon de Jonge. He told the media how hard it was to call Tim Clark and let him know why he wasn’t selected. The key word there is ‘call’. Fred Couples selected Webb Simpson and phenom Jordan Spieth.

I’ve got no problem with who Fred picked. As I stated in my last post, I would have gone with Furyk and Spieth, Furyk has the best match record in the history of the event by the way. Fred seemed stuck on the fact that Webb got bumped by Zach Johnson’s late birdie in Boston and that didn’t seem fair to him. How’d Spieth solidify his pick? You all saw the 62 he shot on Monday and his closing eagle. That grabs anyone’s attention. What we didn’t consider was who Jordan was playing with, one FIGJAM Mickelson. After his final round Phil called Freddie and said, “dude, you have to pick this guy”. Phil threw his weight around. Pun intended.

Where Freddie lost me was how he told Furyk that he didn’t make the team, which was via text. When the media asked about this Fred said he just couldn’t handle telling Jim with his a call. He vowed to eventually talk to him, but hadn’t at the time of the presser. That’s chicken shit. Fred is a pussy. When reached for comment Furyk stayed classy and stated that Fred had a great group to choose from and couldn’t go wrong no matter who he picked. Whatever. I wish he’d have taken a shit on Fred for the text, but I expect the PC move from the veteran. Has Jim played his last team event? Likely not, but you have to consider it a possibility at his age. They aren’t all Steve Stricker.

DJ Don’t Give A Fuck

Dustin Johnson of course was not selected for Captain Couples’ team either. When reached for comment he said, “uhhhh……oh……I thought that team thing was last year”. I kid. But do you really think he cared? He’s recently engaged and now instead of a spending a week of the fall in central Ohio he can globe trot with his fuck toy fiance. With the tour being off this week, DJ and the future Mrs. took to the Bahamas for some R, R, and F. Rest, relaxation, and well, you know…….

You think she just doesn’t eat or eats and pukes?

Some other site did a video similar to this earlier in the year, but this one is better. Dude Perfect put this summary together and hit just about every stereotype you can come across on the golf course.

At some point in every round, I’m about half of those. They probably forgot, “guy who’s played every course in the area”, “guy who is hungover” and “guy who has no business playing the back tees”, but they also hit a lot of main ones right on the head. Do you have any others?

You may have noticed the site has been a little low on activity in the past week or so. Well, I have a day job, and I was on vacation from it. When I leave town I leave technology behind too. It’s only fair. I probably had a bit of a mid-life crisis in the past month too and just haven’t had the time to get back to entertaining you folks for free. Fortunately, or unfortunately for some of you, I’m back now to provide wit and vulgarities, but mostly vulgarities. The problem now is that the tour is off this week, or a at least the tour the matters. What will you do without golf this weekend? Well, go play for one. I’m sure most of you will watch football. However, if you still need a golf on TV fix, check out the Walker Cup on the Golf Channel Saturday and Sunday. 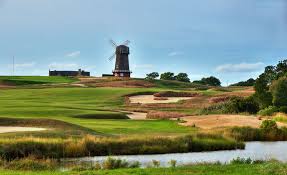 They’re playing at the National Golf Links on Long Island. It won’t disappoint. If you want more info and pics of the course, per usual, check out the Itinerant Golfer’s experience at the club. I hear the lobster lunch is phenomenal.

3 Responses to Prez Cup Picks Are In, DJ’s Consolation Prize, & Don’t Be That Guy