Posted on September 3, 2013 by shutfacegolf

Back In The Saddle

Four years ago Henrik Stenson showed his pedigree to the golf world by winning the Players Championship. I remember watching him lash at the ball thinking of him as a big Swedish robot that couldn’t miss a fairway or green. Oddly, over the next few years, Henson couldn’t crack an egg let alone make a cut on tour and his OWGR plummeted. So too did his status as a tour player.

With his Labor Day victory at the Deutsche Bank Championship Henrik Stenson is officially back into the top ten in the official world golf rankings. He checks in at number 6 this week and also leads the 2013 Fed Ex Playoffs in points. That’s pretty hard to believe of a guy that was at one point ranked in the mid 200s last year and started 2013 ranked outside of the top 50. Shit, before the Masters Stenson had to fire a low 4th round in Houston just to crack the top 50 and make the field in Augusta. He did so and hasn’t looked back. 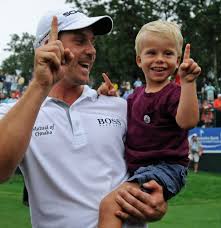 He played well at Augusta, but got better from there. Tied for 5th at the Players, 2nd at the Scottish, 2nd at the Open, T2 at Firestone, and 3rd at the PGA Championship. That’s pretty impressive, minus the fact that he hadn’t actually brought home a trophy in that stretch.

Stenson’s 4th round included an early bogey caused by hitting his 2nd shot at the second hole into the hazard. I was doubting his chances. But then Henson righted the ship after his early mistake and took the lead with a streak of birdies toward the end of the front nine. Steve Stricker made a late charge and threatened Stenson’s lead and I figured we were going to be treated to another dramatic Fed Ex finish with Henrik’s ball in the greenside bunker in two at 17. Stenson killed the drama when he did this:

From there Henson avoided a Van de Velde moment on 18 to secure Fed Ex Playoff event number 2 for 2013.

As in, this mother fucker is scared to win. There’s no denying it. We all know it. Garcia went 19 under through 54 holes at the TPC of Boston to set a tournament record for 3 rounds. Nothing changed from the time he putted out in round 3 to his first tee shot in round 4 for except the golf course got more rain and played easier. Yet Sergio posted a final round 73 (+2) and could do nothing but stand there and watch fellow competitor Henson pass and lap him.

Sergio showed early that he didn’t have the intestinal fortitude to win this one. He mishit an easy approach at one and hit a miserable putt. He again left his birdie putt short at 2 showing his nerves. Then, on the short par four 4th hole he hit his tee shot 60 yards off line into the hazard well right of the green. Can you explain this miserable play as anything other than shitting your pants?

Garcia is no longer a young man. At this point, he is what he is, and that is a choker. The evidence? Sergio has held ten 54 hole leads in his PGA Tour career. How many do you think he has won? 3. That’s right. 3. He’s also 165th in final round scoring average on tour. Numbers don’t lie.

I didn’t see enough of the coverage to critique most of what NBC’s on air slap dicks… ….errrr……… talent had to say about Sergio blowing up or Stenson’s stellar play. I’m sure Johnny Miller had a hard time not licking Steve Strickers’s balls and praising him for how he plays, how he putts, etc. Ever notice his odd love affair with Strick? It’s strange to me. What I did see plenty of is a guy in a red shirt playing the opposite nine from the leaders while trailing them by more than 10 shots. No, they didn’t show Phil that much. And why the fuck would FIGJAM wear red for a final round knowing the Big Cat was on the property?

I’m of course talking about the amount of TV coverage Tiger received during NBC’s final round broadcast. Yes. I absolutely know how much he matters to ratings. That’s a fact. He moves the needle no matter what place he’s in. However, he was a million shots out and playing like shit. This wasn’t a live broadcast due to the weather. NBC could have edited the coverage to show only good shots Tiger hit, or the really bad ones. Instead, as Johnny pointed out, they aired putt after putt after putt after putt that he missed. At one point, TW hadn’t made a putt over 6 fucking feet all week. That is insanely bad.

What we did see in the bonus coverage provided by NBC and the Golf Channel was Tiger and his daughter, Sam, leaving the golf course together during a weather delay. Why does it matter? Because she was wearing a matching red and black ensemble that clearly was put together to match what dad was wearing. That’s odd to me. Like something Michael Jackson would have done to his kids.

As for the rest of the broadcast, NBC did edit the coverage well enough to show the leaders tee off on the first hole and aired the entire final round for network viewers. That’s a plus, even though we’ve come to expect that at Fed Ex events. Still, we didn’t have many hole graphics, if any. We didn’t have enough player stats or data from their shots. And of course, I didn’t see ProTracer used anywhere, per usual. They did give us some pretty decent slo-mo shots of Sergio and Stenson’s swings. Those are even cooler when there is rain in the shot. The NBC crew also did a nice job of covering the two tournaments within the tourney, who’s making the next event and who’s making the Presidents Cup teams. What Dan Hicks has been good at for every event this time of year is letting viewers know where the players stand for the next leg, what they need to do to advance, and what the numbers next to their names really mean. Yes, this isn’t rocket science and Dan is being spoon fed much of that data and information, but he still has to communicate it well and he does so as a pro. Hicks and Miller also made sure to discuss the Presidents Cup standings and how those were impacted by certain players and their finish in Boston. Speaking of which…..

On Wednesday, September 4th, President Cup team captains Fred Couples and Nick Price will announce their captain’s picks at press conferences. After the last putt dropped at TPC of Boston the automatic qualifiers for both teams were set and we were left to guess at who each captain would pick. Let’s break this down.

Zach Johnson got in by making a long putt at his final hole in Boston. That bumped Webb Simpson out of the automatic qualifiers. Couples said his two picks would come from four players — Simpson, Jordan Spieth, Dustin Johnson or Jim Furyk. Furyk has been on every U.S. Prez or Ryder Cup team since 1997. Missing from Couples’ consideration is 2011 Masters champion Bubba Watson. That’s hard to believe, but likely the right call given Bubba’s play in the last 6 months.

I think Spieth is a lock. For Couples to pass on him would be a huge public relations blunder. All Spieth has done is out play 99% of the tour since July. That can’t be ignored. His final round 62 in Boston spoke volumes of how much firepower he has. Couples’ 2nd choice gets more interesting. I think he’ll take Dustin Johnson because they’re pals. Who should he take? Probably Furyk. He’s too valuable as a veteran to not take and his 2nd place finish at the PGA shows he’s on his game. Perhaps Fred will use Paulina to break a tie. 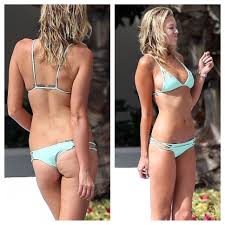 The late action in Beantown had little to no impact on the International team. Here’s their squad’s auto picks.

That group seems a little top heavy to me with Scott, Day, Charl, and Els. You know Cabrera will be fine. So who does Price pick on Wednesday? Those in the know like Tim Clark’s odds. I can see that. He’s been there before and Price probably wants another vet.
Marc Leishman had a strong finish and his top 20 this week should make it easier for Captain Price to pick him. Lucky for Price, Matsuyama’s name on his team likely means he won’t be forced to pick Ryo Ishikawa to help carry the Japanese media market. Ryo is nowhere near making the team otherwise, but there was a rumor from the last iteration of these matches that Ishikawa was forced upon the International team for this reason. Because Price has no issue like this to deal with, he has a chance to make his team stronger with a pick.

Louis Ooosthuizen is injured. I haven not heard if he plans to play. If not, will Price get a 3rd pick? I think Clark is in, and the last spot will have Price picking between Thongchai Jaidee, Leishman, George Coetzee, and Brendon De Jonge. Personally, De Jonge would be the guy I’d use with my pick. He makes birdies and is typically near the top of the tour stat for birdies made. You need that kind of a weapon in match play. He could be an equalizer.

We’ll find out soon enough. Who would you pick? Tell us in the comments below.