Hef’s Got Nothing On The King

The date was March 19th, 2013. That’s when this romance first blossomed. That’s also the day I told you about the dinner between Arnold Palmer and super model Kate Upton. Well, today Ms. Upton tweeted that she’d had another encounter with the King, this time for a golf lesson.

Based on her tweet it must be some shoot/feature for Golf Digest. Remember when they put Holly Sonders on their cover and gave her a feature in their April issue? Now something seems to be in the works with Upton and GD. I guess this site is not the only golf outlet that uses a nice pair of tits to bring in readers. Speaking of which…..

Arnold Palmer and Tiger Woods already have plenty in common, but now it’s apparent to me that they both also prefer blonde bikini models and like to bang fat chicks behind their wives backs. (RIM SHOT)

Remember the good old days when you could have a casual discussion at a bar about something and eventually, as more alcohol entered into the equation, two people involved in the conversation would disagree with each other and start an argument? Said argument would then turn into a silly wager based on one of the parties trying to prove the other wrong. This was and, in some rare cases, still is the criteria for a bar bet. Sadly, the smart phone has killed the bar bet, or bar room bet, because every cocksucker on the planet can Google an answer in 2.6 seconds and back off a wager. 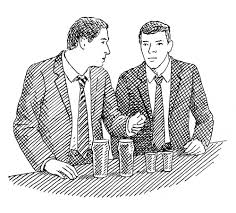 At this point you’re probably saying, “where the fuck is he going with this?”. Bear with me. Two friends of mine sent me a text on Saturday morning asking me to mediate their argument about LPGA players. The question, what percentage of the ladies tour members are gay? It’s an interesting question and a bit of a cultural phenomenon. No, I’m not a fucking bigot. I have no issues with anyone who is gay, but the LPGA has a reputation and no one has ever asked such a question, publicly. The tour denies that they have this image, yet when you watch the first women’s major every year (former Dinah Shore tourney), it’s obvious by looking at the crowd that Palm Springs has been invaded by Martina Navratilova look-a-likes.

Yes, many of the players are married, to men, with children. That doesn’t mean they are’n’t hiding something. I’m not being skeptical, it’s just the truth. The two that started the debate are pretty far apart in their opinions. One says 40% while the other says 80%. Personally, I think it’s almost right in the middle of that at about 65%. Lets take a sample. Look at the top 30 money leaders for the year and ask yourself how many of them do you think prefer the same sex?

Of those I’m counting 19 that I would assume are gay, not that there’s anything wrong with that. That’s 63%, and right about in line with my assumption of 65%. No, I’m not going to name names. There’s no reason to have a lawyer contact me about this. My point is, there is no way to Google this and settle the bar bet. Try it. You know what you’ll find? You’ll find that Christina Kim wrote a book and in it she said that only 10% of the tour is gay. That’s laughable. She probably thinks that because she wasn’t hit on by them that they’re straight. If you’re looking for hot trim as a tour lesbian, you’re not hitting on Christina, only the chubby chasers are. Perhaps the the chubby chasers are Kim’s 10 percent.

So what say you? There’s no science to this, you can judge it anyway you want. Weigh in with the poll below and leave a comment if you have a better method than me. I’ll lock the poll in 48 hours to settle the bar bet for these two rascals.

No, not really, but he did pull out of buddy Notah Begay’s charity event on Tuesday due to his ailing back. On Monday his back was reportedly feeling better and it sounded as though he was good to go for Boston. With his withdrawal from Begay’s event, his Friday tee time in Beantown is questionable and he’s not giving anyone any information on what he’ll decide to do.

This isn’t hard to figure out. Tiger is going to play. If he can finish he round on Sunday in the pain he was in, why wouldn’t he give it a go this week? If by some chance he does pull out, does the player ranked 101 in the Fed Ex standing get to take his place? I don’t know. What I do know is that because of the current standings, Woods is paired with Adam Scott and Philly Mick for the first two rounds. That’s must see television, but it won’t be aired at 8 am on Friday. If I was an executive at the Golf Channel I’d find a way to make sure that group was shown on my network even if I had to record the action with my cell phone.