You know the saying, and you know that by winning the PGA Championship you get to bask in all the glory of being a major champion for a little while. That’s exactly what Duf Daddy was doing in New York City after getting his name put on the Wanamaker trophy last Sunday. But before hitting the Big Apple, Mr. Dufner took the time to enjoy his victory and find out how many beers can be poured into the trophy. The answer is 43. 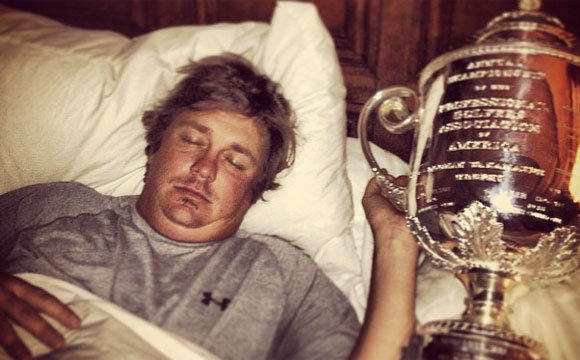 At least that’s what Jason told his first interview of the day on Tuesday. Who was that interview with? The one and only……..Howard Stern. In all my years of listening to Howard I can’t recall him ever having a golfer on as a guest. I suppose that tells you the kind of crossover appeal Duf-Daddy has in pop culture. Here’s a snippet of Duf’s appearance on the Stern Show:

I know I’m the guy that bitched about Stern and Poulter feuding in my timeline two days ago, but that’s just because I was cranky and didn’t want non-golf stuff in my feed during a Sunday round of a major. The truth is, Howard Stern is one of the best interviewers to ever grab a mic, you just have to get past the girl on girl stuff, guest porn stars, etc., he’s damn good. Stern showed that by getting Duf to come out of his shell early on Tuesday morning. Who else could get a current tour player to admit that no one likes Rory Sabbatini?

After the Stern Show Duf hopped around town and did Regis’ old show – whatever the fuck they call that now, the Today Show, and even showed up at the stock exchange. That’s a busy fucking day. Hopefully he’s ready to go for the Barclays in 200 some odd hours.

Also on Tuesday,  the PGA Tour announced that caddie races would no longer be allowed at tour events due to concerns about the health of the caddies. What the fuck? Is someone making these guys run with 50lb. bags on their backs? No. They do it for fun and for the enjoyment of the fans. Most of them aren’t old Grateful Dead heads like Fluff who could die from the physical exhaustion of such races. They can handle falling down on their faces like these guys….

Perhaps the tour is worried about their own asses and being sued by a caddie falling on their equipment and breaking a leg, wrist, etc. If that’s the case, have the caddies sign a waiver before the week begins and let them go. The fans love this shit. First the NFL takes away touchdown dances, then the NHL minimizes fighting…..now our caddie races? What is this world coming to?

When they showed Mrs. Dufner during the PGA Championship coverage all of America took notice because her guy won and then he grabbed her ass. But as I showed you in my previous post, Keegan’s Bradley’s girlfriend was really the bust out star of the crowd shots provided by CBS. I didn’t know her name, didn’t take the time to find it and referred to her as Hoots McGoots. As reader Heir Brotkopf pointed out, her name is Jillian Stacy, and she definitely passes the hot-without-sunglasses test.

Our friends at Busted Coverage gave this site a shout in their Monday Daily Dump for showing Jillian. Today, they picked up the ball and ran with it. Check out their profile of Ms. Stacy and a nice gallery of pics.

In other news, the PGA (not the tour who took away caddie races) has leaked info that their two marque events will take place at New York’s Bethpage State Park Black Course. First, in 2019, the PGA Championship will be played on Long Island. In 2024, the Black Course will host the Ryder Cup.

This wasn’t a surprise to many golf fans, but that doesn’t marginalize the decision to play both events there. What do I think of it? A+, home run, whatever you want to call it….they got it right. Bethpage Black was a course once left for dead. One day nearly 20 years ago former head of the USGA, David Fay, was out on Long Island kissing some rich bastard’s ass when he happened by the old course he’d known as a kid just for a look on his way back to New Jersey. What Fay saw was a classic old lady in need of a rebirth. A vaginal rejuvenation if you will. Fay’s vision and a financial commitment agreed to by NBC were all that would be needed for the Black Course to be restored to its glory and become host of the 2002 U.S. Open. With that open being won by Tiger and considered such a great success, the course quickly snagged a 2nd open in 2009.

The 2009 version was virtually washed out and produced Lucas Glover as its champion. The damp course didn’t defend par and with that the USGA decided it had had enough of of the municipal course and had better Long Island options for its major championship. Last year the tour stepped in and used the Black course as its host for the first Fed Ex event, the Barclays. Once that happened, any chance of the USGA using the course again was gone. The dandruff covered blue coats that run that governing body tossed Bethpage aside like a slut that fucked their buddy for a kilo of blow. Like several other courses the USGA has used up and moved on from, the PGA Tour and the PGA of America stepped in to sweep the coked up tramp off her feat to start anew. And that’s how we’ve arrived at these two marque events landing at the Black.

Oh don’t tell me this won’t be fun. Bethpage Black will most likely be the greatest home course advantage in the history of the matches. The crowds will be insane and New York fans won’t have it any other way. Medinah with Chicago’s boisterous fans probably holds such a title right now, and the U.S. still lost.

A 40 something Sergio Garcia, still majorless of course, won’t be able to avoid getting in to it with American fans in both events just like he did in 2002. Keegan Bradley, who considers the Black his home course (it was in college) tweeted his excitement about the news and is already politicking for his pal Philly Mick to be the captain. I’m not saying that couldn’t happen, but Phil will be 54 by then and will have likely captained a squad in the 8 years before that. I guess we’ll see. If a 48 year old Ian Poulter doesn’t make the Euro squad, the U.S. team might have a chance in that one.