Sneds Wins For Caddie, DJ Pukes On 17, Too Dark For Seniors & Final Thoughts On Canadian Open

Brandt Snedeker was the hottest golfer on the planet around mid-February of this year. Then somewhere on the back nine on Sunday while winning at Pebble Beach he tweaked his ribs and was forced to sit for a few weeks to let his injury heal. By the time he returned to the tour his game had cooled and only recently began to show signs of getting back in the winner’s circle.

When 36 hole leader Hunter Mahan withdrew before he began his 3rd round to get home for the unexpected early birth of his first child, the Canadian Open was there for the taking. Playing aggressively thinking he’d need to catch Mahan, Sneds went out in 29 on Saturday to jump to the top of the leaderboard where he’d stay until the end. Sneds told the media that he’d have to find a way to thank the newborn Mahan for taking her father out of contention. He also mentioned how much the Canadian Open meant to him since his caddie, Scott Vail, is Canadian.

Nice to see Brant back in his groove if you ask me. I don’t root for him, I think it’s his hair, but American golf needs him contending and staying ranked high in the OWGR. The timing seems just about right too for Sneds. He, like Matt Kuchar, has become a walking ATM machine. With big money events the next two weeks and the Fed Ex playoff starting soon, Brandt will be in perfect position to try to defend his Fed Ex title. He’ll also be on the short list of favorites going into the PGA at Oak Hill in two weeks.

Hunter Mahan and wife Kandi welcomed their first born into the world on Sunday at 3 something in the morning. From that you can gather that Hunter did make it home in time and they’ve released a statement to say that everyone is healthy and he has no regrets of his decision. Good for him. 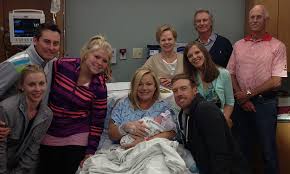 If only I had a ShutFaceGolf onesy to send them. Congrats again Hunter and Kandi. You think she’ll ever look good in a Dallas Cowboy Cheerleader outfit again?

What the fuck was Dustin Johnson doing on the 17th tee? He just missed eagle on 16 and was tied for the lead, then he wipes one 40 fucking yards off line and out of bounds. Nothing should surprise us from DJ. As Nantz noted when CBS confirmed his 1st shot was O.B., he did the same thing at the British Open in 2011 which pretty much handed the trophy to Darren Clark. Then the cluster fuck he made of the fairway bunker was icing on his shit-cake. Easy triple. Johnson has some of the highest highs and lowest lows in professional golf. A Paulina blow job might ease his pain. 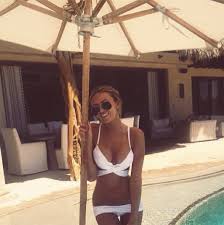 As for Kuchar, just another top 10 for him. He leads the tour with almost forty top ten checks in the last 5 years. What does that mean? Not much except for the fact he’s got a shitload of cash in his bank account. Kooch already has two wins this year so it’s hard to fault him for coming up short this week. He played well, he just got beat.

Mark Wilson didn’t figure in to the outcome of the Canadian Open, but he did have the shot of the day on the 9th hole in round 4.

That fucker was coming in hot. I’m not sure I’ve ever seen a ball hit the pin that hard and still find a way to go in. Golf is funny like that. Wilson’s shot easily could have gone over the green and turned into a bogey five. I’m sure he’ll take the deuce. Making 2 there instead of a par 4 earned Wilson over 70k.

It was a fairly nondescript week for CBS. Faldo and Feherty took the week off. Sir Nick was obviously still in the UK so he could take some frankincense to the newborn king. Kostis is still out on sick leave. Who knows where the fuck Verne is. Finchy jumped into the tower with Jimmy Nantz to fill in for Sir Nick and had an open mic.

When Kuchar and Jason Bohn were playing the 13th hole, Kooch missed the green well to the left while Bohn’s ball was nestled neatly about 9 inches away from the hole. Kuchar played his lob shot to the green and Bohn made sure to leave his ball unmarked to allow Kuchar some help to stop his ball on the green, which it promptly did, leaving Matt a tap in par.

On the tour you see this happen all the time. The players know they’re all out there playing for a living and that there is serious cash on the line. It seems there is an unwritten code to give your playing partner an advantage if the opportunity presents itself. Of course you never see Tiger do this, and why should he? When this occurred today with Kuchar and Bohn, IBF went on a mini diatribe about how the players have to stop doing this for each other. He and McCord agreed that the players have an obligation to protect the other players in the field they aren’t playing with and need to mark their ball in these situations.

To an extent I agree, however, if a guy in your group is playing ready golf and you have to get your ass up to your ball to mark it while everyone waits, then fuck it. Plus, if the guy is actually good enough to hit a ball laying on the green to use it to stop his, then by all means he earned the stroke he saved. What do you think? Like Kandi Mahan’s vagina today, I’m a bit torn. I bet Bohn regrets it. Saving Kuchar a shot there meant the two tied, along with 2 others for 2nd place. That likely cost Bohn $120,000. Respond to the poll and give your opinion.

While I’m at it, I’ll use this space to apologize to Matt Goggle for anything bad I said about him while he filled in for Kostis on the CBS telecasts. He’s pretty good, knows the game, and knows the tour. I think I called him the B team on Twitter or something the other day. I take it back. He’s rock solid and likely has a more informed and accurate opinion of anyone on the network’s crew. Keep up the good work Mathew.

Perhaps you tuned into ESPN before the Canadian Open came on thinking you’d catch the end of the Senior British Open. You thought wrong. In the bizarrest of the bizarre, Bernhard Langer and Marke Wiebe couldn’t get their playoff finished before the Scottish sun set on Sunday. What’s strange about it is that it is light until nearly 11 pm over there this time of year.

Of course they wouldn’t have been in this situation had Langer just made bogey on the final hole. The German senior pro instead made a tidy double and let Wiebe back in to the tournament. After two playoff holes darkness set in and now the two will have to come back and try again on Monday morning. Remarkable (in my best Peter Alliss voice).

Thanks Bernhard, now I have set my alarm for the middle of the night just to watch!