Located in the golf Mecca of the Midwest, Gaylord, Michigan, the Treetops Resort is home to 5 golf courses, a spa, and enough ski slopes to keep you busy for an entire winter weekend. The Masterpiece course was Robert Trent Jones, Sr.’s final design in Michigan and Jones himself claimed it his crowning glory. The course is located at the headwaters of the Pigeon River and winds through natural valleys, ravines and broad plains. The signature sixth hole features a 120 foot vertical drop and a panoramic view of the Pigeon River Valley.

The Jones Masterpiece was the first course built at the resort. It opened in 1987 and is known as ‘the one that started it all’. The hotel and most of the condos, villas, chalets, and other lodging are located near the Jones course, while the other 63 holes of golf are found down the road. This includes the world renowned par 3 course, Threetops.

Northern Michigan with its dense forests, pristine lakes, and natural sand dunes is never short on scenery. The Jones course at Treetops is no exception. From the minute you step foot on the practice range you discover that the resort is aptly named. Views of the valleys down below are seen from all angles and your golf ball appears to hang in the air for an hour on a drive or mid iron shot while you stare at the tops of the trees in the distance.

The design of the course provides a nice mix of short par 4s, long par 4s, reachable par 5s and gives par 3s that will likely require you to hit a different club on each of them. That makes for a fun round. As your round moves along you end up further away from all civilization and the main buildings of the resort. Don’t bother trying to use your cell phone, it likely won’t have a signal, and that’s not a bad thing.

The routing of the course is that of a traditional out and back links course as the tenth tee is practically in another county from where you first entered the resort. Because of the five par 3s the Jones course only plays to a par of 71. Most of the holes play severely up or down hill either off the tee or to the green and you’ll likely not have a flat stance/lie when playing your approach shots all day. This terrain certainly is visually appealing at first glance, but it’s a pain in the ass trying to judge distances and hit solid shots into elevated greens.

The greens are large and very receptive, but hard to read due to the peaks and valleys they rest in and on. Only in Hawaii have I encountered more putts that seemingly break uphill. The breaks in the greens of course don’t actually defy gravity, it’s just that a man made mound on one side of the green can confuse your eyes and make you forget you’re putting on the side of a ski slope that will force your ball to break toward said mound.

I played the other courses at this resort almost a decade ago, but had never played the Jones course. Treetops’ stable of designers also includes Rick Smith, who has his name on the resort’s golf academy, and Tom Fazio. Both the Smith and Fazio courses were in ideal condition and perfectly maintained when I played them years ago. The Jones course in 2013 isn’t up to snuff with it’s resort-mates. Due to the heatwave being experienced during my travels, the greens were being kept excessively hairy and were also over-watered. We could literally see our footprints as we walked around the greens.

I also found the bunkers to be in need of some TLC. They were typically either barren of actual sand or had so much in them you began to sink when stepping in. The fairways were in good condition, but the rough was excessively long and strong for resort play and there was no intermediate cut near the fairway. This meant that missing the primary cut by 4 inches lead to a half shot penalty. That doesn’t fly with me outside of a U.S. Open. It slows down the pace and frustrates the casual golfers touring the course.

There’s a ruggedness to the course that is supposed to be there given the setting, location, and region, but the current staff is pushing the edge when it comes to that.  It’s hard for me to give the Jones course too high of a score in this category knowing the standard set at the other tracks and neighboring facilities.

During it’s peak season the 3 big courses at Treetops are $120 for their rack rate, but they offer plenty of discounted rates and price breaks on Golfnow, as well as through their own stay and play packages offered via their website. During the shoulder seasons of spring and fall the golf course is discounted by almost 30%. The fall is a pretty nice time to be in this area too as the leaves changing colors around you are stunning.

If you’re getting on any of the Smith, Fazio, or Jones courses here for $70 to $85 you’re getting a good deal. Paying $120 here would have infuriated me as the course is not worth that in any capacity in its current condition. There are too many other options within 10 miles that aren’t going to cost you but half of the Treetops rack rate. Those courses won’t have as dramatic of views and name architects, but they’re perfectly adequate to play for a 2nd 18 of the day or warm up to your weekend.

Because it is a resort course, you have to expect a slower round here, but being a resort course should also mean that you’re getting great service. On my visit, the pace wasn’t terrible, but the service was sub par. The girl at the halfway house (11/18th house here because it comes after you play the 11th hole) was more interested in her text messages on her phone than she was getting drinks, hot dogs, and other goodies for my playing companions. Was she cute? I knew you’d ask. She wasn’t bad, but I probably had 15 years on her and tried not to check her out too much.

The starter was one of the worst I’ve seen in all my experience playing a resort course. He didn’t know if the 1st fairway was clear and allowed me to hit while the group in front of me was still in the rough in my landing zone. He provided no direction as to where we’re even going on the first tee. He explained that we should play ready golf, but didn’t give a single fucking hint at what that means. I know what the fuck it means, but do you think half the people on the course do?

The rest of the staff was at least average in performing their duties. They didn’t do anything to make you notice them, but that’s not always a good thing. I will give the ranger/golf course assistant a nod. That guy was personable, well trained, and got the slow fucks in front of us moving…..albeit after we sat behind them waiting for 6 holes.

The resort has almost everything you could ask for given its location. The town of Gaylord is probably 10 to 15 minutes away, and I once had to make that drive on a late night booze run, so stock up if you’re staying at Treetops and buy in bulk before you arrive. Once you have your necessities, the resort does the rest. Food here is ok from what I recall in my past stays, but nothing fancy.

If you’re staying at the newer lodge the rooms are nice. I didn’t enjoy my stays at the condos or the chalets, but those have been torn down or remodeled and might be nicer now. As you’ve seen by the logo there is also a spa that I have not experienced at the resort. Mrs. Shutface says the spa is nothing special but does the job. Of course you can also ski here all winter.

The carts are basic and lack GPS capabilities, which I think is a problem on a course like the Jones Masterpiece which has many blind shots. If you don’t have caddies to help you out, the course either should be straight forward or have better yardages on the card or yardage book.  The practice facility is alright, but only average for a resort that markets itself as high end. It sees plenty of traffic and you’ll notice a large amount of hacker divots that haven’t been property filled in with seed. The practice bunker and chipping area is cool looking but is also beat to shit like an Ike Turner girlfriend.

Even with the soft greens and slower speed, this course is flat out fucking hard. Literally, hide the women and children from playing here. It’s not friendly to even low handicap golfers. The fairways are wide and provide fair targets and landing zones, but if you miss them you might as well re-tee. The same can even be said for a few of the par 3s. If you do manage to hit a fairway, you have some type of side hill, uphill, down hill bullshit stance that makes your approach shot overly difficult.

I’m sure if you figured out the course you’d start to learn the flat spots to hit your tee shot to and how to play it, when to attack, etc., but it would take a few loops around to start to get that feel. Who’s doing that at a resort course with other courses to play?

As you’ll see on the scorecard, the Jones track rates at 75.0 and has a 143 slope. This is far lower than another course I played on the same trip (The Bear at Grand Traverse Resort), but the course is actually much tougher, in my opinion. The yardage on each hole means nothing here. The 406 yard 7th hole played driver/8 iron straight up a hill with a back pin while the 452 yard 8th played driver/gap wedge down hill to a front pin. That doesn’t make the course any tougher, but it sort of mind fucks you and wears you down. Take note that the signature hole, the par three 6th, was lasered at 185 yards and played 150. Bushnell rangefinders with slope were made for courses like this. 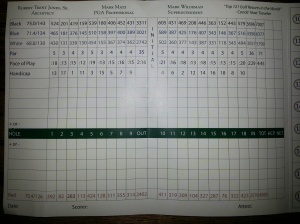 As I noted above, Jones called this his crown jewel. I call that bullshit. Point O’Woods near Benton Harbor, MI is by far the best course he did in Michigan, but that’s private and doesn’t have to go around marketing itself as a RT Jones design. Jones also has a whole slew of courses in Alabama on the RTJ Trail that are better than the Masterpiece at Treetops.

Per usual, this rating isn’t based on a 5 being “way too fucking hard”. I’m rating a course a 5 when I’d say it’s playable and enjoyable, but not easy, for players of all levels. This course is overly harsh, that’s why it’s getting a lower score in this category.

The Jones Masterpiece as Treetops is worth playing at anything under $90, so check Golfnow.com if you’re in the Gaylord area. If you’re staying at the resort, play it, the Fazio, the par 3 course, and the Smith Premiere and see what you think. If you do play it, I hope the superintendent has figured out the conditioning, the bunkers, and you have a more enjoyable experience than I did.