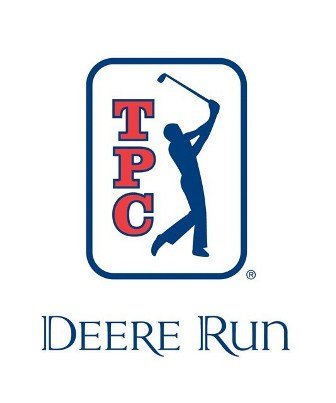 Located in Silvis, Illinois, the Quad Cities region, TPC Deere Run has hosted the PGA Tour’s John Deere Classic since 2000. The course was featured as one of America’s 100 Greatest Public Golf Courses by Golf Digest, as well as ranked fifth in the state of Illinois by GolfWeek Magazine. It is built on the site of a former Arabian horse farm and designed by a native boy from Illinois, former tour pro D.A. Weibring.

Are you wondering where exactly Silvis and the Quad Cities are? It’s about 2.5 hours west of Chicago and sits on the western border of Illinois, or the eastern border of Iowa. In other words, it’s in the absolute middle of nowhere.

Getting to Deere Run is half the fun. I doubt many golfers actually line up a trip to the Quad Cities intentionally. There just isn’t much there to do. I did notice a casino around town that could likely entertain you for an hour or two if need be. If you’re not staying in town, you’re likely flying past cornfields between Chicago and the Iowa border. It’s an amazingly flat and boring drive until you approach Silvis. At that point the topography of the region completely changes and becomes interesting with rolling hills and rivers that help to shape the golf course.

The course itself and the land its built on is anything but boring. The Rock River runs along part of the property and edges right up to the par three 16th hole. TPC Deere Run gives you a little bit of everything in it’s surroundings. Some holes make you feel as though you’re playing a parkland golf course while others are more open and exposed to the wind and elements in a links style. Weibring’s use of the river, natural water hazards, and natural elevation changes down to and away from the river also give you a nice variety of challenges to keep you guessing.

The routing of the course is efficient as both 9s lead you back to the clubhouse. The variety of holes is adequate as you’ll play short par 4s, long par 4s, and par 3s of all lengths. My one knock on the layout is that the course is a par 71 for really no reason at all. The par four 9th hole plays near 500 yards from the tips. Why not just make it a par 5 with another 30 yards or so to protect par? It would give players another chance at birdie or even an eagle.

I also liked the chipping areas Weibring provided around some of the greens. You won’t see them consistently around the course, but they are used in fitting locations where you are provided a bailout area or false front. Take a look at the first picture in this post for an example. That’s the par five 17th. It is reachable in two, but the shaved areas around the elevated green will test your short game skills if you have to get up and down.

Deere Run hosts a tour event, so of course it is in great condition. The greens are quick, but probably not over 10.5 on the Stimp meter. The fairways are plush, the rough is moderately healthy, and the bunkers are damn near perfect. I tip my cap to the super that’s in charge for keeping this public track ‘tour ready’ for most of the days it is open.

If there is a knock in this area it’s probably the fact that the course does get a lot of play and you can see worn areas from the number of outings it hosts. The staff fills the divots, but if you hit enough fairways during your round you’ll probably be in a sand filled one at some point. 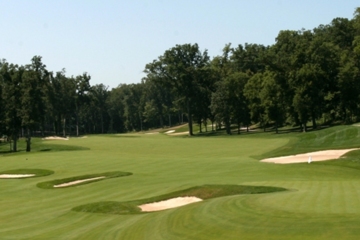 Some of the greens struggle for daylight and because of the location near the Rock River there is plenty of humidity during the summer months to give the greens staff a challenge. You’ll notice the fans blowing near shady greens to help deter the humid weather and lack of light. It’s good that they have these around. The course also might over water the greens just a bit due to the humidity, which can make them a tad bumpy later in the day, but your approach shots will certainly hold.

They don’t over-water the fairways and I noticed that the course drained quite well. That’s a plus too because you won’t have 270 yard drives back up a few feet when they land.

During it’s peak season Deere Run gets $95 for their rack rate, but they offer plenty of discounts/twilight rates and price breaks after certain times of day. During the shoulder seasons of spring and fall the golf course is discounted by almost 50%. That’s pretty fair and I’d even go as far as to say the $95 rate is decent when you consider the fact that the course hosts an annual tour event.

What other PGA Tour tournament host course has a price tag that low? San Diego residents playing Torrey Pines North might pay less, but that’s likely the only exception. I’d be curious to know what the locals think of the pricing.

This is in every way, shape, and form a daily fee public course, TPC or no TPC. It barely has a collared shirt dress code, if at all. That’s just not the style of the community around it. I made the trek to play it with my buddy Hwang and he didn’t even have to conceal the fact that he’s Jewish.

Because of the accessibility TPC Deere Run provides to all, you have to check your expectations at the door. The staff is perfectly friendly, especially the starter at the 1st tee, but after that you aren’t likely to see anyone except for a beverage cart here and there. The service provided is merely ‘adequate’ in this regard.

The beverage cart service is average, and you’ll see the chick enough, as noted above, but the food in the restaurant flat out sucks. You’d expect at least a bit more from a facility like this, but like I said before……it’s a daily fee facility in the middle of nowhere. You have to check your expectations.

TPC Deere Run is merely ok in their clubhouse and facilities. They claim to host weddings, events, etc., but I have a hard time believing those come off well after seeing the service and food that comes from the restaurant. As for lodging, there isn’t much around TPC as far as options. There’s the Super 8 down the road where Matt Every got busted with pot a few years ago and not much else.

Of course there is no caddie program. You can’t expect one at a place like this, but I think it would go a long way to increasing your experience at the course. They have a community around them to find kids to employ (if they’re not too busy working the fields). Why not put them to work and let them learn golf and get paid? Not only would the caddie program help kids, but it would add to the PGA Tour experience that Deere Run is trying to sell you on. You don’t see Steve Stricker getting his putter out of his bag on his golf cart as he walks up 18 here.

The practice facility is pretty nice and well above average for a daily fee course, even if it is a TPC. The practice bunker mirrors the condition of its counterparts on the course and the same can be said for the putting green and its speed.

I think when you see tour pros put up scores in the low 60s here you anticipate that the golf course will be easy. Paul Goydos hits it about 250 yards and he shot a  mother fucking 59!!!!! From the same tees, the small in stature tour pro known as Sunshine only beat me by 20. That hurts.

Even though the greens are receptive and the fairways are generous, the course is hard. I’ll give Weibring plenty of credit for designing the course in such a way that it is enjoyable but no pushover. From the TPC tees it’s rated over 75 with a mid 140 slope. No matter how you slice it, that slope and rating tell you that this isn’t the pitch and putt course that the tours pros make you think it is.

At the same time, Deere Run isn’t a terribly demanding course for the average bogey golfer. There aren’t a ton of forced carries and some green complexes will even allow a less skilled player to run the ball on to it without hitting a high approach shot.

Per usual, this rating isn’t based on a 5 being “way too fucking hard”. I’m rating a course a 5 when I’d say it’s playable and enjoyable, but not easy, for players of all levels.

TPC Deere Run is worth a visit for any golf nut passing through the Quad Cities area, but perhaps too far off the beaten path to call it a destination. The setting and course conditions make it fun to play, but the lack of high end amenities, service, and anything else around it make it hard for me to tell you that it is a must play.

Obviously this review was posted today in anticipation of the John Deere Classic being played this week in the Quad Cities. Take a look at the course during TGC and CBS broadcasts this week and tell me what you think.