Rehab Is For Quitters

Grow The Fuck Up

Michelle Wie is now a college graduate and full fledged adult. Someday perhaps she’ll act like one. Once considered to be the next big thing in golf – not women’s golf, ALL of golf – Wie has merely become the next big disappointment. Her star power is waning because of her on course antics and shitty game. She still draws fans to the women’s game when she plays, but how much longer can that last without her backing up all the hype? 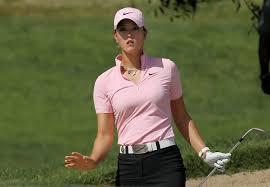 Last week at the Women’s U.S. Open Michelle Wie started out with a big fat 80 on Thursday and another missed cut for the weekend became inevitable. After hacking it around on Friday with an over par round through 17, she just had to go through the motions, pack her bags, and get out of town. Then the fog rolled in, play was suspended, and Wie was forced off the golf course and play was scheduled to resume early the following morning. Michelle didn’t show. She called the USGA and said she was sick and was withdrawing from the championship.

My guess is that Michelle’s bank account is nicely padded from her Nike contract and other various endorsements. There’s no reason she had to skip town early. It’s not like she’s a mini-tour pro that could save costs from a night at a hotel by WD’ing. I’d give anyone struggling to pay their bills from golf a pass for that. But those are the players who wouldn’t leave early no matter what the situation. You may think I’m being hard on her, well, I am. She’s supposed to be a super star in her sport. Some little kid probably headed to the course that day expecting to see her play because they figured she’d make the cut. By Saturday they likely knew they probably would only get to see her play one hole and got up super fucking early to get to the 18th tee just to watch her…….and she’s not there.

She Could Learn Something From This Hack

I think we’ve all had a day when we showed up to the course and didn’t have it, couldn’t find it, and had everything go wrong that could go wrong. Indiana assistant pro Michael Bembenick had such a day last week while playing in a Web.com event. I believe Michael was playing on an exemption he earned as the 2012 Assistant Pro of the Year in Indiana. Bembenick didn’t get down when all was going to hell with his game, he just kept his head up and kept playing (shitty) all the way to the end.

After an opening round 89 Bembenick dared to show up again on Friday hoping for better things on the course. As you know, it only got much worse and he ended up signing for a 103 to finish 36 holes at 48 over par. His second round included two pars, six bogeys, six double bogeys, three triple bogeys and a quadruple bogey on the final hole. He explained that his position as a role model kept him from withdrawing during the round. Listen up, Michelle.

As Michael told the Golf Channel, “I think it’s important to lead by example and show the youth that no matter how bad you play, it’s important to finish.” He also noted that, “no one likes to see a quitter. I know none of the members at my club or any students that I teach would want to see me quit.” That’s quite a contrast from Ms. Wie’s approach.

There’s a downside to Bembenick’s approach too. At some point his hacking around was likely a distraction to his playing partners who are trying to make a living playing this game. I give him credit for showing up and competing until the end, and I wasn’t there to see if his shit-show did become a distraction, but there is most definitely a fine line to walk in a situation like this.

I’ve lost count of the amount of 36 hole qualifiers I’ve played in where I’ve been out of contention by the 2nd 18. I can tell you that I’ve never quit. Even just two years ago when I made an 8 and a 9 on the same nine holes, I suffered through the misery of the last handful of holes and signed my card. I’m far from perfect, I hate to stand on a soapbox, but I can’t comprehend Wie’s attitude on this. This isn’t a one shot deal either. She likely leads the LPGA in WDs. She also quit once just to avoid the LPGA’s 88 rule.

Michelle Wie’s approach clearly is on the wrong end of the spectrum in my book. Yet if I was Bembenick’s playing partner I might have hoped he’d quit. And as I write this I hear Stacy Lewis on in the background talking to David Feherty about how she knows every time she tees it up she’s inspiring a kid to chase their dream like she did. There’s someone who gets it.

Am I wrong on this? Speak your mind. Leave a comment and vote in the poll. I’m wrong a lot. Ask my wife.

9 Responses to Rehab Is For Quitters