Built on property once owned by the founder of General Motors and Detroit Mafia families, Forest Dunes was born into existence in 2002.  Designed by major champion Tom Weiskopf, the (appropriately named) course will take you on a journey through the hardwoods, pines, and natural sand dunes of Northern Michigan that you’ll never forget. 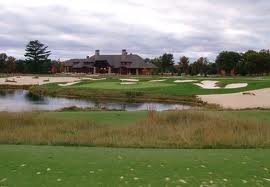 Where is Roscommon, Michigan you might ask? Well, it’s absolutely in the middle of nowhere. Roscommon has one stop light and one watering hole that you can find a drink in, but that’s part of the beauty of Forest Dunes, you’ll just have to trust me on this one.

As you sojourn to the course through Northern Michigan you begin to get a feel for the setting of your upcoming round. You’ll see hints of dense forest and sand dunes along the way, but just as you near the property you drive through a burnt out area that has been purposely scorched by man. This area makes you feel as though you’ve left Earth and landed on Mars. Fear not, it’s merely an area that has been reserved for birdies, specifically, the Kirtland Warbler.

Apparently the little guys were about to die off, so the Michigan DNR created a habitat for them. No shit. I think I actually learned that in 7th grade science class. Birds (not birdies) aside, once you clear the Mars mission and slide by the Forest Dunes guard house you begin to get a glimpse of the spectacular property you’re about to play 19 holes on. The club house and brand new lodge are eye popping. On top of that, a large part of the golf course becomes apparent to you as you gaze past the impressive structures. The lake around the 9th and 18th greens divides the course for you while the sand dunes and tall trees frame it.

The routing of the course is as spectacular as you’d think it would be in this setting and the mix of holes is just about right. In fact, I think that’s one of Weiskopf’s real strengths. He won’t make you pound away at long par 4s all day. He gives you some reachable par 5s, some risky par 3s, and a drive-able par 4 in most of his layouts and he’s followed the formula here too. There is no short changing this characteristic of the course.

I’ve probably played Forest Dunes about once a year for the last 5 to 7 years. In May the course is good, but hasn’t fully had the time to heal from the harsh winters the area regularly has. In June, it’s almost there, but not as good as it’ll be in July, August, or September. Even in the fall, this place is typically just tits. It’s hard to ever complain about it, but this year the greens were just a bit off when I played. Give it a month. They had snow in May. When I played in June there were probably still rolling at about a 10. That’s slow here. I’ve played them at 12.5. I’d guess they are usually well over 11 on the Stimp meter.

The rest of the course is always impeccable. The bunkers are perfect and there is hardly a blade of grass out of place. You might see an unraked waste bunker, but are waste bunkers supposed to be raked? No. Don’t hit it there. The course doesn’t get slammed with constant play, so the fairways and tee boxes are perfectly manicured too.

What makes the course conditions even better is the fact that the superintendent here knows what he’s doing. By that I mean that he doesn’t over-water the course like so many others do. The fairways will allow your tee shot to run out like you’d expect them to, yet they’re not even close to dry or brown. The greens are similar. They’re not firm or hard, but they receive well struck shots from the fairway properly while shots from the rough release some. That’s what a properly conditioned course should do.

Forest Dunes hits you with a price tag of $149 in the peak season for their rack rate. If this course were in a major metro area, I’d say that’s right on. For being where it is, it’s a little high, but still worth it. The rate includes your cart and range balls before you play. You can play for $89 once the twilight rate begins. FD also has fall and spring rates that are much lower. I warned you about spring conditioning above, so if you’re thrifty hold out for the fall rate or twilight. There is plenty of sunlight in Northern Michigan during the summer to get a round in even starting near 5 pm.  If you join their email list the course will send you notices of stay and play specials and packages that also make the green fee more affordable.

Below average. This is truly the one knock I have of Forest Dunes. The times I’ve been there have all pretty much gone the same way. Let me clarify this first. The people in the proshop have been phenomenal. Those are the golf people. They know their business and they’ll treat you like a king. The rest of the staff, I question what they’re being trained to do. We played as a twosome, so I knew the round would be slow, but 5 hours for a round is asinine anywhere. Did the ranger do anything to speed it up? No. We did receive a visit from an assistant pro on a tee before we made the turn. It was a good effort to appease the angry golfer, but it didn’t change anything.

The beverage cart and bar service…….I didn’t see anyone on a beverage cart. How the fuck can that happen when the golf course is packed? The bar and grill staff at the turn told me they didn’t have any prepared food other than candy and granola bars because they started serving dinner in the clubhouse. Get the fuck out of here. That’s insane when the course has as many groups on it making the turn as it did at that time.

Having a Rolls-Royce golf course will get people there, but the customer service being a Ford Pinto once you’re on the course is sure to not make someone come back. There are plenty of other options in Northern Michigan competing for that same dollar.

The Forest Dunes clubhouse and facilities include everything you’d expect and likely want and the building itself is impressive to view. I have not dined in the restaurant, but I’ve heard good things and will likely give it a try the next time I visit. The new lodge looks great. It likely has about 10 to 15 rooms in it with a few of them having cool views of the lake next to the first hole. The others might have views of the clubhouse and 18th green, but I didn’t look that closely. The practice facility is one of the best you’ll ever see anywhere. The greens match the speed and contours that you’ll face on the course. The short game area is so much fun I could spend/have spent all day there with nothing but a smile on my face. There is no caddie program, which is disappointing because the course would be a great walk, but there’s no community to pull loopers from. You’d have better luck getting a local elk to tote your bag.

What Forest Dunes does have in ‘extras’ is a Bye Hole that you play after the 18th to settle bets. It’s about a 105 yard par 3 with a large bunker in the center of the green to make things interesting. There is water short that should not come in to play. Here’s where I think they need more. Screw the Bye Hole, make 8 more like that. Give us a Par 3 course to go play after our round or a natural grass putting or short game course. They’ve built the lodge so they want you to come and play, but is the current 19 hole facility enough? It probably is, but it won’t bring you back over and over unless you’re playing elsewhere on your trip. I have heard a rumor that Tom Doak might be doing a 2nd 18 here. Stay tuned.

I don’t think Forest Dunes plays as hard as it is rated, unless the wind comes up (which it can on the more open and exposed holes). I play it from the tips (7100 yards) and the course rating is about 75.5 with a 140 slope. That indicates it should be difficult, but I’m telling you it’s quite playable. There are some relatively short holes that the average golfer will have scoring opportunities on. There are not a great deal of long par 4s. If you miss the fairway or blow one way out of the ball park you can often find your ball and play it from a dune or natural area. The greens are fair and roll true. They don’t trick you. Once you get the speed you can make a few putts.

Weiskopf’s fairways aren’t too narrow and often provide some larger landing areas. Where you will find some difficulty is when you are out of position. It’s not that being out of position will cause a big number, but it will likely lead to a bogey. You’ll get above the hole and 3 putt or miss short side and have no real shot at getting up and down. I think that’s more than fair and is also a job well done by an architect. All of that together makes a fair, challenging, and enjoyable golf course to play.

As always, I’m not rating difficulty on 5 being “way too damn hard”. I’m rating a course a 5 when I’d say it’s playable and enjoyable, but not easy, for players of all levels.

Forest Dunes is worth the trip for any golf nut or course hunter out there. The setting and course conditions alone make it a must play. Even with the shitty service I received on my last round there, I’ll be back when I next visit Northern Michigan. It’s too good to pass up.

Want more Forest Dunes talk and pictures? Visit our friend the Itinerant Golfer for his review.