Rosie Palms And Her Blister Sisters

Epic win for Justin Rose on Sunday at the 2013 U.S. Open hosted by Merion. Before you come out and tell me that Phil choked this away, I’ll tell you that Rose won it. Rose made the fewest errors on Sunday at the U.S. fucking Open. That’s what that day is all about. See  ‘Simpson, Webb 2012’. It does seem clear that there is less pressure on the players that aren’t in the final group on Sunday. They know they have to chase down the leader and let it all hang out. Rose did that early and then hung on for dear life. Last fall’s Ryder Cup was a foreshadowing of what we saw today. Remember the singles match between Rose and Phil? NBC was even clued into that nugget as they showed Rosie’s bombs that managed to take Phil out when he had a 2 up lead at Medinah with four to play. The only difference today was that they weren’t playing in the same group.

As for Rose, this has been a long time coming. When he holed out on 18 and appeared to have won the championship I couldn’t help but immediately think of Adam Scott and how both were seen as phenoms so early in their careers and both took a while to finally deliver. Rose of course went on to mention that Scott’s Masters victory this spring had an influence on him and that Scott had even sent him a text to encourage him. That shouldn’t surprise anyone and goes to show the strong character of both players.

What’s that? You’re still not convinced on Mrs. Rose? Here’s a mini-gallery for you to get your fap on, fucking sicko….. 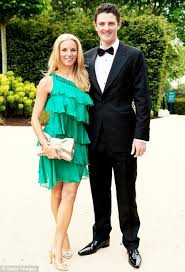 Phil’s early double bogies might be looked upon as the beginning of the end for his run at this championship, but don’t forget that he jumped back up to a 1 shot lead with 8 holes to play after his hole out at 10.

My eyes bugged out of my head just like Phil’s in the reaction shot when that happened. I’ve predicted all week that Phil wouldn’t win, that he’d break our hearts and his by finishing 2nd, but after that shot it seemed as though good fortune was now on his side. When the rain came down and Rose was shanking it out of the greenside bunker up ahead it seemed like Phil had two hands on the wheel.

Jason Day was lurking and Mahan still had a chance, but was either a threat? Mahan’s short game is just putrid once any type of serious pressure is put upon him. His demise was a lock. Day’s U.S. Open charge was quite similar to his 2013 Masters. He did just enough to be right there in the end, and missed a enough short putts to cost himself the title.

How could Phil lose this? It wasn’t easy, but he straight-up-butchered two easy wedge shots at 13 and 15 to make bogies where he should have had birdie opportunities. Pars on those two holes have he and Rose playing on Monday for the trophy. Phil admitted to TGC’s Steve Sands that those two shots were the difference and that his failure to execute them made this loss hard to take.

Justin Rose – The winner is always the biggest winner, that goes without saying, but just like Adam Scott at Augusta, this is a big breakthrough for a major talent. Plus, Rose closed this thing with clutch ball striking and great touch around the greens on 17 and 18. Onions! NBC also pointed out that Rose was +4 through 7 holes on Thursday and finished -3 for the last 65 holes. That’s tough to beat at the U.S. Open.

It wouldn’t shock anyone if Rose or Scott posted a victory at Muirfield next month. And why didn’t more people predict a Rose win? He’d already posted a win across town at Aronimink. He’s come along way from being on my ‘Losers’ list after the Masters.

Merion – Quaint, quirky, or queer…..whatever Q word you want to use to describe it, it doesn’t matter. Merion showed that you can dust this old broad off and still make her look good for four days in June. For that reason, along with her place in history, the USGA has to go back. It might not be soon, but I’ll guess by 2025, and we’ll all be juiced when the announcement is made.

Would +10 have been the winning score if the course wasn’t soaked? I’d love to find out. Kudos to the members and the community for putting on a great tournament. Philly fans clearly love their golf.

The USGA –  This really should read, ‘Mike Davis’. I’m pretty sure that ex-chief, David Fay, was the guy who had the nuts to actually give the 2013 open to Merion, but it’s Davis’ ability to set up a course for a championship that makes it all happen. Davis and his staff looked like they were going to get caught with a dick in their ass this week when Mother Nature took a literal dump on them with 7 inches of rain right before play began, yet the course still withstood the bombers and the modern ball to produce an over-par champion. That’s all those dandruff covered blue coats can ask for.

Jason Day–  Off the top of my head, I believe this is Day’s 4th top five finish in a major in the last 2 years. If you’re scoring at home, that’s 4 of the last 10 played. He has to know he’s on the verge and seems to rise to the occasion for the big events. I think what Day might need to get over the hump is a regular tour win. He hasn’t won in 3 years. He needs to remember how to close out a tournament again before he can win a biggie.

Short Putters – All this talk of anchor bans, anchored putters winning majors, etc., and the USGA has to be just tickled to see a player win with a standard length traditional putter. In fact, no anchored or broom stick putters were even in contention this week. Hmmm…….that’s weird….. I thought they were an advantage.

Bitch Tits – I hate to keep picking on Phil. He didn’t choke this away, but he did lose it via the wedge shots I mentioned above. I’ll just keep it simple and give him a bit of a pass because he lost to a guy that played better, he lost graciously, and it’s his birthday. Bitch Tits Tax O-Meter updated to add the $431,584.48 he’ll pay in taxes for winning $696,104 for the week. Better luck next year FIGJAM.

Tiger – When you’re the heavy favorite, number 1 in the world, and don’t contend on Sunday you earn your spot on this part of the list. He drove it crooked, he putted shitty, and his short game was that of a weekend hack at times. Other Sean Foley pupils like Mahan and Rose are near the top of the leaderboard and World No. 1 is chopping it around a golf course that is 6900 yards? Something isn’t right. He’ll go back to the drawing board after this. The results should be interesting to see at Congressional in a few weeks.

Sergio  – He also chopped it around and played like a hack, but he’s almost expected to do so. He makes the list because when it did come time to apologize to Tiger he left a note in his locker. That’s a pretty faggy way to say you’re sorry. They shook hands on the range during practice rounds, why no apology then? Sergio also made a 10 on the par four 14th on Saturday. Double figure holes will get you on this list almost every time.

Billy Horshel And Ralph Lauren – Ralph made them, so he’s fucktard for that. Billy wore them, which might be the bigger crime committed here. Uhhh??? You didn’t notice them? Are you fucking blind?

Yeah, that’s right. He wore pants with octopi printed on them. A few of the readers here picked up on this and commented in the previous thread. I saw them in his wardrobe preview provided by RL early in the week. I vomited a little and tried to forget about the visual. Billy had a great week even though he faded on Sunday. It was only his 2nd major and first as a pro, but these pants are unforgivable. I hope he learned a lesson.

Luuuuuuuuke – According to NBC, Luke Donald has now played in 40 majors without a victory. Who would have thought Rose would get one before Luke and Lee Westwood for the Brits. Luke’s major flaw is his length and that might be too much to over come to ever win a major. With Merion being a shorter course this might have been his best chance. Fear not Luke fans, Phil didn’t win won until well past his 40th major start.

No, not Phil’s. I already showed you that. Phil’s was neat, but under 100 yard hole outs are common on tour. Shawn Stefani’s Sunday ace was phenomenal because he missed the green and got the bounce of a lifetime. Even better, his reaction to the ball finding the cup:

All in all, NBC was fine when it counted, late on Sunday. The coverage of the contenders/leaders over the weekend was great, but as a reader pointed out in the comments of a previous post, their pre-coverage flat out blows:

The first hour of coverage on NBC today has been complete and utter bullshit. I skipped playing this morning because I wanted to watch the whole Open live (none of this DVR nonsense). Now I feel like an idiot. I would’ve missed absolutely nothing. It’s worse than the Super Bowl pre-game, and there’s not enough liquor in the universe to get me through that.

I should’ve known – NBC always does ridiculous puff pieces during their sports telecasts.

I couldn’t have summed it up better myself. Folks, there’s just no reason to do that to yourselves. If you have the coverage from before the leaders tee off on in the background, fine. If you’re expecting something more than what The Duck of Death (English translation) described above you might as well just put your genitals in a meat grinder and call it good.

And Johnny???? Well, we know what we’re getting with him too.

As I’ve said before, the problem with Miller is when he’s given too much air time. He says whatever is bumbling about in his head and NBC has no way to filter it. No, he’s not going to swear. He’s a Mormon who believes in magic underwear and secret tablets. They don’t have to filter him for that. What I mean is, they don’t have enough other voices to lean on for strong opinions and/or analysis. Gary Koch is great at that, but for some reason the producers don’t give him the chance to speak his mind like Miller gets.

Next year they U.S. Open moves to North Carolina and Pinehurst as part of a double header with the Women’s championship. Color me unexcited for that clusterfuck. It will be a different version of the Ross classic than we’ve become accustom to seeing (1999 and 2005 host) because Ben Crenshaw has restored it to what Ross had intended it to be like when he laid it out eons ago. Perhaps in a years time I’ll talk myself into appreciating the 2014 version as much as I did the 2013 edition that we just watched.