Saturday (Not A Lot Of), Moving Day

Did anything really change from Friday to Saturday evening? Not if you ask me. Tiger and Rory shot their way out of this with shitty rounds. But most of the field with a chance to win held their position and still has an opportunity to bring home some hardware on Sunday.

The poll results from yesterday were interesting. Tiger was out early as the winner according to you guys. As the day progressed you came to your senses and evened out with people selecting Phil. I picked Stricker and still think he could get it done.

The USGA told the media the course was set up yesterday for scoring, yet besides a few forward tees that allowed players to drive greens, the 3rd round was a blood bath. The 18th hole is something else. It makes some old open haunts like the 18th at Oakland Hills look tame. The green is almost unfair when you think of what a long yardage you have for your 2nd shot. A par there late by a leader could be all that’s needed to win. I predict it does not yield a birdie the whole weekend unless the tee is forward for round 4.

There’s no other way to say it. We’re all expecting him to win, but at the same time, we almost expect some sort of Winged Foot moment that costs him the title. As noted above, 18 is a severe challenge. Phil played two 4 woods to the green yesterday and still made 5 even with two great strikes. If he standing on the 72nd tee on Sunday evening, sun fading under the tree line, dusk imminent, with a 1 shot lead, I’m not sure I’ll be able to watch for fear of the oncoming train wreck. It’s clear the Philly fans love him from the roar he received on 17 after his birdie putt dropped. The pairing he has with Hunter Mahan should also help. Those two are buddies.

Happy Father’s Day to all the dad’s that read my dribble. If you’re not a dad, call yours and wish him well on his day. Golf and Father’s Day have always gone hand in hand in my family. I can recount many rounds with dad on the 3rd June Sunday. I also remember sitting near the 18th green at a U.S. Open watching my hero choke the tournament away as a journeyman pro won his only major. Ugh. 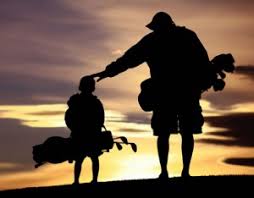 Whatever you’re doing to celebrate, make the most of it and enjoy the open coverage. Oh, and be sure to drop a comment if you got a great gift. When I returned home from a week of travel on Thursday, my FD gift was waiting for me in the mancave….. a brand new leather recliner…..I’m getting old.