Whoa, wait a second. You mother fuckers thought I was bailing on you for the week of a major? You can’t get rid of me that easily. And no, I wasn’t the guy at Merion heckling Sergio today. I would only do that to Vijay. When we had golf today is was pretty good to watch, and so far, it’s yielding a pretty nice leaderboard.

Oh, just a typical 30 hours for Phil. Practice at Merion, fly home to California, attend and celebrate daughter’s 8th grade graduation, fly back to Philly and tee it up on little to no sleep in the open. Then what? Yeah, a fucking rain delay before he could finish 5 holes. Three and a half hours later and Phil’s back on the course making red numbers.

Is this the same offspring that was mind fucking Phil from the womb when he lost to Payne Stewart at Pinehurst in 1999? It has to be given the time frame. Come on kid!!!!! Can’t you stay out of your father’s way to win an open. Phil ended his day at -3 under and at the top of the leaderboard (Donald at -4 isn’t finished with his round). Amazing when you think about what he did in that time frame.

ESPN reported that he took a nap in the clubhouse library during the delay. His (tee time) draw already has provided some luck in his favor. First the nap, but he is also fortunate to get his round in and get plenty of rest for tomorrow. Meanwhile, guys like Tiger and Rory had to wait all day just to play and get bonus golf early tomorrow morning. I ended up picking Phillip in phantasy golf, not because I think he’ll win, merely because I don’t know who will and Phil’s 2nd place points are valuable.

If you watched any coverage of round 1 on Thursday you probably saw something about the Champion’s Dinner hosted by the USGA at Merion earlier this week. 27 of the living 36 champs made it, including some current tour players that aren’t in this year’s field. Oddly, Jack didn’t make it because he couldn’t delay his trip to China 1 extra fucking day.

I’m not sure what to make of this. It seems as though there are enough of these types of dinners. Augusta has the patent on it and why the USGA would try to copy it I haven’t a clue. Yet it ends up being a neat little bit of history with each year they have one. It also has the ability to produce interweb gold like this:

That picture tells us a lot. Does Tiger genuinely like Rory? Yes. Does Tiger bully people? Yes. Are Lee Janzen and Webb Simpson scared shitless that they’ll get the next bif? You bet your ass.

Speaking of TW, he didn’t get in much golf today as noted above. He’s +2 thru ten and might even be playing with a slight injury. I think it is a nerve in his elbow that gets irritated when he has to play from the rough or mishits a shot. I’m sure some Advil will help him out tonight and he’ll be good to go tomorrow, but it’s something to watch.

All that storm hype (DERECHO COMING, WORLD ENDING!!!!!!!!) and what really happened? The course got some extra rain, the field staff took care of their shit, and we waited a few hours for our golf to start again. Yeah, it sucked, but it could have been worse.

There’s a chance of a storm/shower again tomorrow for the Philly area, but there will also be some wind that will help to dry out the course. Two nice days in the 80s are coming for the weekend and by Sunday the track should be dry and showing more teeth. I think it held it’s own on Thursday even though it was moist. The USGA has made the fairways so narrow that most players only hit a few drivers. Course set up and no roll makes Merion play just as long as any other championship venue. I don’t want to hear about the lack of length at Merion any more. If you’re talking about length and yardage you’re not paying attention.

I wasn’t sure how I’d react to to the wickers atop the pins until I saw them. I have to admit, they’re perfect for such a quirky golf course and I’m glad the club insisted on keeping them. The first pic above is from a practice round when Sergio’s ball flew into the wicker and stuck. The local rule for that situation is to place the ball one inch from the cup. Have no fear, Tiger! Take dead aim at the wickers!!!!

A Root Canal For Your Ears

That’s what listening to Chris Berman call golf on ESPN is like. Berman’s random musings and cliche’ nicknames are 15 to 20 years past their usefulness. Yet some fucking suit at the World Wide Leader let’s him make his own schedule and call his own shots. My god is it awful, but, we only get more of him when there are rain delays or some other type of distraction to take us away from the golf Zinger and Mike Tirico are covering. I don’t mind ESPN’s crew. North is fine, Strange is a poor man’s Johnny Miller, Judy is a pro, and Zinger does his thing. Just put Berman out to pasture, please. If they don’t I might end up breaking my TV tomorrow.

The picture above is the one time Berman has been useful to anyone at Merion this week. He helped push a production van of his employer out of the mud. Too bad he didn’t stick the tailpipe in his mouth. Notice the love handles and back sweat.

When Steve Stricker (playing with Bitch Tits) found his tee shot on the par 3 third hole behind a tree/under a shrub he had no chance to play it and was forced to take a stroke penalty for an unplayable lie once the rules official determined it was not in the bunker (take notes Dustin Johnson). Steve walked to the green from that location a few times to see what he had to work with. He then took his drop and played the hole out making a double bogey. Some time after that a viewer called the USGA to tell them Steve committed a penalty. The viewer exclaimed that Stricker’s pacing to the green trampled down the rough he dropped in to give him an advantage. 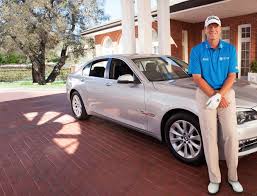 Go fuck yourself TV-call-in-guy.  You think you know something? Stricker didn’t intend to do anything other than survey the green. The USGA agreed because you can’t penalize someone without knowing their intention. Case closed. Don’t fuck with Strick. He’s a savage.