What Do Tiger Woods And Kid Rock Have In Common?

Tiger Woods and Kid Rock appear to have become besties after their time hanging out together this year at Tiger Jam. If you’re not familiar with Tiger Jam, it’s some charity bullshit that benefits the Tiger Woods’ Foundation. In other words, a big celeb party/orgy in Vegas that allows Tiger to skip most of the PGA Tour events between the Masters and the Players. This year Tiger got in some golf around his jam in the desert with Chris Paul and Bob Ritchie …….errrr….. Kid Rock.

and of course Pamela Anderson, who he was engaged to.

Devon James is another (no relation)…. 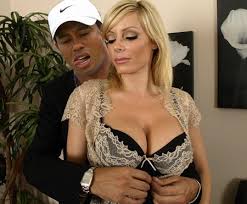 What did we learn from this? Rock stars pull hotter ass than golfers. Tiger’s conquests all look hit. After closer examination I can’t believe he ended his marriage over these skanks. Bob Ritchie? He’s just having a good time, but he’s lucky he didn’t marry the P.E.T.A whore and get hepatitis from her.

Back To Regularly Scheduled Golf Programming

You want more Tiger? Who doesn’t. Rumors are flying around the Twittersphere about Nike and Tiger being close to signing a new deal that will pay Woods $40 million per year. There was talk that he felt $woosh should have re-upped sooner and that Stiney was shopping around for deals. There’s other rumors that the late Phil Knight…….huh…..he’s not dead yet? Oh yeah, fuck it, my bad……..that Phil Knight didn’t want to see Tiger break Jack’s major record with a Taylormade hat on. Either way, Nike’s going to get there guy for what looks like at least another decade. Last night Jimmy Kimmel made mention of the story on his show and gave us a glimpse of the new $woosh campaign for TW.

I mentioned in my previous post how Golf’s Longest Day (*TGC trademark) on Monday would provide us with some great drama and stories from the U.S. Open Sectional Qualifying tournaments being played around the country. I was engrossed in it and the day certainly lived up to the hype.

I doubt you recognize any of the three golfers above just from the head shots I’ve provided you. On the far right is Scott Stallings who has once twice on the PGA Tour in his career and finished in the top 5 the last two weeks. He’s even mentioned in the previous post on this site. He wasn’t exempt from U.S. Open qualifying and played 36 holes on Monday in Memphis after he played Sunday in Columbus at the Memorial. Scott finished tied for the last spot in his qualifier and lost a 3 player for 2 spots playoff.

In the middle is Derek Ernst. He’s a tour rookie that won at Quail Hollow a month ago. His win in Charlotte punched his ticket to the 2014 Masters, but he had to play 36 holes on Monday to qualify for the open at Merion next week. He didn’t make it.

On the left is Randy Hutchison. Randy is a mini-tour player who’s played in 3 PGA Tour events in his life in four years as a professional. Randy kicked ass and took names by shooting 9 under and earning co-medalist honors at the Rockville, Maryland Sectional on Monday. He’s in the open at Merion while the tour players noted above, and several others, are not.

That’s the beauty of the open. It’s the most democratic golf tournament on earth. It gives the little guy a chance. It lets us all dream. Congrats to Randy on his accomplishment. Good luck at Merion.

(Editor’s Note: Senior U.S. Open Champion Roger Chapman withdrew from the U.S. Open just a few hours ago allowing an alternate into the field. That alternate is Scott Stallings mentioned above.)

Tour pro Scott Gardiner of Australia showed up on Monday in Columbus to attempt to qualify at that sectional for the open. He had a problem. His clubs weren’t there. Gardiner asked the shop staff for assistance in getting him some wrenches and one of the assistant pros came to the rescue. 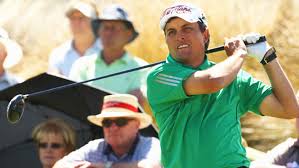 The ass pro let Gardiner use his irons, wedges, and driver that were close to his specs. Luckily for Gardiner they noticed that the wedges didn’t conform with the USGA’s latest groove rule before he teed off. No problem, put some new wedges and a putter on his tab. Gardiner went out in the morning and fired a 7 under 65, but ran out of gas and closed with a 74 to miss qualifying by several shots.

That really makes you wonder why we’ve all been so hung up on Rory’s equipment change for the last 6 months. These guys are just that good. They can play with anything.

And finally we have our saddest story from Monday. Sam Saunders, Arnold Palmer’s grandson, is a struggling tour pro that has been invited on sponsors exemptions (thanks grandpa!) to several tour events and nary made a dime in the process. Saunders had it under par and was playing well at the Maryland site. At some point in his round he lagged a putt to four inches and had a gigantic brain fart. HE MISSED THE 4 INCH PUTT!!!!!!! 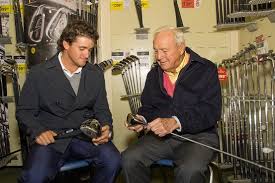 You think that came back to bite him? Of course it did. He finished right on the number and lost a 3 for 1 playoff and then lost the 1st alternate spot to the other ‘loser’. About 10 guys would have to pull out of Merion now for him to get in.

But hey, at least he doesn’t have to play out of that cabbage. That pic was tweeted by Justin Rose’s caddie yesterday. Needless to say there’s going to be some carnage for the guys missing the fairways next week.