I’ve Probably Said Worse When I Was Drunk

Not racially, but I’ve offended more people when I’m drinking than there are fish in the ocean. However, being wasted doesn’t excuse Sergio from his recent fuck up. By now I’m sure you’ve all heard about his offer to host Tiger Woods for a dinner of fried chicken. Sergio said this while hammered at a pre-tournament function for this week’s BMW event at Wentworth. The problem with the statement is that he said it in public and he’s a public figure. Guys say things of this nature or worse to each other all the time.

You have a friend who’s name ends in ‘ski’, I’d bet a paycheck you’ve called him a Polack. If they weren’t already feuding and Sergio said this to TW’s face on the range or walking off the green, my guess is that TW smiles and wet Willy’s Garcia in the ear or jabs him in the ribs and its over.

If Woods told you Y.E. Yang was good at math or that Ernie Els can’t jump would you be offended? No fucking way. Sergio isn’t a racist and his apology seemed to really shake him. I think he genuinely said this without evening realizing what slipped out. I can’t believe some of these pussy journos are calling for the tour to suspend him. Get real. Remember what Fuzzy said? That was far worse, mostly due to him saying “they” and throwing in some collard green references too. Was Frank Urban Zoeller suspended for his actions? Nope. People fuck up, people forget where the line is. If they apologize sincerely, move on.

Everybody is way too sensitive about this shit….

The on going feud with Tiger is what’s really made him look bad. People were just about over Garcia being a spoiled ass cry baby faggot that spit in the hole after putting out a few years ago. He’d become somewhat of a sympathetic figure when he lost his game took a leave of absence from professional golf. Winning last year on tour and returning to contention in the big events had paved the way for what could almost have been a feel good story. Not now, first the bullshit at the Players, now this.

I’ve moved on and so will you, but the stain isn’t coming off him. If only he’d offered Tiger grilled chicken.

In 2003 Martha Burke and her rug munching feminist group camped outside of Augusta National during the Masters to protest the fact that women were not yet allowed to be members of the all-male club. Hi Martha…..Iron My Shirt!!!!

A decade has passed and just this year ANGC admitted two female members. In May of 2003 Annika Sorenstam was granted a sponsors invite to compete in the Colonial Invitational against the men. She didn’t break par, didn’t make the cut, and was dead last in driving distance for the week. But she did beat a few fellas and the media had us believing that this was only the beginning. They told us Annika and other strong players from the women’s tour would soon be making money and be competing on a level playing field with their male counterparts. Most likely, Michelle Wie would challange Tiger Woods for most majors!!!!!! 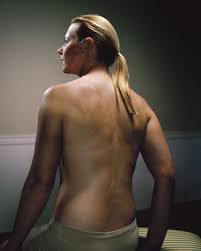 You remember that hyperbole? PHHHHHHHHHTTTTTTTT! Like a queef in grandma’s sleep (slipped through the cracks rather silently after much build up). Hey, I’m glad she tried. I thought it was great for the game. It’s the folks that took it up a level that made the whole thing a laughable circus in the first place. That’s got nothing to do with Sorenstam.

And my boy Vijay, remember what he said? He was pissed she took a male’s spot. He said he wouldn’t be paired with her, but if he was, he’d withdraw. You see, he was a prick ten years ago too. Failed hyperbole or whatever, it’s fun to look back on a historic week in Texas a decade later with 20/20 hindsight.

For one of the few times all year the better field is across the pond playing in the UK. With the big name Euros and a few other international stars playing Wentworth and a less notable field at Colonial, which one will you watch?

Both golf courses are classics, but the face lift Ernie Els gave Wentworth a few years back has changed it mostly for the worse according to the players. I like what Els did dto the track. It makes the finish more exciting. I’m sure I’ll watch plenty of both tournaments, if my free time allows, but I’m probably more interested in Wentworth just to see how Sergio Garcia bounces back from being the (negative) center of attention this week.

Dustin Johnson isn’t even playing at Colonial this week, but that doesn’t mean we can’t take a look at Paulina Gretzky’s latest WhoSay/Instagram/Twitpic. Unfortunately, WhoSay doesn’t make it easy to embed their images on this site. That’s ok, I’ll just show you an older one.

If you need more or want to see this pic of her fishing, click below.

Why did I have to show her????? I didn’t want to leave you or myself with that image of a naked Sorenstam as the burning image you see on this site today.