Did Keegan Choke Or Did Sang-Moon Win?

Sang-Moon Bae came out of the gates on Sunday and chased down Keegan Bradley like a puma chasing a zebra. But Moon’s hot start didn’t last and the 2nd year tour player’s game got a little loose in the middle of his round. On 9 he hit is hybrid off the tee a whole fairway over to his left and made double to let Bradley back in the game after having a 4 stroke lead. By the time Bradley’s birdie putt found the cup on 15 the two were tied with three to play. No one else in the field ever made a serious run at these two. 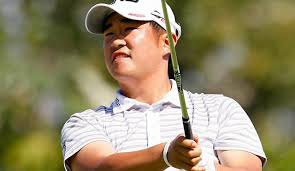 When Bae got up and down for birdie on 16 Bradley had an even shorter putt to make to again pull even. The putt rimmed out violently, Bradley went on to make bogey on their next hole, and Bae won by two. Bradley’s miss and subsequent bogey on 17 are what make me lean toward the verdict that he did choke this one away. An even par round in those blustery conditions shouldn’t in itself be the called choking, but ending the tournament 11 under after being 10 under in round 1 is just more evidence against you. A missed short putt and untimely bogey to go with it?

Bae’s win could be huge for his confidence. He’s won all around the world but this is his first win on American soil. He’s already played in the Masters, but this will go along way in getting him further into the Fed Ex playoffs and big money WGC events. I’ll be curious to see if this turns him into more than a 1 hit wonder or if he’ll just be another guy who won once on tour and was never heard from again. I remember thinking when Bradley won the Nelson in 2011 that he could just fade away in this manner. Yup….I’m pretty fucking clueless at times. 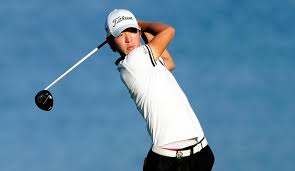 Perhaps you have noticed, but I’ll just guess you didn’t……the first 3 pictures in this post are different golfers of Asian descent. No, I’m not racist, I just find it hard to keep track of a few of the newer guys on tour. In no particular order I’ve showed you Sang-Moon Bae (Bay), Sueng Yol Noh (Song You’ll Know), and John Huh (a.k.a. Johnny Question Mark). From top to bottom, name them, without cheating. Get them right and you can call me a racist. Thanks for playing.

With the Nelson tournament being so lackluster it forced me to fill my golf on TV fix by checking out a fair amount of the Volvo Match Play event played in Bulgaria. The star of the show was the course, Gary Player’s newest design, Tharcian Cliffs. The Volvo event was the coming out party for this brand new course and Mr. Player didn’t disappoint. Just take a peak at some of the images:

It looks a bit like Whistling Straits on steroids, doesn’t it? I was stunned in just looking at this piece of property hanging over the cliff and bluffs it sits upon. Even more shocking was the fact that there was virtually no wind to speak of for the players to contend with during the weekend broadcasts. A course on the water at that kind of elevation should seemingly have 15-20 mph winds on it’s calmest of days.

What happens to the course after this weekend is anybody’s guess (as far as hosting professional golf). It would seem likely to host future European events, but can it ever host anything more high profile than the Volvo World Match Play? I can’t see the Ryder Cup jumping in to play matches at such a venue as it isn’t spectator friendly, but I’m looking forward to seeing more of the course when gets it’s next opportunity to host any world class tournament.

Coldsore In The Shitter

Remember that story I told you about Nicolas Colsaerts taking a piss in the middle of a few thousand people during his Friday afternoon Ryder Cup match at Medinah? Ironically the Belgian Bomber had no problem finding the restroom with his tee shot in his quarterfinal match over the weekend in Bulgaria.

The good folks at Deadspin have the whole story and video here. He didn’t actually hit is ball in the toilet. He flew it over the crapper into a hazard and the official determined his nearest point of relief was the rest area in the picture above. Bathroom humor and potty jokes ensued from the broadcast.

Will The Belly Be Banned?

Keegan Bradley using a belly putter to shoot 60 on Thursday made my skeptical mind figure it was all too planned by the USGA to hold a presser in a few days to announce their decision on the use of anchored putters. Bradley promptly showed the USGA blue coats that you can miss key putts even when using a cheater putter as he gave away the Byron Nelson on Sunday. Tomorrow before you take your coffee induced mid-morning shit the USGA will have announced their decision on these magic wands.

At this point I’m not sure what to expect. Usually some scribe or #twitternerd is out in front of this and breaking a bit of news before a presser actually happens. I think the Tour’s stance has caused the USGA to re-examine their original drop dead plans, yet the R&A isn’t taking shit from anybody on the issue. If I had to guess, I think they’ll uphold their plans to rid the world of such putters, but I could see some sort of exception or grandfathering being allowed. Don’t ask me how they’d do it, but it seems like the most fair resolution they could allow at this point with the least amount of backlash. May 21, 2013 will be an interesting day in golf history no matter what the decision is.

Usually in this spot I provide flippant comments about what the network covering the weekend tourney did right, wrong, or what they completely fucked up. That’s not happening this week. The golf world lost a loved one on Friday when Ken Venturi passed away. Ken was recently inducted into the World Golf Hall of Fame but could not attend the ceremonies due to illness. His long time friend and colleague Jim Nantz provided this video tribute at the induction.

Nantz flat out lost his shit when talking about Ken’s passing when CBS came on the air on Saturday. I’d love to pile on Nantz for it but I can’t. Venturi was like a 2nd father to him.

While Venturi hasn’t been on the air in over ten years, most of us have fond memories of listening to Ken call countless Sunday afternoons of our heroes hitting big shots, making clutch putts, and raising the trophy in victory. He was part of our golf culture and an icon in the game having won a U.S. Open, nearly won a Masters or two, and spent 35 years in the broadcast booth. 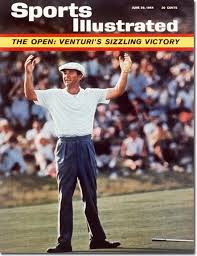 Venturi was a sporting legend and a veteran of our armed forces, but most of all, he was all class.

Ken is also famous for being part of The Match, as told by Mark Frost,

which details a 4 ball match played the week of the Crosby Clambake between Ben Hogan, Byron Nelson, Harvey Ward, and Venturi. Amateurs Venturi and Ward paired to shoot a best ball 59 on the famed Cypress Point layout only to lose to Hogan and Nelson in what’s been called the greatest golf match in history.

I found the timing of Venturi’s death, during the Nelson and the week before the Hogan (PGA Tour events), to be fitting and surreal. Somewhere up there Hogan, Venturi, and Nelson are replaying their match, and Venturi’s recently deceased long time CBS partner Pat Summeral is calling the action.