A week ago Derek Ernst was trying to decide between playing in the Web.com tour event in Athens, GA or sitting around Quail Hollow hoping to get in the Wells Fargo Championship as the 4th alternate. By the early part of the week enough guys in the big show had withdrawn due to the condition of the greens and Derek was on his way to Charlotte. A good week can change your life on the PGA Tour and that’s seemingly what happened when Ernst won the Well Fargo tourney in the slop, cold, and rain on Sunday defeating David (Poor Man’s Ian Poulter) Lynn in a one hole playoff.

Ernst, the former UNLV Rebel and 2012 Q-school grad, is playing the tour as a rookie this year. He’d struggled so much in his first 4 months that upon the reshuffle of status on tour he literally got lost in the shuffle, hence him being an alternate this week. CBS even told us the story of how he tried to save some cash by leaving his rental car in Georgia and having his caddie get a rental car in North Carolina to avoid the fee the car companies charge when you return a car in different state. Cute.

Ernst said in his post round presser that the 2 year tour exemption was the most meaningful perk of his performance today. Sure it is, a guy worried about rental car fees has to think that way. Yet next year he’ll be spending the first week of the year in Maui playing for a millions bucks against 30 some other guys with a guaranteed payday. 11 months from now he’ll be at Augusta competing in his first Masters. That two year exemption will be a complete afterthought by then.

Oh, who’s the broad in the pic? I have no clue. His girlfriend? That’s the only image of her and you can’t even tell if she’s remotely hot. If you’ve got a better pic or have some info clue me in so we can put it up for all to see/comment/compare. That’s what goes on here.

Choking On Their Dicks

Westwood, Chucky 3 Sticks, Bitch Tits, Ryan Moore, Watney……choking dogs. All of them. Look at the pedigree those guys have compared to David Lynn and Derek Ernst. Everybody had to deal with the rain and shit greens. These guys didn’t get it done. Ernst was the best ball striker I saw out there today. He was consistently ahead of the rest of the contenders off the tee and hitting it closer to the hole. His shots into 18 in regulation and sudden death were the best two shots CBS showed there all day. The kid showed onions when everyone else that isn’t Lynn showed fear.

Sure Lynn and Ernst had a little advantage playing the last few holes in chase mode instead of playing with the lead like Phil, but you still have to execute the shots. With Howell and Westwood, we can’t be surprised anymore when they do this. It is their nature. Think about this for a second…..today’s winner, Ernst, has 1 less win on the PGA Tour than BOTH Howell and Westwood.

Westwood turned 40 two weeks ago. Did he age 5 years in the process? It appears he did because he showed up at Quail Hollow with a head full of gray hair and a gray goatee. Compare Lee above to Lee below from the Masters just a few years ago. 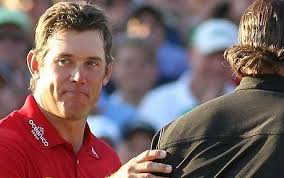 He either ran out of Just For Men or Monty telling him he won’t win a major now that he’s 40 has stressed him out something fierce.

Philly Mick lost this thing on Saturday when he played pinball with the gallery and blew a chance to distance himself from the field. If you weren’t watching, it was probably the most entertaining stretch of golf that aired on TV all week. On 15 Phil sprayed his tee shot well right and was near a cart path. He flailed at his 2nd shot, doubled crossed himself, and sent his Callaway out of bounds. After a long way for a ruling from dropping back on the cart path, Bitch Tits went right back to attempt the shot he had just airmailed off the property. On his reload he kept it in play, but making 7 on that birdie hole probably cost him the tourney.

The picture above is from the very next hole he played. His 8 iron from the fairway missed the green by about 15 feet on the right, but it came down on this poor patron’s head and bounced 50 yards away on to a tee box on the next hole. This was quite a scene. I think Phil left something signed for someone in the gallery on most of the back nine holes because he was spraying it everywhere. His short game kept saving him and he was still tied for the lead with Watney at the close of business on Saturday.

His failures on 15, 16, and 17 today were the final blows to sink his chances. He knows he let one slip away. To me this is just how Phil is, go for broke and let the chips fall, but it’s also another Grand Canyon sized difference between the two best players of the last 20 years in golf. Tiger closes the deal from the position Phil was in 99 out of 100 opportunities. Phil’s closing percentage is still pretty good, but Tiger is in a different world and when you step back and think about it/compare the two.

I didn’t get to watch the broadcast live, per usual, but it didn’t matter anyway today because no one did. The action was pre-recorded due to the tee times getting bumped up to avoid even more inclement weather than we saw in Charlotte. When this happens you really have to try to avoid the internet, your phone, twitter, etc. all day because somehow/someway you’ll get the breaking news of who won and how. I fucking hate it when that happens. Luckily for me, I was at Sesame Street Live with the little one and no one was talking about golf. Whew.

The good thing about the pre-recorded broadcast is CBS has a chance to edit their shit before they dump it on you. There’s much less down time and gee-awww-shucks to listen to from the crew. Tough to not see that as a better outcome. I particularly liked what Peter Kostis had to say about Watney’s hosel rocket from 17 tee on Saturday. Nantz and the boys were given some ugly to mediocre golf to show in some really nasty weather and they didn’t bat an eye.

Faldo gets a pat on the head for recalling how different 18 was playing from last year when Fowler hit a gap wedge from 120 yards to the green to make birdie. Sir Nick noted how the conditions had close to 100 yards of an impact on the range of tee shots from 2012 to 2013. What he forgot to mention was that the pin position made up about 25 of those yards (front edge last year, back edge this year). Kostis also gets another gold star for some of his breakdowns of Phil’s hacks and the quick analysis of Ernst’s heal-down/toe-up putting technique. Remember, Ernst missed a handful of short birdie putts during the round due to this flaw.

It’s officially Players Championship week now that we’ve closed the book at Quail Hollow. Hard to pick a favorite here, it feels like a horse race with 20 entries running wide. The Players boasts that it has the best field in golf. The course is quirky and some players despise it. I don’t buy it as a major, I might not even call it the 5th major, that’s all marketing shit. What do you think? 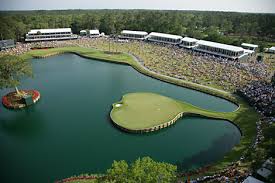 Speak your mind and submit a vote. I want to know. Is the Players worthy of being a major? Is the 5th major alias enough? Or is this just a Tim Finchem/Deane Beman/Pete Dye wet dream that’s never going to happen? More 5th major chatter coming later this week. Happy Cinco De Mayo!