Right now I’m guessing some of you are saying, “who the fuck is Doug Barron?” Doug is the first guy I can remember the PGA Tour suspending for violating their drug or doping rules. He was caught taking beta blockers and some testosterone pills. According to those in the know, plenty of guys on tour have used beta blockers to calm their nerves and adrenaline while playing. Barron was a nobody. The penalty imposed on him was done to make him an example. Essentially, Barron was going 35 mph in a 25 mph zone and got his license taken away. 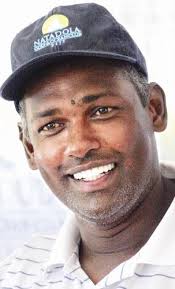 Meanwhile, mother-fucking-cock-sucker Vijay Singh takes a banned substance (deer jiz or whatever the fuck it was) and the dickless fucktards in Ponte Vedra just let him walk. Yes, I’ve made no attempt to hide my contempt for Vijay. Sure I’m being biased, but that doesn’t make the ruling from the tour today correct. In case you missed it, Commissioner Tim Finchem announced that Veeeeeeej would not be disciplined for being caught taking a banned substance. The excuse was that the substance is no longer banned by the World Anti-Doping Agency (WADA), so Vijay is cleared of any wrong doing. The Tour was going to suspend him when news of the violation broke 13 weeks ago. Singh appealed the suspension, the tour makes none of this shit public per their policies, WADA changes their list…….poof! Problem gone. How fucking convenient.

Nailing Barron for anything is akin to the NCAA banning Montana State from post season play for having an unsanctioned cheerleader sleepover while Duke basketball players receive thousands of dollars worth of jewelry and credit with no repercussions. One set of rules strictly enforced for little guys, bendable rules for the big dogs……… I guess that’s life.

Finchem gets so many things right when making decisions for the tour, but not this one. This is a complete whiff.

Monday was Media Day for the U.S. Open at Merion. Traditionally, the defending champ is at the site to answer questions, do PR for the USGA to the locals, and the media plays the course. That all went down, but Webb Simpson did his interview via Skype and only participated for about ten minutes when most champs typically go all day.

His reasoning for not attending Monday’s event was that with the tour’s next event being in Webb’s home town at Quail Hollow he declined the invitation to Merion to spend additional time with his young family at home. Sounds like a legit excuse, right? Could be, but there were plenty of round trip flights (90 minutes each way) from Charlotte, NC to Philly on Monday. He could have had breakfast and dinner at home while still being at Merion for the media. Enter the #twitternerds to start the conspiracy theories. There are some rumors going around that Webb’s absence on Monday was a bit of a ‘fuck you’ to the USGA. Why would he do this? Call it a passive aggressive way to let them know how he feels about their proposed ban on anchored putters. Can you blame him? If you won a few million bucks at a casino and they changed the rules of your favorite game, I don’t think you’d agree to be their spokesperson either.

Other than that media day at Merion was a snooze from the columns I’ve read. The course set up sounds like it’ll make the shortest Open course of the modern era a viewers delight. Webb himself even described the first 13 holes as birdie holes where most players will have wedges left for their approach shot and ample birdies will be made. Then the ‘back 5’ (as they’re calling it) will prison sex you like normal U.S. Open golf. Perfect. Birdiefest then trainwreck. I like it.

Nobody Wins With Excessive Top Dressing

Reports have been out for over a week now that the greens at this week’s tour stop, Quail Hollow, are a disaster. The tour staff doing prep work there weeks ago decided to top dress the greens for some reason and went a bit overboard. The excessive top dressing has caused the club to have to re-sod the four worst greens on the course. Players began pulling out of the event just at the suggestion that these greens were fucked. Tiger Woods has played here in most recent years unless he was injured. He announced last week he’d be skipping the event in 2013 because he needed his customary 3 weeks off after the Masters (Augusta came a week later than normal this year). Bullshit Tiger. I think he heard about the putting surfaces and said fuck it.

Ian Poulter has now withdrawn from the Well Fargo Championship at Quail Hollow citing personal reasons. Dustin Johnson is also out, but he’s claiming a sore left wrist. I joked on Twitter that it probably was sore due to Paulina Gretzky being 3 time zones away. I swear to god, she tweeted this pic below within two hours of him WD’ing. The man has priorities.

Jerk off arthritis or not, if the greens at Quail Hollow are as bad as we’re hearing, these guys have every right to withdraw. This is how they make their living. They’re supposed to get the best the course has to offer. On the surface it would appear they’re being pussies about it, but I’d have to imagine a bumpy green costing you 500k would piss you off something fierce.

Every once in a while this site hits a milestone that I feel I should share with you. This ball starting rolling very slowly just after the first of the year. Some momentum and a loyal group of readers began to show up and stop by regularly to read my mindless thoughts (mostly during their morning dumps from what I understand). Through March I was thoroughly impressed with how many of you kept coming back and how the audience grew. Then April happened, and the total number of visitors from all of the first 90 days more than doubled for the month.

It’s been exciting to watch and I thank each and every one of you for humoring me. Hopefully this stays fresh for you, entertains you, and provides you with some golf nuggets you didn’t already know. I’d also like to give you the chance to speak up. What would you like more of, less of, any changes I should make, etc.? Consider this an open suggestion box. Leave a comment and let me know what you think. Thanks again for your patronage.