Yeah, you know the clip.

Is it a stretch to call Billy Horschel the hottest player on tour? I don’t think so. He’s made the most consecutive cuts with his streak now well past 20. He’s been in the top ten of the last 4 events he’s entered (he was not in the field at the Masters). He also leads the tour in birdies for 2013. In summation, he’s playing out of his mind. 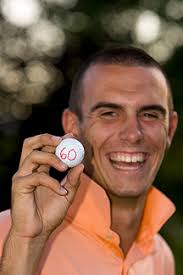 The former Florida Gator and 2007 Walker Cup team member notched his first tour win on Sunday in large part due to his 6 consecutive birdies in the middle of his round. Horschel played great and earned the victory but his win was aided by the fact that the 2nd and 3rd round leader, Lucas Glover, couldn’t sniff a birdie until he was nearly out of contention in the middle of the 4th round.

Billy Ho has more nervous energy than a virgin on prom night. He’s is an emotional player and is a total breath of fresh air from so many of the tour players that appear to not have a pulse. As his round moved deeper into the back 9 on Sunday he played faster and at times appeared to not even set his feet and hands still before he pulled the trigger on his shot or putting stroke. It was kinda fun to watch because you felt like he might explode at any moment. It’s similar to that nervous behavior your dog has right before it takes a shit, no?

To make matters worse for Billy, he was forced to sit through an hour or so delay after hitting his tee shot on 18 with a one shot lead. That probably wasn’t great for his nerves, but at least he’d already avoided the drink on his tee ball. In the end, Horschel had this 25 footer for the win.

He didn’t hold back there did he? It’s easy to see what a win means to a first timer on tour. He’s been knocking at the door for a month now and breaking through like this might lead to more victories. He won’t have an open date on his playing calender next year during Masters week.

When I was making my fantasy golf pick this week I felt like players that played well in Houston would also play well in New Orleans. It seemed logical due to the fact that they’re just a few weeks apart so those playing well at the Shell would likely still be here and the two courses are relatively similar. It was not surprise to see Horschel and D.A. Points right back on top of the Zurich leader board just like they were in Houston. Lucky for me, I went with Horschel over Points.  Unlucky for Points, my pick of a player didn’t jinx him for the first time in close to a year.

With Tianlang Guan making the cut but playing mostly off camera the story of the tourney outside of who would win it was the play Ken Looper. Looper is an absolute nobody when it comes to stature on the PGA Tour. He literally doesn’t exist. He has no picture when you click his name on any internet leader board. He’s not a tour member, can’t collect Fed Ex points, and had never previously played in a tour event.

Yet, here’s Looper (jock, pro jock) in contention on Sunday after Monday qualifying with a 62 earlier in the week. Looper is a local kid who told CBS he’d probably played the TPC course a few hundred times as a collegiate golfer. He’d also won a junior event on the same track. By the time he reached the 18th hole on Sunday he no longer had a chance to win the Zurich but a top ten finish loomed if he could make one last birdie. A top ten finish would have automatically sent him to the next event on the schedule per tour rules. Looper dashed his chances by rinsing his tee shot in the water hazard. He was forced to re-tee, and after finding the fairway on his third he’d be playing his fourth shot from the fairway some 240 yards from the hole. He nearly holed it, the shot lipped out. So close.

Another mailed in effort from CBS this week. They really aren’t near the top of their game when they give Feherty the week off, are they? Feherty’s wit and keen observations would have added so much if he’d been walking along side the Points/Horschel group down the stretch. Faldo seemed more interested in telling viewers how well he eats in the Big Easy during this week than talking about the golf being played. At least we still had Oosty. That man is my weekend-golf-on-TV-rock. He never lets me down.