My Mind Is Blown

And yours is about to be. Just when you didn’t think they could make you love the Masters and Augusta National more than you already do……….BOOM. In 2013 Augusta National Golf Club unveiled its super-duper-mother-fucking VIP room called Berckman’s Place. I don’t know how I didn’t hear about it during the actual Masters. It’s not as if it was well advertised. Golf.com’s Gary Van Sickle and GolfWeek’s Forecaddie (TMOF- The Man Out Front) both popped off feature stories this week on what is being called the greatest sports hospitality facility ever. 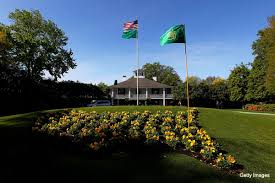 I remember being at Augusta in 2011 walking down the left side of hole 5 and seeing a large structure through the trees and hearing what sounded like construction noises. I just figured it was some part of the maintenance facility. But no, that was me walking by the future site of Masters-junkie Mecca and not even knowing it.

Yup, you heard me. You might never get to walk the fairways at ANGC, but if you have a ticket to Berckman’s you can pull a wand out and roll Masters logo Pro V1s all over 3 replica greens from the big course. From what I understand, they cut the holes on the replicas to mirror the hole locations in the tournament on that given day. The greens are just as undulating and as fast as the real things. The holes they imitate are 7, 14, and 16. Incredible.

Well sure I will, that’s what I’m here for. Berckman’s is named for the owner of the nursery that ANGC now sits upon. The facility debuted with a soft opening in April 2012 during the Masters to a much smaller select group. The Men of the Masters run the entire hospitality operation to the right of the 5th hole at ANGC. It isn’t easily seen from the course due to the dense woods surrounding it. The facility is only open during the 7 days of the Masters tournament (including practice rounds). An artist rendering of the facility is shown below.

There are four dining areas that serve different types of cuisines. Ike’s (Southern; named for former member, President Dwight D. Eisenhower), MacKenzie’s Pub (Scottish; named for course architect Dr. Alistair MacKenzie), Calamity Jane’s (short ribs, lamb burgers and oyster bar; named for founder Bobby Jones’ putter) and an outdoor bar/eatery make up the bulk of Berckman’s. Those who made it in say the menu consists of about 30 items, with choices of pasta, chicken, steaks and everything in between. The menu also includes a Taste of the Masters plate featuring small servings of the standard patron options from the golf course, i.e. pimento cheese, egg salad and Masters club sandwiches.

All food and drink is included with the price of your ticket. As is the standard at ANGC, there is absolutely NO TIPPING.

From the Van Sickle article, his insider even discussed the bathrooms. Apparently there are nine attendants scampering about to help you wash your hands, offer you a mint, etc. They even clean the floor-to-ceiling urinals immediately after you do your business and step away. There’s no truth to the rumor that they wipe your ass for you. If performing cleaning duties included one round on the golf course, I’d do that job for a week.

Would You Even Get To the Course?

I’m not sure I would. Reports are that the facility has 50 to 60 extra large screen TVs to show you the action from the golf course. If you’ve already been to the Masters a few times like I’m sure most of the big wigs in Berckman’s have, why leave? Of course, just like ANGC itself, Berckman’s is also landscaped to the point where no blade of grass, azalea petal, or pine straw is a millimeter out of place. A short path lined with azaleas leads patrons from Berckman’s to the 5th fairway to see the action on the course live.

The rough estimate circling the rumor world is that Berckman’s can handle about three to four thousand patrons at a given time in its 90,000 square feet of space. Business magazines estimate this facility would bring in $18 million annually to the club. Tickets to Berckman’s Place run $6,000 each and are good for all days of the week. Hope to see you at the bar in Calamity Jane’s next April.