Just a ho-hum day at the Masters, right? Twitter debates, more rules infractions, and the golf course once again shining through as the star of the week.

That’s where we stand with 18 holes left to play. It seems as though anyone outside of the 2 under group is dreaming if they think they can win. Realistically, I’d say -3 is the breaking point. I think 10 under is your winning score, and 9 under could get you in a playoff. It’s going to be fun.

So Who Ya Got?

Tough call, I said Sneds looked like THE guy when he won at Pebble, but that injury derailed him until this week and most people stayed away from picking him (I did too). Now he’s right where you’d expect and he’ll be tough to beat. When Sneds was in a similar spot in 2008 I rooted against him. I didn’t think he had the pedigree to be a major champion. He’s thrown that thought out the window now hasn’t he? I know El Pato has been there and done it, but folks forget about his collapse in the final group just a few years ago. 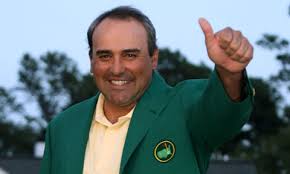 Tiger hasn’t broken 70 at the Masters since 2011 and he’ll have to put up no worse than a 66 to be in the hunt tomorrow. I can’t see it. Adam Scott, Kuchar, and Jason Day will likely be in it to the end. It was pointed out in our 3rd round live blog how many clutch saves Day was making as the round went along, then he faltered on the last few holes. Can he regain that form? That’s tough to do. The guy with the least amount of testy putts for par tomorrow might be the guy wearing green to dinner.

Pick your horse and hold on tight.

After a 45 minute snag in the set up of the chat software, SFG hosted its first live chat during tour action. I really enjoyed it and hope those that participated did too. We’ll learn from it and work out the kinks so it’s ready to go for the next time. When is the next time? I’m not quite sure. I might do it tomorrow, but it won’t be until the leaders are nearing the back nine. If not tomorrow I’ll make you plenty aware of the next installment, likely during the Players Championship.

1 Response to Masters Week: Round 3