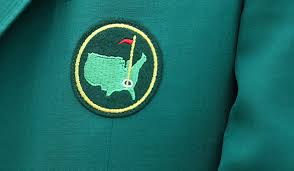 Like Christmas for Bill Gates’ kids, the 1st round of the Masters is never disappointing. Sure, some contenders didn’t play their best, but are any of them really out of it? Nope. Tiger, Phil, Rory…..not a one of them broke 70 yet all three could go low on Friday and make the weekend interesting. In fact, Tiger is right where he’s been for 3 of his 4 wins when he also shot 70 in round 1. The course looks fantastic and the leader board is star filled. Game on.

That’s the name of the 14th hole at Augusta National, not what’s growing on the lip of Tianlang Guan. You remember being 14, right? I could crack my voice and 80 on the same day, but wasn’t worth much else besides video games and eating my weight in junk food.  Yet here is Asian Amateur champ Tianlang Guan playing in the Masters for the 1st time and hovering near the cut line. 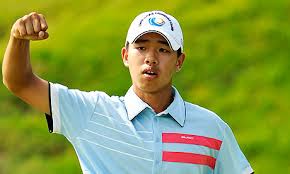 The fuzz-lipped pup from the far east had the Twitterworld taking bets on whether he’d break 80 just 24 hours ago. Hitting it quite short off the tee, TG is forced to hit hybrid or a wood into many of Augusta’s par 4s. Breaking 80 didn’t seem to be in the cards, but the kid blew that number away with a 73. He stuck a hybrid to 5 feet on the tenth to make birdie, then hit the green with a metal wood on 18 and holed out from 20+ feet for another one.  Those are probably more like eagles on the courses he is used to playing. Due to his play Tianlang turned into this years darling of Augusta and is making quite a name for himself, but don’t expect the magic to continue. I still think he’ll be lucky to make the cut and/or break 80 tomorrow. Guys hitting long clubs into ANGC greens are like dogs that chase cars.

Did You Say Magic?

So how is anyone surprised to see him on page 1 of the leader board today? I’m not, I had him in a few of my pools. Yet I’ll put the over/under on Fred’s Friday round at 72.5 and take the over, even with the course playing wet. If he betters that and stays near the leaders will someone please throw some cold water on Jimmy Nantz to rid him of his Freddie hard on. Yes, I know they’re college buddies and Nantz has a ‘I ❤ Fred’ tattoo on his ass, but I find Nantz’ calls of Fred’s rounds obnoxious and tiresome. He’s too emotionally involved. Sounds gay, doesn’t it?

I Didn’t See That Coming

Remember last year when Sergio told us he wasn’t good enough to win a major, he’s just playing for 2nd place? Yeah, cookoo, right? That mental state is why I didn’t think Garcia had a day like today in him. He was fantastic and really could have gone even lower. Last we saw him he was in a tree at Bay Hill and then taking a WD’d because of his bruised twat. That’s golf. He makes a total 180 and now leads after round 1. 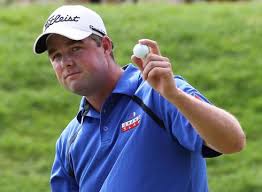 What about Leishman? The big Australian has almost zero major pedigree and hasn’t been around Augusta National but a handful of times. We didn’t see his whole round due to his tee time, but the highlights made it seem like he made everything. That’s tough to do for four straight days.

Then there’s Rickie. Double your opening hole on both 9s and still shoot 68? That’s incredible and gives you an idea of how good he was on the other 16 holes.

Tiger and Phil’s round 1 performances were predictable and easy to see coming. Phil’s Phrankenwood experiment seemed to go wrong, but would he hit a regular driver straighter? I doubt it. Will he keep Phrank in the bag for tomorrow? You bet your sweet ass.

You can throw Kuchar, Adam Scott, Snedeker, and Westwood in that group too. Just what you expect, right in contention with solid rounds. That’s a pretty good bunch to keep us engaged in the action tomorrow (not like we wouldn’t be anyway). If Rory can get a 68 or better in the barn he’ll be right there too.

Taylormade with the marking move of the day. They required their staff players to wear the same god damn shirt. Whomever made that decision should be fired on the spot. Imagine if Sergio and Dustin Johnson are in the same group on Saturday. MASS CONFUSION!!!!! Where’s the individuality we love about these guys? Where’s the style?

I just can’t wrap my head around this. It’s like 8 guys blowing 9 guys. Gay.

And just for you having to suffer through that, here’s your Paulina Gretzky fix for the day. One from her being spotted in Augusta and the other just for fun. 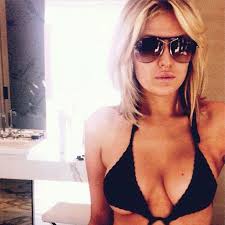 Doesn’t she make Lindsey Vonn look like a pig? Oh, you need to compare? Ok, here’s Vonn in a big hat near the clubhouse taken just after Tiger teed off.

I’ve always followed the theory that girls in big hats are trying to distract from their flaws, but what do I know?

Consider this your 2nd to last reminder that I plan on opening up a thread to all of you to provide live comments during CBS’s coverage on Saturday. Again, the more vulgar, the merrier…..or something like that. IF we do it, we’ll just have a blank thread with everyone commenting in it. If you’ve already commented here you likely won’t need to be approved again. If you haven’t, I’ll approve users on the go to make it work. Refreshing your page will show the new comments. That is all.

Tomorrow is promising so long as the severe weather blows through Georgia tonight. Cross your fingers.

8 Responses to Masters Week: Round 1