The Stars At Night Are Big And Bright…

Didn’t I say the other day that the Texas Open didn’t do much for me? Boom. I was wrong. My low expectations for this thing made this weekend’s golf thoroughly entertaining. Just when you thought it wouldn’t happen, just when I’d given up on the kid……Rory makes what seemed to me like a panicked decision at lunch last Friday to play in the Texas Open in San Antonio and finds his game. And it’s not as though this was something he really wanted to do. He did it based on his caddie’s input. 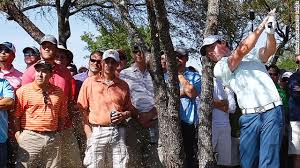 Besides locking himself out of his hotel room on Wednesday evening with only his shirt and pants on, Rory had a pretty good week. What can be looked at as cramming for a final exam the week before Augusta paid off in a big way. He told the world he needed more competitive rounds to sure up his game, and that’s exactly what he did. Facing some fairly tough conditions in the first three rounds with high winds on an unfamiliar golf course the young mick showed steady improvement but was yet to be spectacular as we’ve grown to expect. With conditions a bit more benign Sunday, World Number 2 went six deep for an impressive 66 showing that all facets of his game were on point. Just in time, wouldn’t you say? He damn near won the thing if not for Martin Laird’s incredible day.

As if we needed more excitement and story lines for the Masters, now we have $woosh Junior back from the abyss. Son of a bitch this week is going to be fun.

Where the fuck has Martin Laird been? I’d almost forgotten about the Scotsman until I saw  him hit a shot on TGC’s Saturday coverage of the Valero Texas Open (VTO). Laird admits he’s had a horrid year and just recently found something with his swing coach last week in Houston. Even better, he switched putters this week going back to the belly putter he’d won with 2 years ago at Bay Hill. And what do you know? Nine birdies later and the fucker is carding a 63 to take the title right out of the hands of McIlroy, Horschel, Hoffman, and others. ML’s win is the first by any non-American this year on tour, ending a streak of 14 tournaments won by Americans. 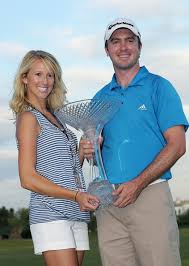 Laird was dominant today. He could do no wrong. While I don’t love the way he swings the club or uses the cheater putter, he’s easy to root for and he clearly deserved the victory in San Antonio with the way he outclassed the field. That is some way to get your Masters invite. Waking up Sunday morning he’s thinking, “shoot 63 today, win the tourney, course record, head to Augusta”. Check, check, check, check. What a nice little Sunday.

The photo above is from Laird’s victory at Bay Hill in 2011. That’s his wife who wasn’t in attendance today in Texas. She’s further evidence that a golf game that travels well and a large bank account can over come male pattern baldness to bag a hottie. Tabitha Furyk agrees. 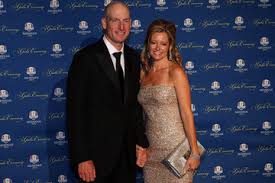 Speaking Of Furyk (And Other Contenders)

Jim Furyk showed up this week in Alamo-land based almost solely on the fact that he’d been told the course would suit his game from his fellow tour members. Of course it does. It requires precision, solid ball striking, and an ace-up-your-sleeve short game that can aide a player in survival of the notorious Texas spring winds. We should all have had Jim on our fantasy golf radar this week. How stupid does one have to be to take anyone else (cough, Poulter, cough, fucking Ian Poulter, cough)? Old man Furyk was rock solid all week but just like everyone else, he didn’t have enough to over come Laird’s Sunday masterpiece. However, he did have one of the shots of the day:

Yeah, I know Chalmers aced 16, but he wasn’t within 12 shots of the winner. Once Laird had this thing locked up, NBC had 30 minutes of air time to fill and 3 groups left on the golf course. Lucky for them, Furyk was (of course) still grinding it out for money and FedEx points when he stepped up to his third shot at 18 to provide the viewers with that Youtube gem.

Like Rory and Furyk, Billy Horschel and Charlie Hoffman didn’t do enough to hang with Laird when the dust settled. Horschel’s day was predictable. Johnny Miller alluded to it like he had a crystal ball at the close of Saturday’s action. Horschel is just too emotional, wired, and nervous to win under these circumstances (to get the Master’s invite, first win, etc.). He’s got plenty of game and I’m sure he learned a lot from being in contention the last two weeks. His behavior on the course very much reminds me of Bubba. Both are twitchy, nervous, vocal, and emotional. Miller’s point about Billy Ho’s eventual short coming was that Horschel was relying so much on short game and putting to save him that eventually the stress of the day would wear him out and his short game would fail him. Sadly for Billy, Miller gets the credit for calling a spade a spade.

Hoffman’s game is almost the exact opposite of Horshel’s, IMO. Yet Hoffman’s day ended almost before he teed off. He made double on 1 and hit it in the shit on 5 and barely escaped with a bogey. A bogey on 10 had Hoffman +3 on the day and NBC was thisclose to not showing a single shot he hit the rest of the telecast. Then Charlie ran off 6 birdies in 8 holes and eventually tied for 3rd. Tasty. Nice finish, bro.

The instant the last putt dropped in Texas it became Masters week. Thank god. Winter is too long and seeing that magnolias and azaleas means that spring has officially sprung. So get out your green jackets, slice up your pimentos, and tune your piano. Magnolia Lane awaits.