Darren Andrew Points Is A Thief

As an 11 year old in 1987 D.A. Points stole his mom’s putter right out of her golf bag and made it his own. A few state amateur titles won with it later and she’s apparently forgiven him for the petty crime. Points, best known for wearing his Lego belt buckle, won at Pebble Beach with partner Bill Murray in 2011 and has since struggled mightily to regain that form. This week, he went back to the trusty Ping Anser putter he took from his mom and the flat stick magic returned. 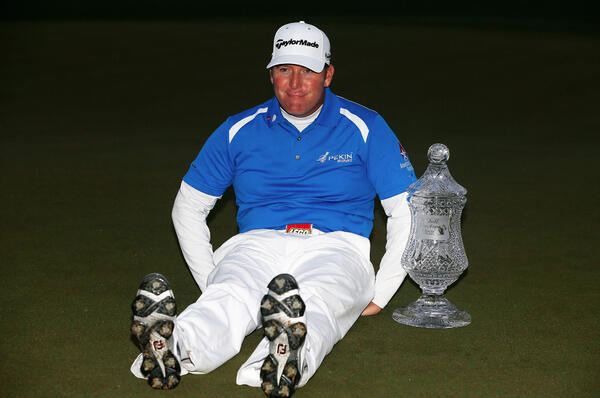 Points, #Dufnering above (we’ll cover that later), was hot out of the gate on Thursday firing a 64 to take the 1st round lead. He went low again on Sunday with a 66 to jump to the top of a packed leader board after shooting a pair of 71s in the middle rounds. Prior to this start Points had made 3 cuts all year and finished no better than 63rd in any of those events. Sounds a bit like Thompson’s recent win at the Honda, doesn’t it? Points clinched victory with a clutch par save on 18 to hold off Billy Horschel, Henrik Stenson, Dustin Johnson, and Ben Crane. His emotional outburst as the putt sank showed how much it meant to him to get back in the winner’s circle after his struggles. With Points’ win that makes 14 straight wins on tour for American players. USA! USA! USA!

I didn’t get a great look at it, but from the description NBC’s Dan Hicks gave of it, Point’s putter sounds like an original copper Anser made by Ping in the 80s. Most likely it’s the version shown below with ‘Phoenix’ stamped in the back of it. I own one and used it for years until I became a Scotty Cameron whore. If you have one, check the back to see if it says ‘Scottsdale’ or ‘Phoenix’. I believe the Scottsdale version is some sort of collectors item worth a few clams. 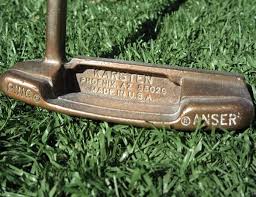 Mine had an unsightly demise. In the final round of a tournament I played in during college and went from tied for 2nd to about 20th due to 40 putts I took for the round. I recall strongly fighting back my urge to throw my Anser in the lake (I blamed the arrow, not indian). Instead, as I walked of 18 the shaft broke as my knee accidentally ran into it and it hasn’t been in my bag since. Ironically, the reverse of the Points case occurred here. My father began using the re-shafted version of it about 5 years ago.

Henrik Stenson’s game is back from the dead. His 66 today vaulted him up the leader board to a position that gave him enough world ranking swag to bump this week’s Euro Tour winner from the top 50. Why does this matter? Today is the cut off for Masters invitations. By making the top 50 Stenson will be playing in the first major of the year while Marcel Siem (the pony tailed guy that beat Luke Donald last month in the match play) will not. If you’ve totally forgotten who Stenson is, his underwear shot from the hazard at Doral might refresh your memory.

Young Billy Horschel impressed me with his play at the SHO. I think it’s quite a feet to bounce back from the final round 85 he had at Bay Hill last week and be a mere missed putt away from a playoff to get your first tour win. NBC also filled us in on the streak Horschel has going on. He’s made 20 consecutive cuts on tour, the longest of any player right now. He could win soon and if he’s playing next week in San Antonio I suspect he’ll be a popular pick. 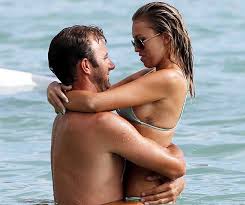 Dustin Johnson and Phil Mickelson have both won on tour this year, yet both have pretty much fallen off 1st pages of leader boards since their victories. I can’t blame DJ, Paulina Gretzky is a nice distraction to have. What’s Phil’s problem? Honestly, I think he gets bored. Whatever the case, both Bitch Tits and Johnson were back on their games as of today. Phil got hot early to charge into contention and DJ did the same. It’s a great sign for these two and golf fans that they’re peaking with the Masters on the horizon. If you’re scoring at home, the BTTOM (Bitch Tits Tax O-Meter) has been updated to reflect the $59K in taxes Phil owes from his four days of work in Texas.

Rory also made news in Houston this week, albeit not for his play. He looked better at times, dropping putts and making birdies, but inevitably a large number would come out of nowhere to ruin his round or halt momentum. With Rors riding the cut line most of Friday his team decided to add next week’s Texas Open to his schedule. Seems like a panic move to me.

On Thursday the Johnny Funtimes at Deadspin published a story about Jason Dufner attending a luncheon for the Byron Nelson tourney in Dallas. The event was intended to kickoff some of the charity work that coincides with the tournament, which Duf won in 2012. The lunch somehow lead to Jason in a classroom full of grade school kids and the picture below surfaced.

If you’re not getting it, Dufner is the guy in red who looks like he’s auditioning for Weekend At Bernie’s 3. Deadspin’s only comment was that he didn’t look amused, but the #twitternerds ran with it and now golf has it’s own version of Tebowing…….it’s called Dufnering. Caption contests and mimics have popped up everywhere with folks looking annoyed, exhausted, and packing a dip. Here is a sampling for your enjoyment:

Hopefully Dufnering’s 15 minutes are up soon.

Again, I’m not going to say much about what NBC did or didn’t do. It just wasn’t notable and they’ve given us about 8 straight events now. What is there to say? I’m not going to tell you how much Peter Jacobson annoys me or how fucking tired I am of this crew. I won’t do it. NBC did have a little fun as they showed Roger Maltbie and others #dufnering. And hey, we didn’t have old Johnny Miller to kick around this week. The Peacock moved Jake into the tower at 18 to sit with Hicks in Miller’s absence.

What NBC and TGC did get right was to move the live action from the closing of the tournament to TGC and interrupt whatever the fuck the Golf Channel was showing at the time. A 2 hour and 40 minute storm delay forced their hand with this. Would CBS have done the same? I don’t know. What I do know is that 15 years ago if this had happened the tournament would have finished like a tree falling in the forest.